It's the working from home uniform that will go down as a symbol of 2020: a nice shirt on top for Zoom meetings paired with pyjama pants and ugg boots below, for comfort.

Participants in the much-loved annual scarecrow competition in Rossmoyne Street, Thornbury, love to capture the zeitgeist, and longtime local Heidi Marfurt has gone for realism in her newly created piece, named ISObelle.

"Yeah, it's me," Ms Marfurt admits, although she prefers leggings over pyjama pants.

"I have a little rule that I’m not wearing my pyjamas or dressing gown when I start work."

ISObelle sits at her poky desk out the front of Ms Marfurt’s house with her laptop, because it’s the only place the Wi-Fi works. The desk is actually bigger than the one Ms Marfurt uses in the dining room.

But like ISObelle, "I have got hair like a mop. It’s definitely in need of some salon attention." 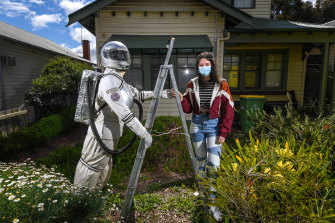 Ms Marfurt said scarecrow making has been a great way to be creative during lockdown, using objects from the house.

Over the the past eight years of scarecrow season, as it's now called, residents have gleefully depicted Prime Minister Scott Morrison in a rubbish bin, politician Bronwyn Bishop in a helicopter, an astronaut (last year’s winner) with a climate change message and even a murder of crows defying the scarecrows.

"We could all do with a bit more joy in our lives," Ms Marfurt said. "And people are starting to get a bit bored with a walk down the street, so this is going to liven things up."

Since she installed ISObelle on Monday, "I’ve seen little kids looking over the fence and pointing to it, all excited and going, 'hey what’s that lady doing in the front yard'?"

Rachel Levin, who like Ms Marfurt helps run the competition, said Rossmoyne rummage – the front yard garage sales usually held in the street at the same time as the scarecrows come out – has been cancelled this year.

But entries for the scarecrow competition close on October 24, with the judge – author and broadcaster Tony Wilson – set to announce the winners by video on the Rossmoyne Street Thornbury Facebook page on October 28.

Prizes include a sheet of Australia Post stamps with the winning scarecrow’s image on them, a Darebin Monopoly game and a jigsaw depicting Darebin Parklands.

Categories include the LOL scarecrow, friendliest and scariest scarecrows and best use of repurposed materials.

The Darebin Libraries Facebook page has a "how to build a scarecrow" video.

Ms Levin said that this year entries would be accepted from within a five-kilometre radius of Rossmoyne Street, Thornbury. Entrants can email a photo of their scarecrow and their name and address to [email protected] and the photo will be posted on social media.

"I guess this year with COVID-19, and it’s such a good iso activity, we just say, anybody who wants to join in, they can join in."

Get our Coronavirus Update newsletter for the day’s crucial developments at a glance, the numbers you need to know and what our readers are saying. Sign up to The Sydney Morning Herald’s newsletter here and The Age’s here.