Three people have been arrested following a dramatic police pursuit in Melbourne’s north, during which two of the accused allegedly forced entry into a home and stole a car to evade officers.

Victoria Police said officers first spotted a white Mitsubishi ASX, believed to be stolen, travelling on Lillian Farren Way at Reservoir about 10.50am on Friday. 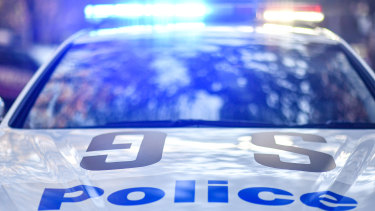 Three people – two women and a man – were arrested following the pursuit on Friday morning.Credit:Sam Mooy

When they tried to pull the car over, the driver allegedly kept driving, leading officers to call in the air wing, which tracked the vehicle towards Merri Creek.

Police alleged the driver eventually came to a stop and a 31-year-old woman from Mildura got out and fled on foot. Officers arrested her, and she was assisting police with their enquiries on Friday evening.

The driver of the Mitsubishi then allegedly took off again towards Reservoir with another passenger who remained in the car.

Police alleged the pair dumped the vehicle, forced entry into a Churchill Avenue home, stole a red Mazda 3, and almost collided with a police car parked outside the property.

Police followed the Mazda as it continued “at speed” through a number of suburbs, before entering a shopping centre car park on Murray Road at Preston.

The pair allegedly dumped the car, before committing an aggravated carjacking and stealing another Mazda – this time, a 626 model– which officers followed to Montgomery Street at Moonee Ponds.

Police said it was there they arrested the two occupants of the car, a 37-year-old Robinvale man and a 20-year-old Mildura woman, who were assisting them with their enquiries on Friday afternoon.

“Luckily, no police or members of the community were injured during the incidents,” Victoria Police said in a statement.

Police urged any witnesses to the alleged crime spree to contact Crime Stoppers on 1800 333 000, or on their website.

Kobe Bryant Staples Center memorial tickets will be to sale to public – at poignant price of $24.02 – The Sun