Home » World News » Time now for all states to pull together

As Victoria entered its fifth lockdown this week there were worrying signs Australia’s response to the COVID pandemic had descended into an internecine blame game.

States were slamming borders shut (again). Victoria (rightly) wondered why NSW would be getting a more generous Commonwealth handout to cover COVID joblessness – to which the federal Treasurer responded that the Victorian government was being “petulant, childish and playing politics”. 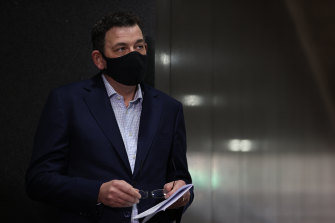 Even the Prime Minister, whose modus operandi has largely been to skate above the details and bask in Australia’s overall COVID success, this week appeared to blame the Australian Technical Advisory Group on Immunisations for slowing the vaccine rollout.

Premier Daniel Andrews usually prefers a straight bat but neither could he resist a dig at NSW Premier Gladys Berejiklian. “You only get one chance to go hard and go fast,” he said, announcing our five-day shutdown in a way that suggested Sydney had done neither.

No, non-essential retail would certainly not remain open, he said (as it had in Sydney). And, pointedly, “There will be no browsing.” He might as well have added, as Victoria recorded a spike in new cases after several days of zero community transmission, thanks a bunch, Gladys!

Luck plays a part, but Berejiklian must shoulder much of the blame for the burgeoning outbreak. She was determined to stay out of lockdown as long as possible; possibly past the point of no return, keeping the state “open for business” and confidence in their once “gold standard” contact tracers. 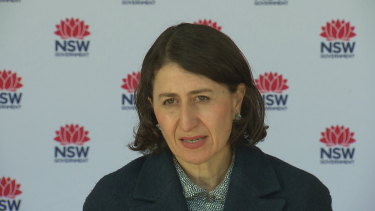 Gladys Berejiklian has toughened lockdown rules after a surge in new cases.Credit:Nine News

No wonder compliance in Sydney is patchy. Modelling by scientists at the University of Sydney has estimated that only 40 per cent of Sydneysiders are staying home, “inadequate” for outbreak control. Confused messaging around retail and what constitutes “exercise” and “recreation” (hiring rental boats for a joyride is apparently legal) has suggested to many they needn’t take lockdown particularly seriously.

Unless, that is, you live in Sydney’s less affluent, more diverse western suburbs, where they send in mounted police to patrol the streets (cue screeches about over-reach and the humbled Premier’s subsequent apology). As for those senior NSW ministers who advocated abandoning a zero-case strategy? What a mess.

Yet Berejiklian’s failure to control the virus without a hard lockdown has changed the landscape. Victoria is no longer the pariah state: we’re the ones who have successfully beaten COVID in four previous lockdowns, and will no doubt do so again.

As George Megalogenis wrote in these pages yesterday, Scott Morrison would not have even entertained the notion of compensating Victorians from the first day of our snap lockdown if the NSW go-slow strategy had worked. Morrison, he wrote, “must now accept his share of humble pie along with the rest of the Berejiklian government”.

On Saturday, Berejiklian belatedly tightened the lockdown rules but it remains to be seen if this is shutting the door to the stable, or the removalists’ pantechnicon, after the horse has well and truly bolted.

No wonder Martin Pakula, Victoria’s Minister for Industry Support and Recovery, was feeling magnanimous on Friday afternoon when asked if he blamed Sydney for Victoria’s lockdown. “I blame the virus,” he said generously. “They’re in a difficult situation, and they’re dealing with it in their way.”

A little compassion goes a long way, and the lesson is clear for all: the time for politicking and petty point-scoring is over.

Each state must learn from the mistakes and successes of the others, working together on a national approach both to defeating the inevitable outbreaks, and – most important of all – doing whatever is necessary to make the vaccine available to every Australian.

Gay Alcorn sends an exclusive newsletter to subscribers each week. Sign up to receive her Note from the Editor.