Beach hut no bigger than a garden shed in sought after spot on the Essex seafront goes on sale for £65,000

A tiny beach hut no bigger than a garden shed has gone up for sale with a staggering £65,000 price tag.

The unassuming 12x10ft beach front chalet is painted a bland shade of dark brown and offers just one room inside.

The property also boasts a 10-foot wide by 18-foot long veranda out the front – and not a lot else.

Despite the eye-watering price tag Rouse Estate Agents have already had an interested party wanting to put an offer in. 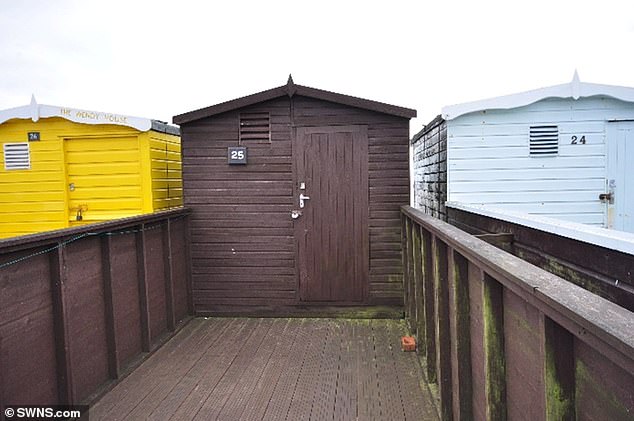 The hut, located at the sought-after Wailings end of Frinton-on-Sea beach, in Essex, was only listed by Rouse last week but it does not look like it will be on the market for too long.

A spokesman for Rouse said that the high price tag and increased demand is due to more people staying close to home rather than travelling abroad for holidays.

The estate agent said: “The owner wanted us to put it up for sale for £65,000, just to see what would happen, so we did.

“Already we’ve had two people call to book viewings – and one of them has even said they want to put an offer in.

“It has amazed us in recent years how much the prices for beach huts have gone up.

“But I think, especially now, with people staying at home and not being able to travel abroad for holidays, that is driving popularity up.”

The shed on stilts boasts a slightly lacklustre and dull looking paint job, and the internal condition of the hut remains somewhat of an enigma as even Rouse have not been inside to photograph it.

But its key selling point is the fact it overlooks the glistening North Sea in one direction, and the picturesque Frinton Golf Club in the other.

The spokesman for Rouse added: “We cover about a mile and a half along the seafront, and the beach huts down that end are definitely the more expensive ones.

“We’ve also had a couple of other huts in that area sell for around £45,000 in recent years.

The prices are just going up and up.”

The current £65,000 asking price for this latest beach hut sale in Frinton seems like pocket change compared to beach huts elsewhere in the country.

Back in July, a bidding war broke out on a 12×10 foot beach hut in Christchurch Harbour, Dorset, which ended up selling for a whopping £330,000.