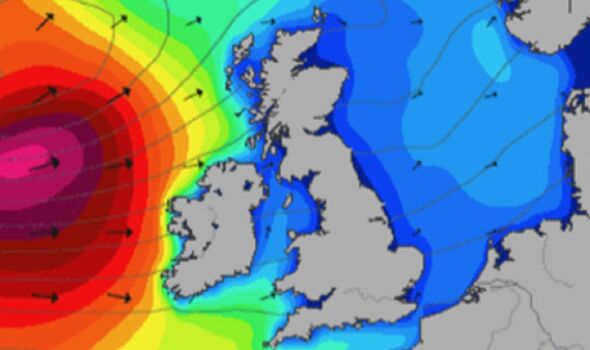 As Britons take cover from the incessant deluge, forecasters warn a barrage of downpours will strike ‘over and over again’ for another fortnight at least. Swathes of the UK are on flood alert through the rest of this week as wind, rain and thunderstorms lash the nation.

Government meteorologists have urged people in high-risk areas to keep up to date with evolving forecasts as they extend warnings for disruptive weather.

Jim Dale, meteorologist for British Weather Services, said: “We are in the middle of a motorway coming in from the Atlantic, and I think we are going to stay in this regime of wet, windy and sometimes thundery weather for the next fortnight.

“Western and north-western regions are looking at huge amounts of rainfall through the coming days, and this could hit places that never really dried out even during the summer heatwave.

“Some places are going to become shockingly wet and at risk of floods as we go through the rest of January.”

Volatile low-pressure systems will be picked up by the jet stream before spawning multiple storm systems to be hurled towards the UK, he warned.

He said: “The focus is firmly on the wind and the rain this week, and as these systems form in the Atlantic, they will get steered in by the jet stream.

“The jet will also pick up secondary lows coming off these systems, and these will add to the unsettled conditions.

“This pattern of wet and windy weather will ebb and flow through the week as the jet stream ebbs and flows.”

The Met Office has issued a warning for up to four inches of rain today across Wales and north-western Britain.

A barrage of stormy weather fronts will plough into the UK from today, according to Met Office meteorologist Alex Deakin.

“The general theme this week is the jet stream streaming in from the Atlantic powering low-pressure systems and their weather fronts along.

“The weather is repeating itself over and over again.”

Another cyclonic system poised to smash Britain at the end of the week will whip up strong winds in parts, he added.

He said: “On Thursday, in parts of the west, the rain could be heavy, and this could cause disruption and the potential for flooding, but temperatures will back into double figures for most.

“We will be back to blustery showers for Friday, and the position of a low will determine how strong the winds are.”

Western regions will bear the brunt of the rain today as environment officials issue a raft of flood alerts and warnings.

A spokesman said: “On Tuesday, local river and surface water flooding impacts are probable in parts of the Northwest and the Midlands, and possible more widely due to widespread heavy rain.

Weathertrending meteorologist John Hammond added: “Through the week ahead there is going to be a lot more rain.

“We are getting to the stage where river levels are rising, and groundwater are beginning to rise to, and flooding could be an issue if it keeps on raining.

“There is no sign of a prolonged settled spell in the near future.”

Threshold for calling confidence vote in UK PM May has nearly been met: eurosceptic lawmaker