Rail strikes are set to get WORSE as train drivers on up to £71,000 a year vote on industrial action in move which union bosses predict will be ‘far more disruptive’ than last month’s stoppages

Commuters can expect ‘massive’ disruption this summer, the head of the UK train drivers’ union has warned after his members voted on their first national strike since 1995.

Mass walkouts by train drivers by the workers over pay within the coming months would compound the country’s travel chaos and be the latest in a wave of walkouts that have raised fears of a ‘summer of discontent’.

Aslef, the union representing the drivers, held a ballot on industrial action that coincided with a similar vote by the TSSA union that represents staff in stations and ticket offices.

The votes came shortly after the country’s rail network ground to a halt after the RMT went on strike last month, with the union threatening to hold further walkouts later in the summer. 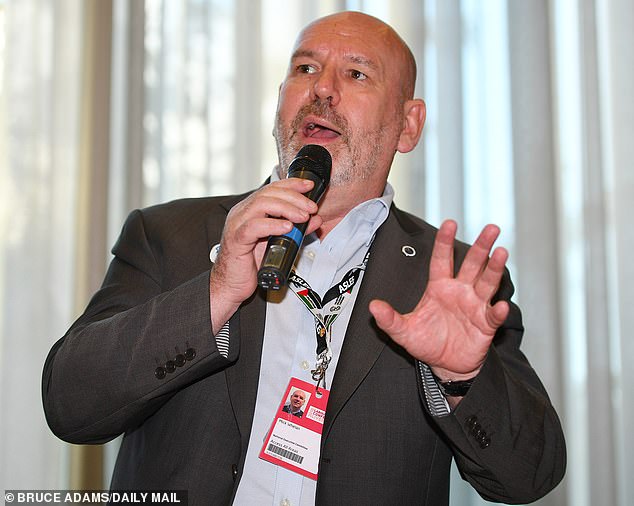 Aslef – led by Mike Whelan – is balloting drivers at 10 train companies, with the first results due next week

The unrest amongst union members is largely attributed to spiraling inflation as worker’s struggle to make ends meet on their current pay packages.

Aslef is balloting drivers at 10 train companies, with the first results due next week.

‘It will be far more disruptive than it has been in the past. We do not go on strike very often,’ Mick Whelan, general secretary of drivers’ union Aslef, told the Financial Times.

Staff at three companies have already voted in favour of strike action and Whelan said it was ‘likely’ that walkouts would be coordinated. This would in effect lead to the first national drivers’ strike since 1995.

‘We believe [strikes] will have a massive effect,’ he said, adding: ‘There will be a summer of disruption.’

Aslef staff have been offered a 2 percent pay rise as well as money saved from productivity gains, such as changes to shift patterns.

However, Whelan said his members deserve an increase closer to inflation, which is projected to hit 11 percent by October.

The TSSA is also threatening action, with results from ballots at 10 train operators and Network Rail due in the next two weeks. 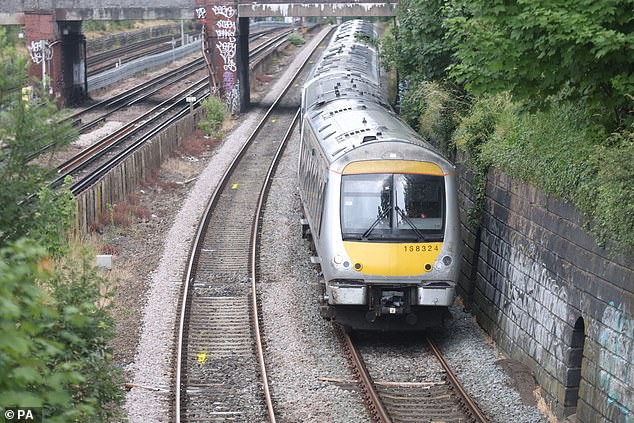 Staff at Avanti West Coast voted ‘overwhelmingly’ in favour of industrial action in a dispute over pay, job security and conditions last week.

Manuel Cortes, the TSSA’s general secretary, warned ministers to ‘take note’ of workers’ decision to strike and that the result was ‘only the beginning’.

Whelan denied that the three unions would coordinate their industrial action, yet the large number of ballots sent out across the industry means some senior rail executives are resigned to a summer of escalating disruption.

Two industry executives said if drivers at all companies walked out simultaneously, the network would run less than 10 percent of normal services.

The government has berated the unions for causing disruption to people’s lives and are now threatening new ‘minimum service agreements’, which would mean that a certain number of services would have to be maintained in the event of a strike.

Transport secretary Grant Shapps has also stated he wants to introduce a new law that would make it harder for unions to strike unless they adhere closely to the wording of their initial ballot.

In a statement the government said: ‘We want to see rail unions engage fully with their employers, instead Aslef are first seeking to cause further misery to passengers by joining others in disrupting the rail network,’.

Arrest protest mobs! Priti Patel calls on police to use new powers to break up fuel demonstrations as day of action hits motorways and summer of chaos looms

Following a day of disruption, the Home Secretary said officers should arrest and charge drivers behind ‘go-slow’ protests.

Her broadside came as a Tory MP warned that rising anger at the soaring price of filling up could see Canadian-style ‘Freedom Convoy’ blockades targeting London. A veteran of the fuel protests that paralysed Britain in 2000 is helping to co-ordinate what organisers hope will be a ‘summer of discontent’.

Demonstrators who cause disruption on the roads risk stiffer punishments under measures that came into force earlier this year. 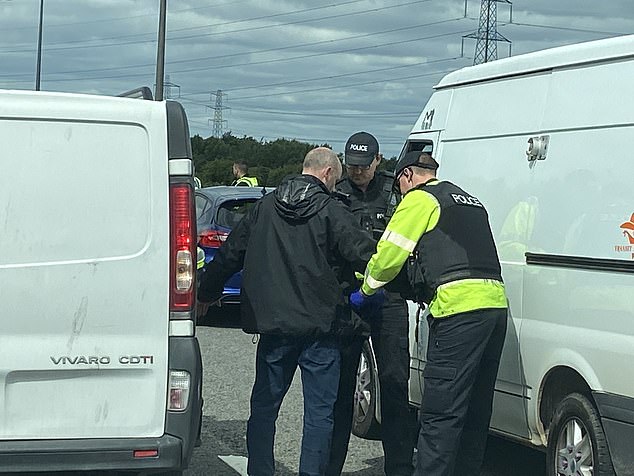 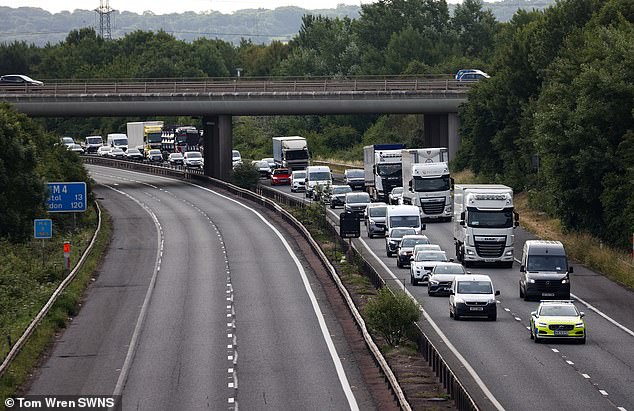 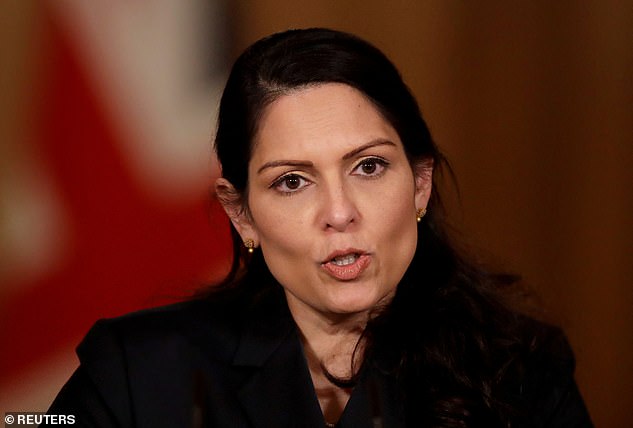 They were designed to combat protests by groups such as Extinction Rebellion but would also apply to the fuel campaigners.

The maximum penalty for ‘wilful obstruction of a highway’ was increased to six months in jail and an unlimited fine. Previously the offence carried only a low fine.

A Home Office source said last night: ‘Through our Police, Crime, Sentencing and Courts Act, we have given the police a wealth of powers to deal with disruptive and damaging protests, including imprisonment and unlimited fines for those blocking a highway – actions which inflict further pain on those affected by rising prices.

‘The Home Secretary would encourage and support the police to make use of all the powers available to them. Forces need to move people on.

‘These protests are blocking people from getting to work and from carrying out other vital journeys – this is not about whether you believe in the cause or not.’ 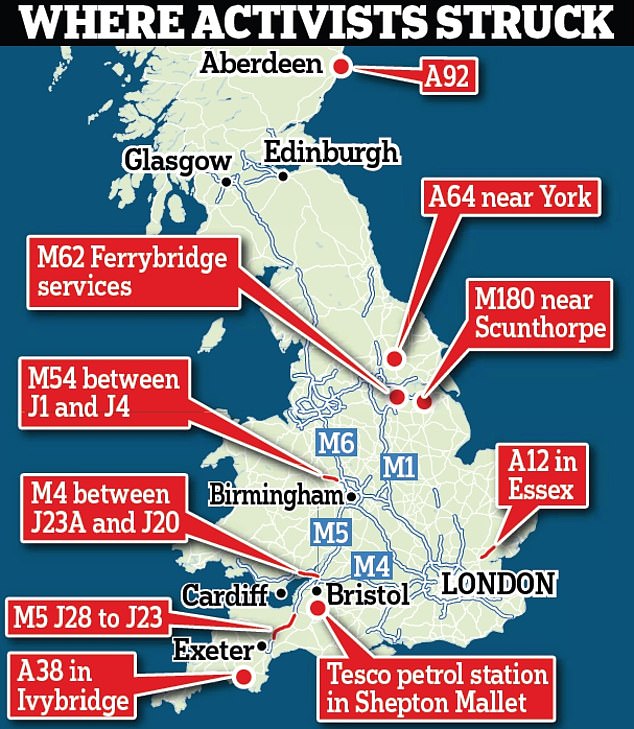 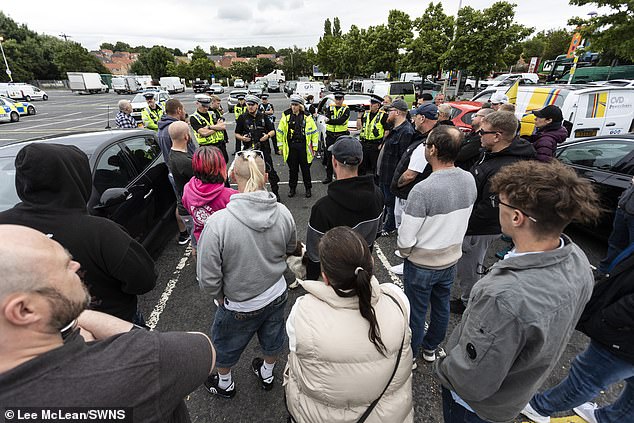 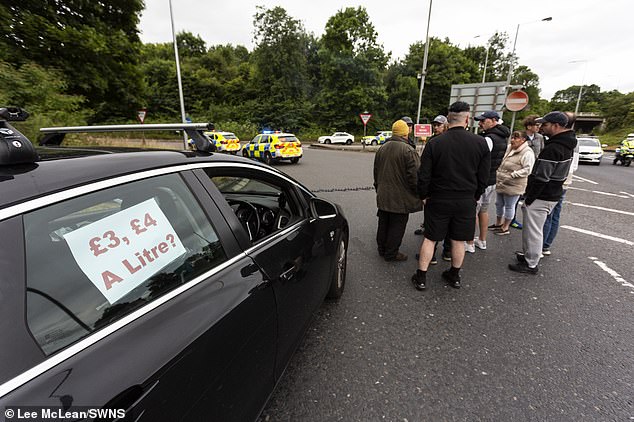 In a campaign organised on social media, drivers descended on agreed gathering points early yesterday morning, with the Prince of Wales Bridge between England and South Wales closed both ways.

It prompted Bristol airport to advise travellers to allow extra time for their journeys.

The M54 in Shropshire and M62 in West Yorkshire were also disrupted by separate protest convoys, with a Tesco petrol station in Shepton Mallet, Somerset, also targeted.

Farmer Andrew Spence, who targeted a Shell plant at Jarrow, South Tyneside, in demonstrations 22 years ago, claimed yesterday’s action was ‘just the start of things to come’. He added: ‘We’re promising a summer of discontent – this is only going to get bigger and bigger.’

Mr Spence, 55, from County Durham, said the advent of sites such as Facebook had transformed his ability to mobilise people angered by rising fuel prices.

‘Social media is what makes people stand up and take notice,’ he said. ‘That’s something we didn’t have in the early 2000s.’ 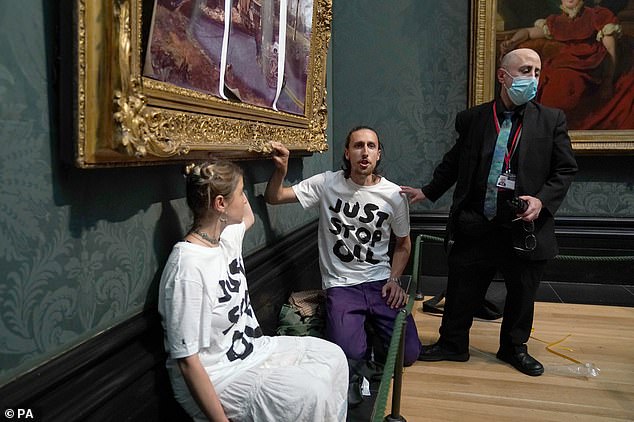 Mr Spence said that blockades of refineries had ‘not been ruled out’. Conservative MP Robert Halfon called for Chancellor Rishi Sunak to go further than the 5p a litre reduction in fuel duty implemented in March’s spring statement and said the growing wave of anger should not be ignored.

‘I don’t want anything that disrupts people in their ordinary lives,’ he said. ‘But I’m worried that this is a precursor to even more protests that are going to spread around the UK. If we’re not careful, we’re going to have a Canadian-style situation, with truck drivers descending on Parliament.’

Canada’s so-called Freedom Convoy in February escalated from anger at Covid vaccine rules into a wider campaign and a three-week occupation of the capital, Ottawa.

Among those taking part in the protest in South Wales yesterday was welder Richard Dite, who risked six points on his driving licence and a £200 fine by filming the convoy on his mobile phone from the wheel of his van. Shouting ‘give us our country back’, the 44-year-old was in one of about half a dozen vehicles in a small procession on the M4.

The protests come at a time when fuel duty and VAT make up 85p of the average £1.91 for a litre of unleaded petrol, according to the RAC.

The wave of price hikes has been driven by global oil supply issues after Russia’s invasion of Ukraine.