This is the shocking moment a man is filmed risking his life while surfing on a Merseyrail service in Liverpool.

The footage was posted on YouTube by a man calling himself Kain Hogg, 21, which showed him standing on the coupler between two carriages.

He then clambers up a ladder onto the roof of the train which is speeding between stations. 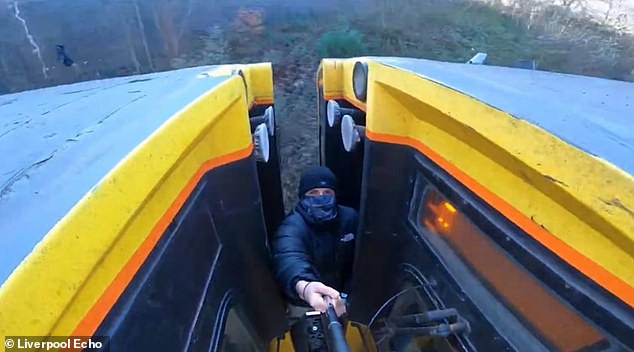 This is the moment a man calling himself Kain Hogg, 21, clambered out between carriages of a Merseyrail service before climbing on the roof of the train to go ‘surfing’ 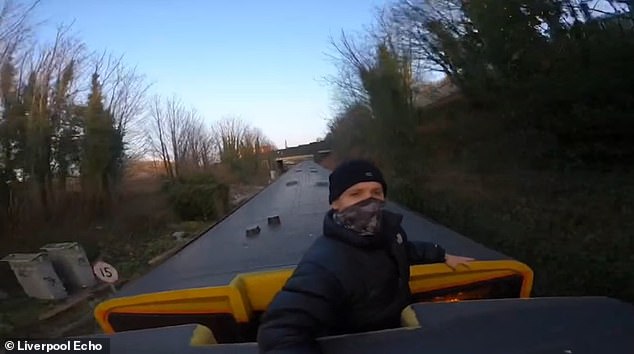 British Transport Police have described the stunt as reckless and are seeking information from members of the public, claiming Hogg was ‘trespassing’ on railway property

The young man, who is using a selfie stick claims the stunt is ‘very dangerous’.

In one train surfing’ attempt, Mr Hogg said things got ‘sketchy’ when he almost slipped.

He also admitted how at one point his coat got stuck to the gangway connector with a bridge only half a mile away.

He said: ‘I train surfed on March 2. I’ve been doing climbing and adrenaline-based activities for almost four years. It’s a very dangerous thing to do, one slip and I’m gone, literally.’

Mr Hogg, who describes himself as an adrenaline addict, added: ‘Train surfing in the UK is definitely not sustainable so I won’t be carrying on doing it.

‘I’ve done this for a long time, I know what I’m doing but nobody can prepare for an accident to happen. That’s why it’s so dangerous.’

Greg Suligowski, Head of Communications at Merseyrail, said: ‘It is extremely concerning to see this video which appears to show an individual trespassing on the railway, placing themselves and others at significant risk.

‘We will be working closely with British Transport Police to identify those involved so that appropriate action can be taken. 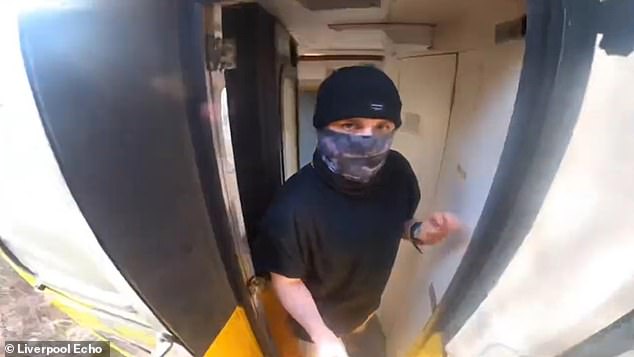 Hogg, pictured, claimed he had been surfing on trains several times describing it as an adrenaline rush

‘The non-public areas of the railway can be a very dangerous environment and I would urge people not to attempt to access them under any circumstances.’

Chief Inspector Dave Rams said: ‘Officers are aware of a video on social media showing a man “train-surfing” on a train in Merseyside and are currently investigating.

‘So called “train-surfing” is incredibly dangerous and can very easily result in death or serious injury.

‘It is beyond comprehension that someone would risk their life in this way for a social media video.’

Woman, 46, stabbed man 50 TIMES in neck, chest and stomach before killing herself in suspected murder suicide'