Historical contents of the Queen’s cousin’s former mansion goes up for auction: Treasures from Duke and Duchess of Gloucester’s 40-bed country estate – which they moved out of in 1995 because it was to expensive – are set to fetch up to £1.7m

The historical contents of the Queen’s cousin’s former manor house are being sold at auction and are set to fetch an impressive £1.7 million.

Barnwell Manor, in Northamptonshire, is the former home of Prince Richard, the Duke of Gloucester, and his wife the Duchess, Birgitte van Deurs.

The royal couple lived at the sprawling Grade II-listed property but moved to Kensington Palace in 1995.

It later became the home of one of Britain’s leading antique dealers, which has occupied the 436-year-old countryside manor house since 1999.

Now, an Aladdin’s Cave of fine art and decorative furniture from the house dating back centuries are set to go under the hammer.

The 343 items have been given an eye-watering guide price of between £1.1 million to £1.7 million and will be sold by Dreweatts Auctioneers on September 7 and 8. 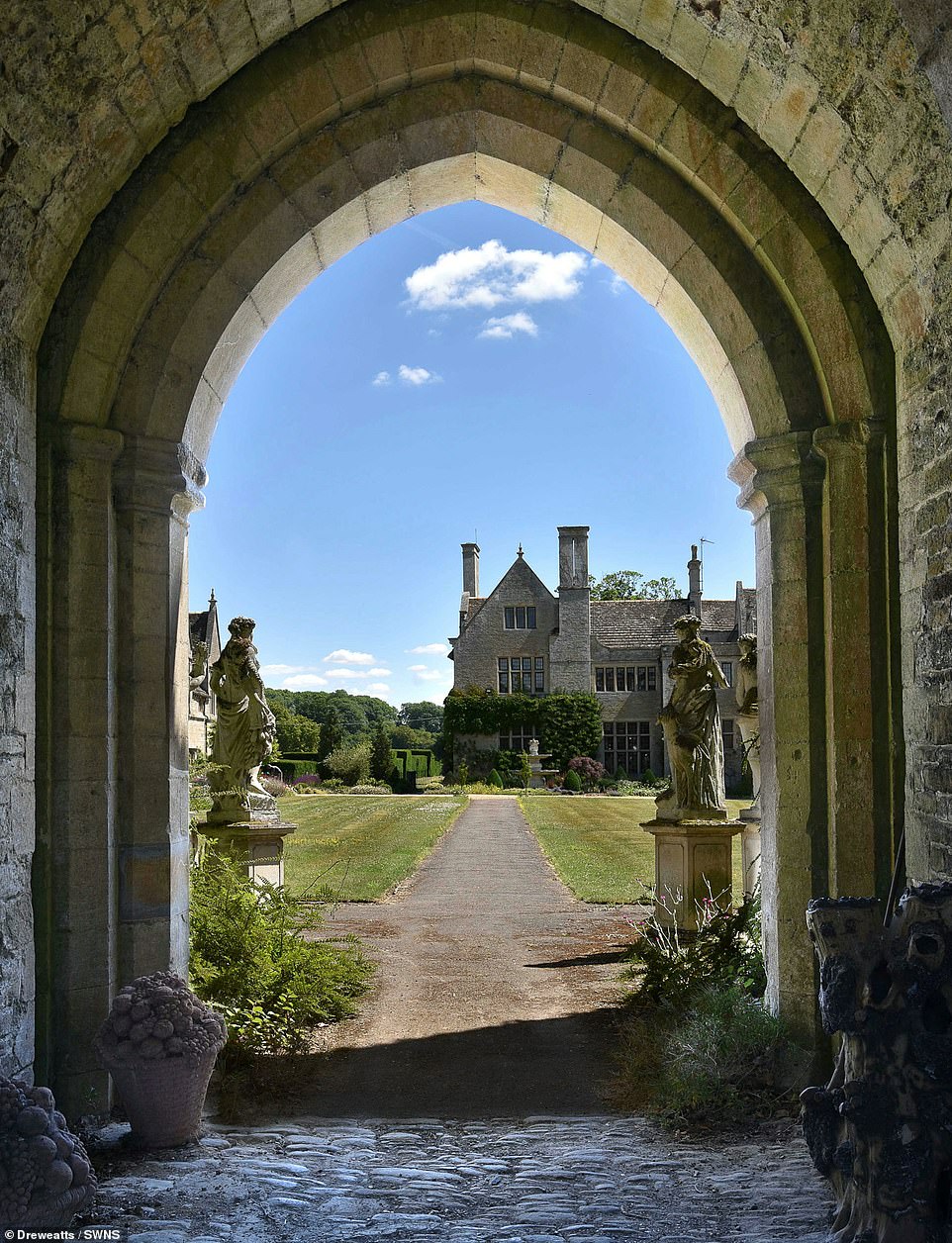 Barnwell Manor, in Northamptonshire, is the former home of Prince Richard, the Duke of Gloucester, and his wife the Duchess, Birgitte van Deurs 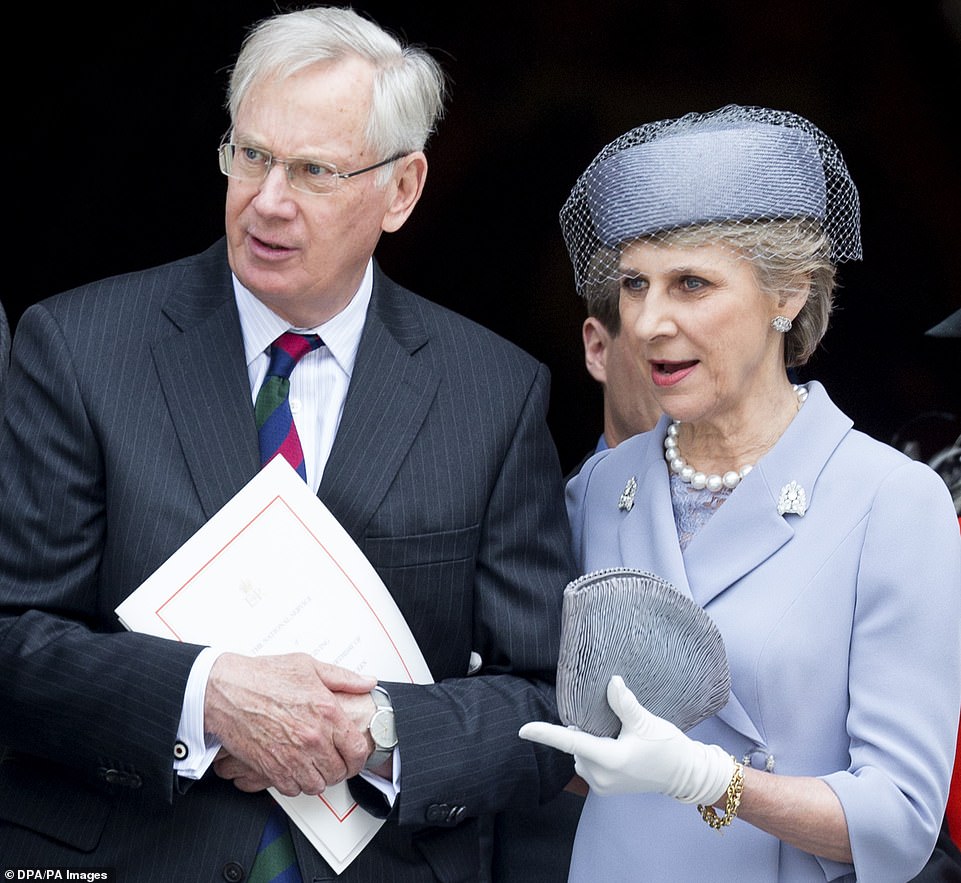 Prince Richard and his wife Birgitte, the Duke and Duchess of Gloucester. The duke is the Queen’s cousin, his father Prince Henry was the younger brother of King George VI 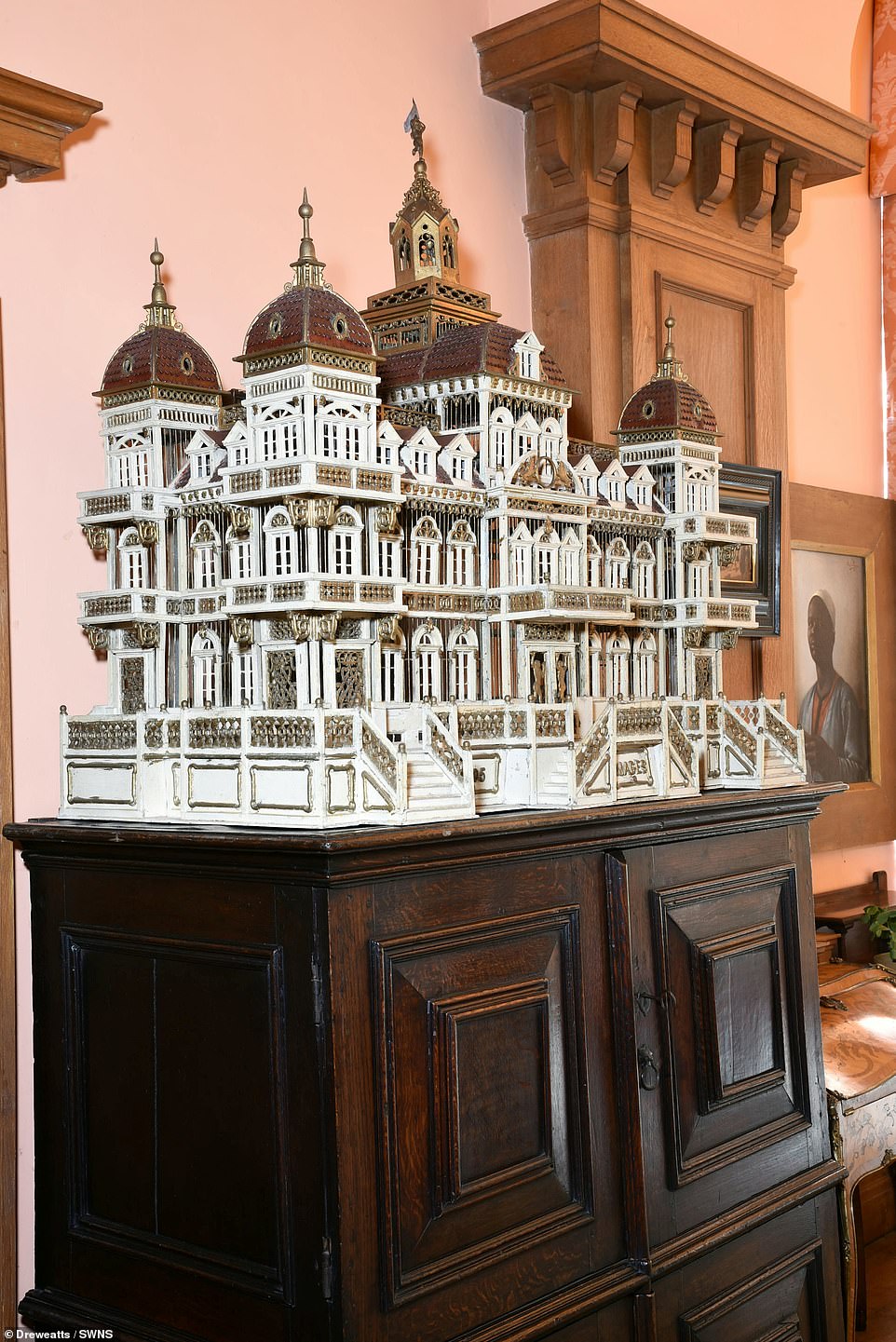 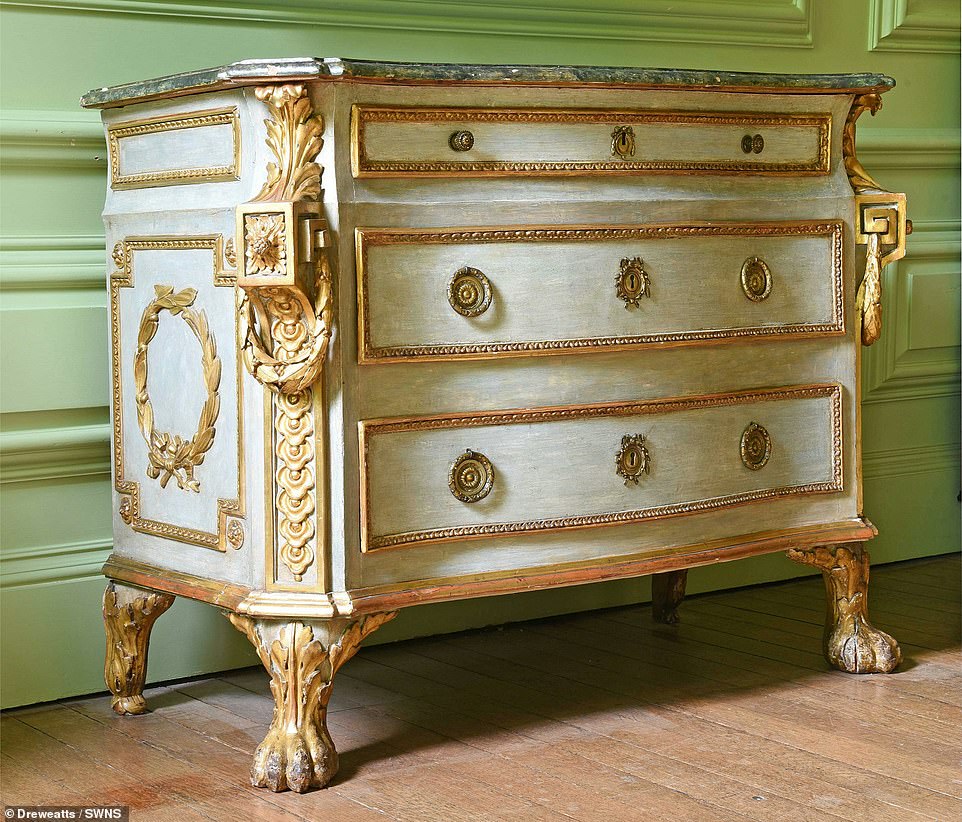 An Italian painted and parcel guilt commode, made in Rome circa 1760, is among the goods being auctioned 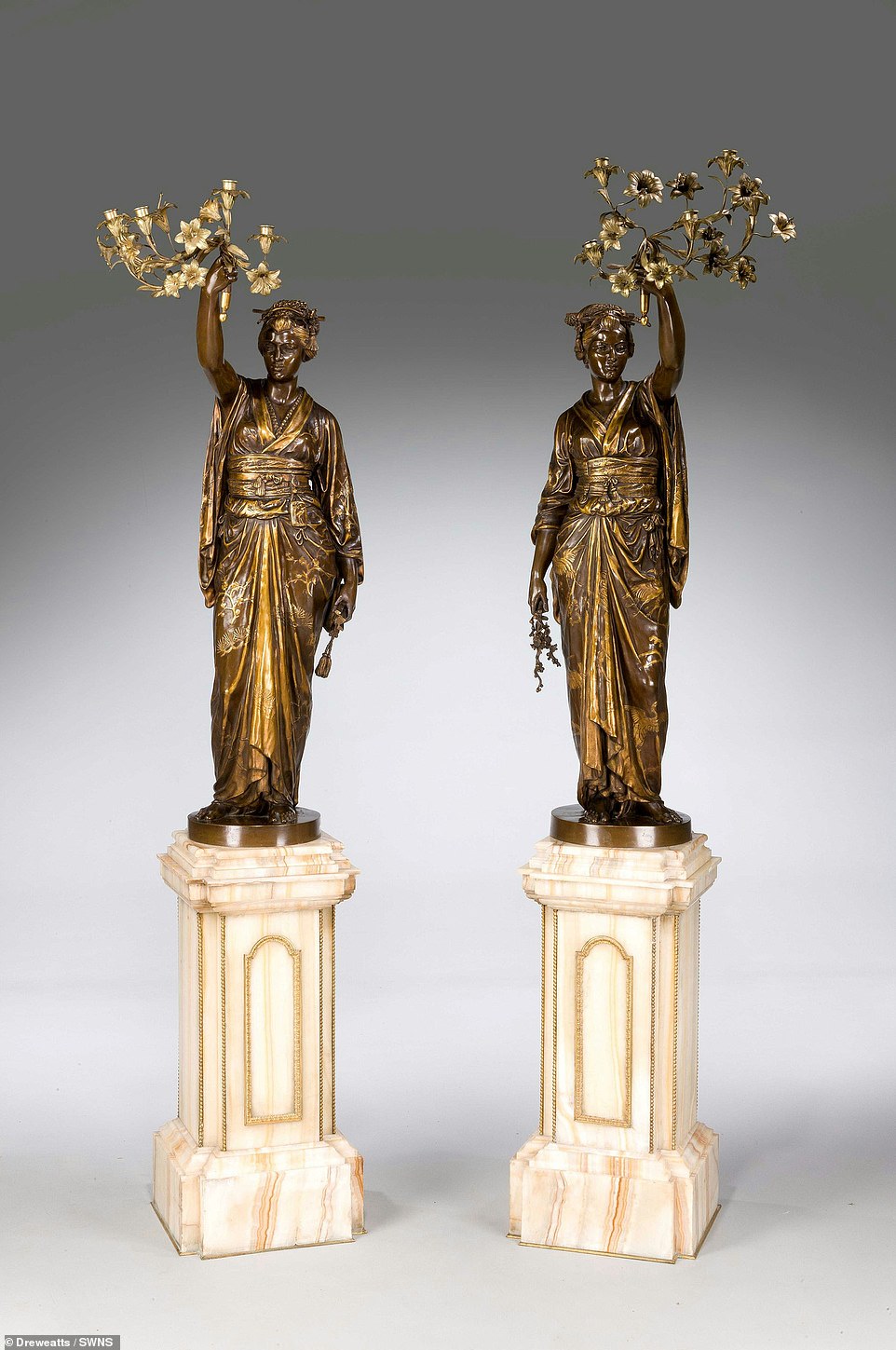 A rare pair of parcel gilt and bronze figural torcheres by Barbedienne and Guillemin, made in France in around 1870, are expected to fetch between  £30,000 and 50,000 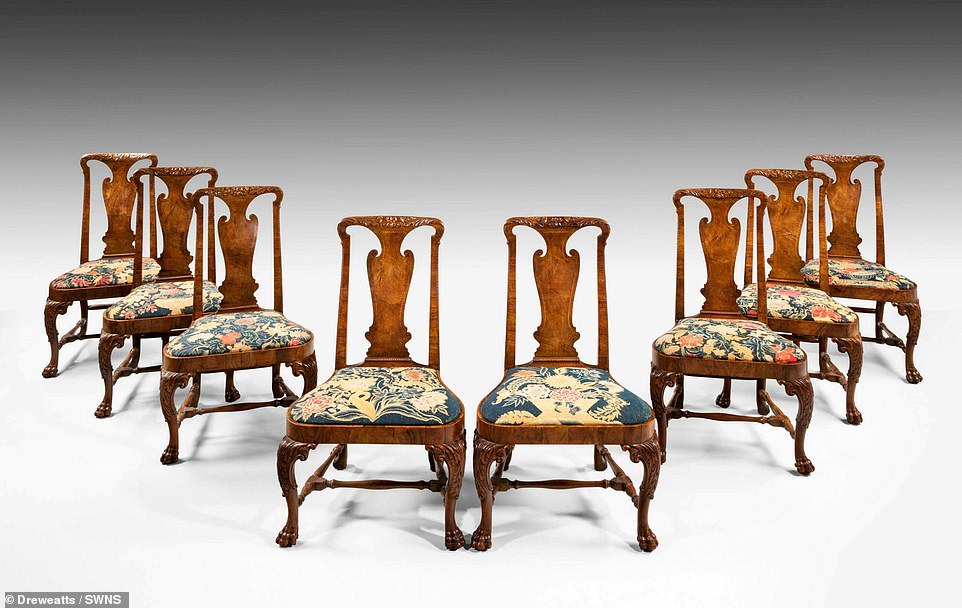 A Dreweatts spokesperson said: ‘The sale will include a curated offering of important and decorative furniture, paintings and works of art including provenances from some of our great houses and historic collections.

‘This atmospheric house, medieval castle and the surrounding gardens will form the dramatic backdrop to the sale, with the full sale view being hosted on the premises, affording collectors and connoisseurs the rare opportunity to see and acquire beautiful and sometimes unusual objects within a wonderfully historic context.’

The sale of its contents includes a George III mahogany serpentine figure which has been given an estimate of between £20,000-30,000. 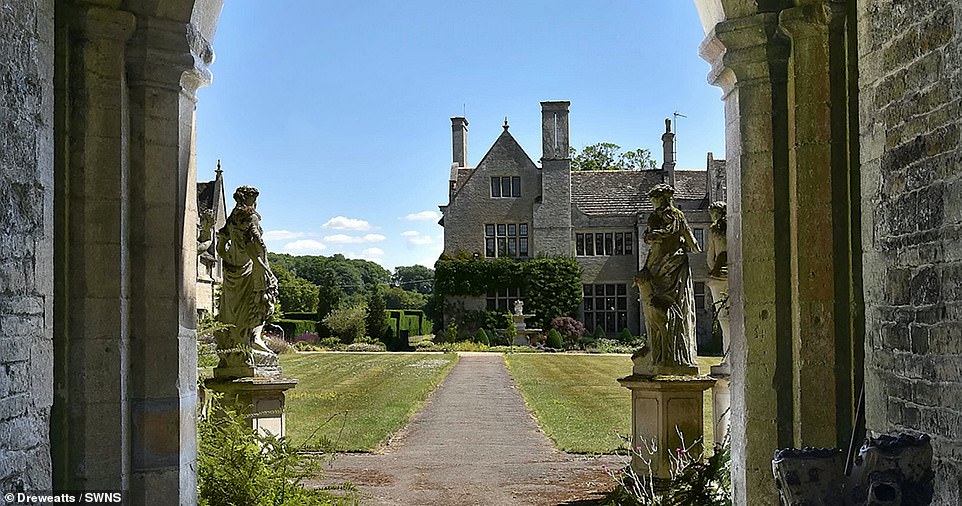 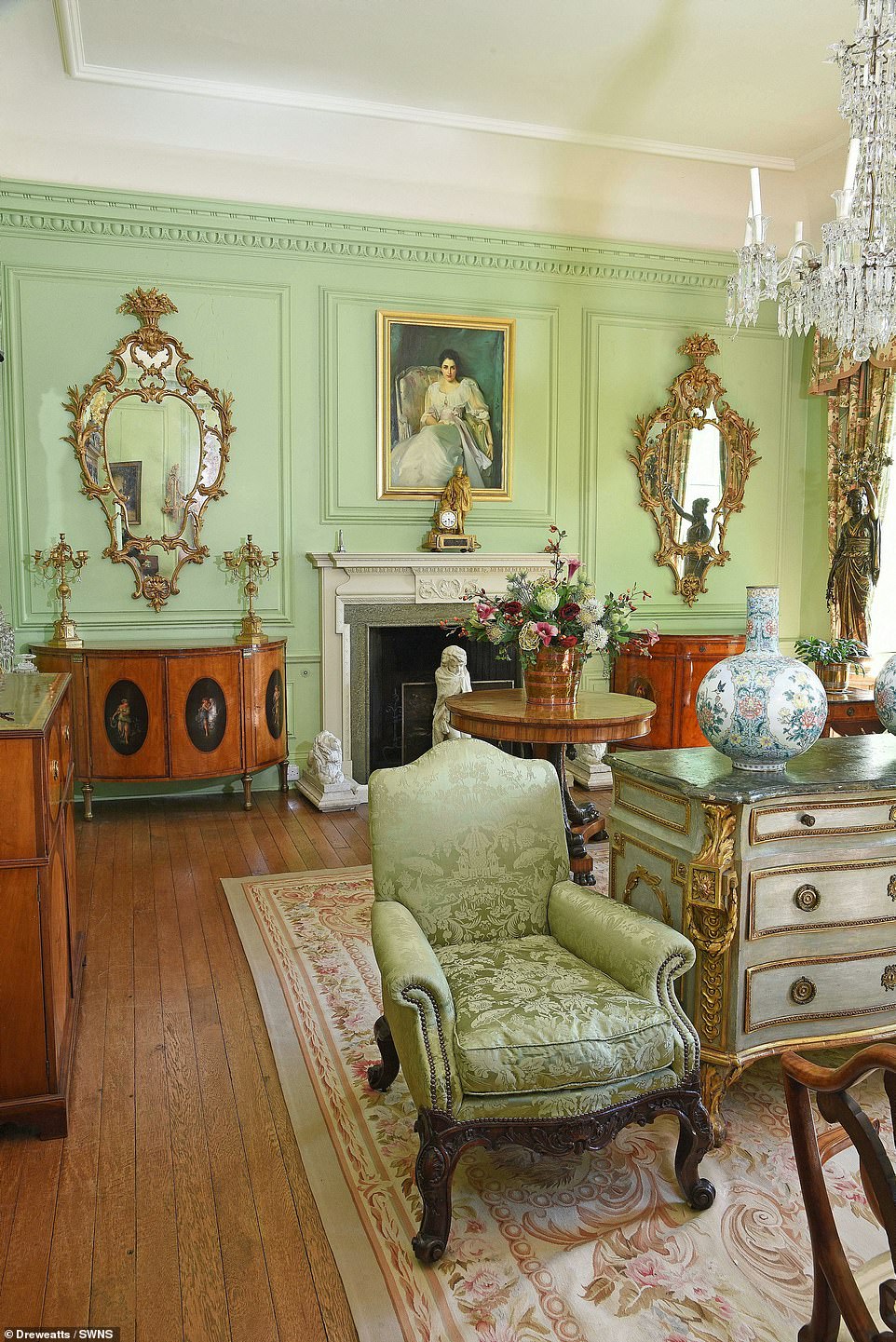 It later became the home of one of Britain’s leading antique dealers, which has occupied the 436-year-old countryside manor house since 1999 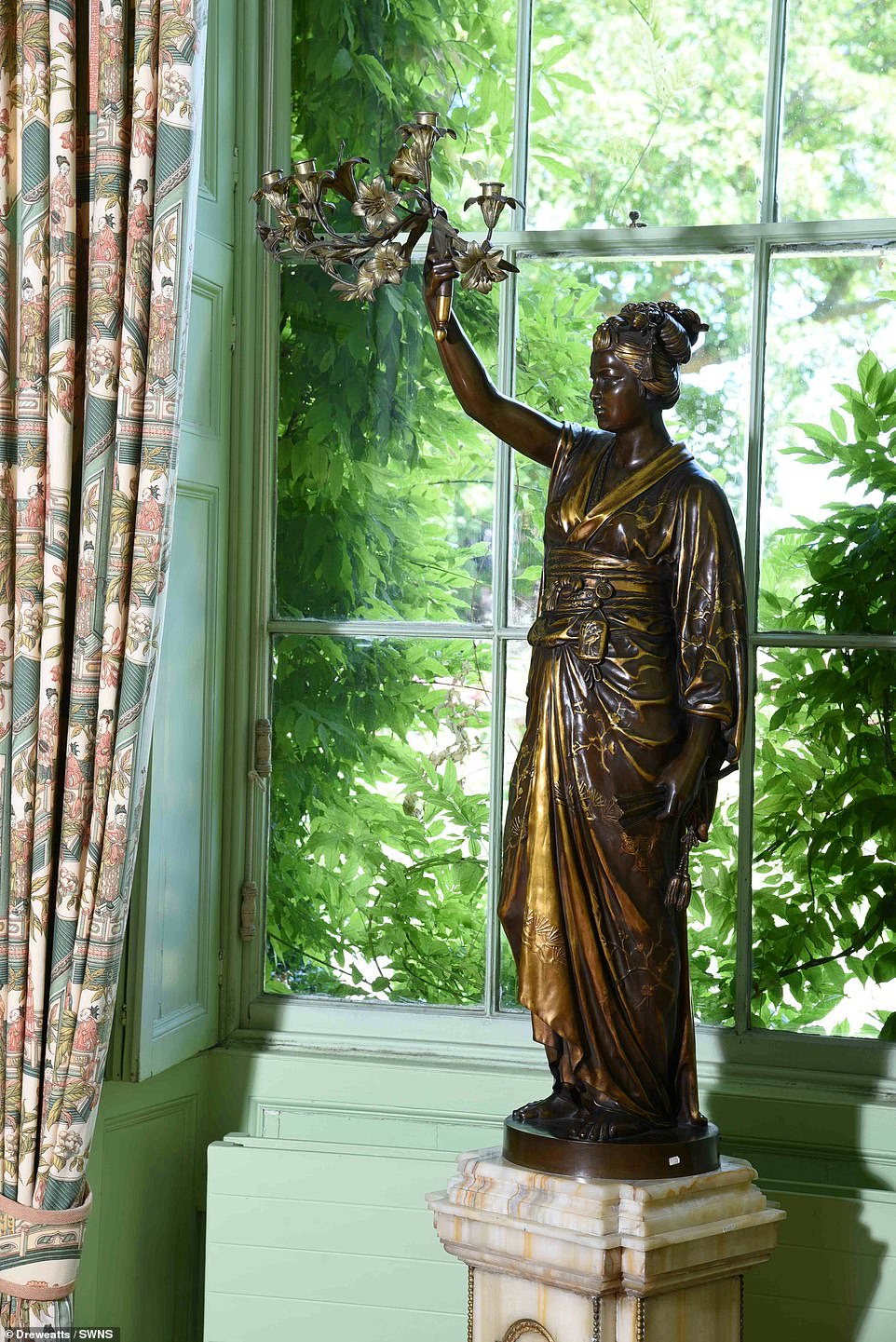 One of the French Barbedienne and Guillemin gilt and bronze torcheres, which are expected to fetch between £30,000 and £50,000 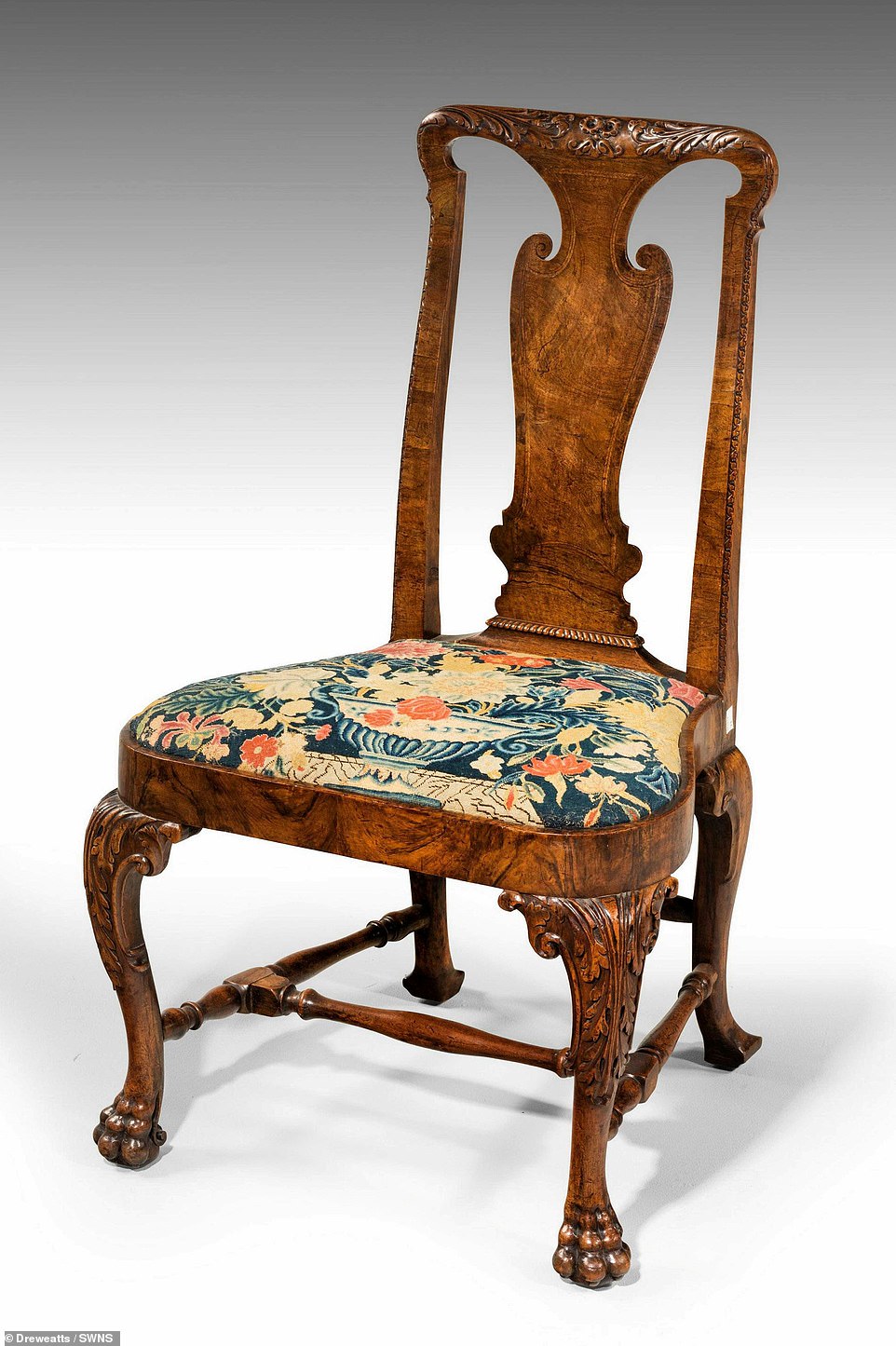 They were once owned by Robert Wood Bliss, an American diplomat, who co-founded the Dumbarton Oaks Research Library in Washington D.C during the Second World War.

Bliss worked at the State Department, during which time he arranged a succession of diplomatic meetings in 1944 known as the ‘Dumbarton Oaks Conference’.

At these meetings delegates collaborated over proposals for the foundation of an organisation to maintain world peace and security.

The culmination of these meetings was the ‘United Nations Charter’ which was adopted in San Francisco in 1945.

Other items include 19th century Italian marble obelisks, French woks of art dating back to the 1800s as well as 17th century Spanish figurines. 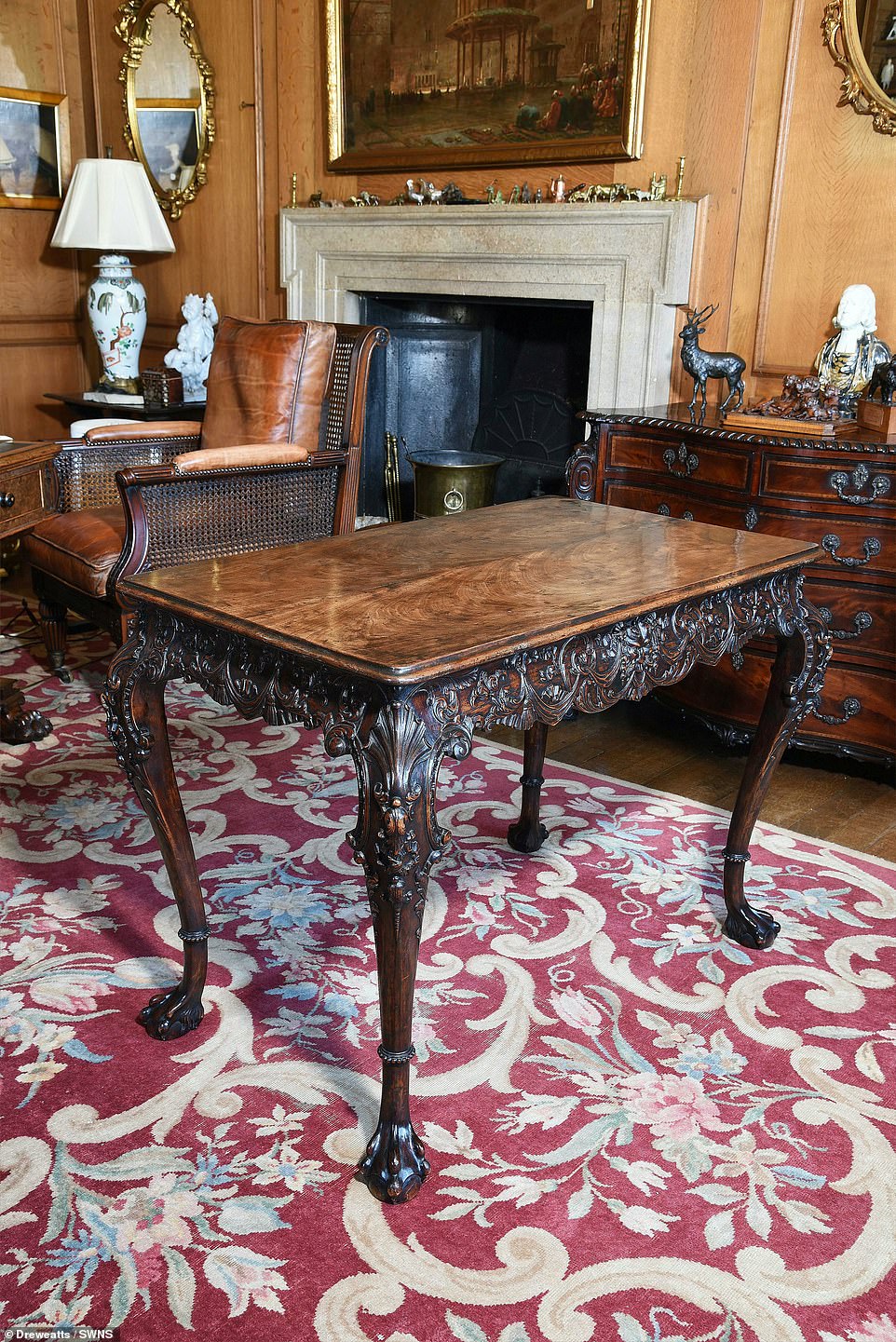 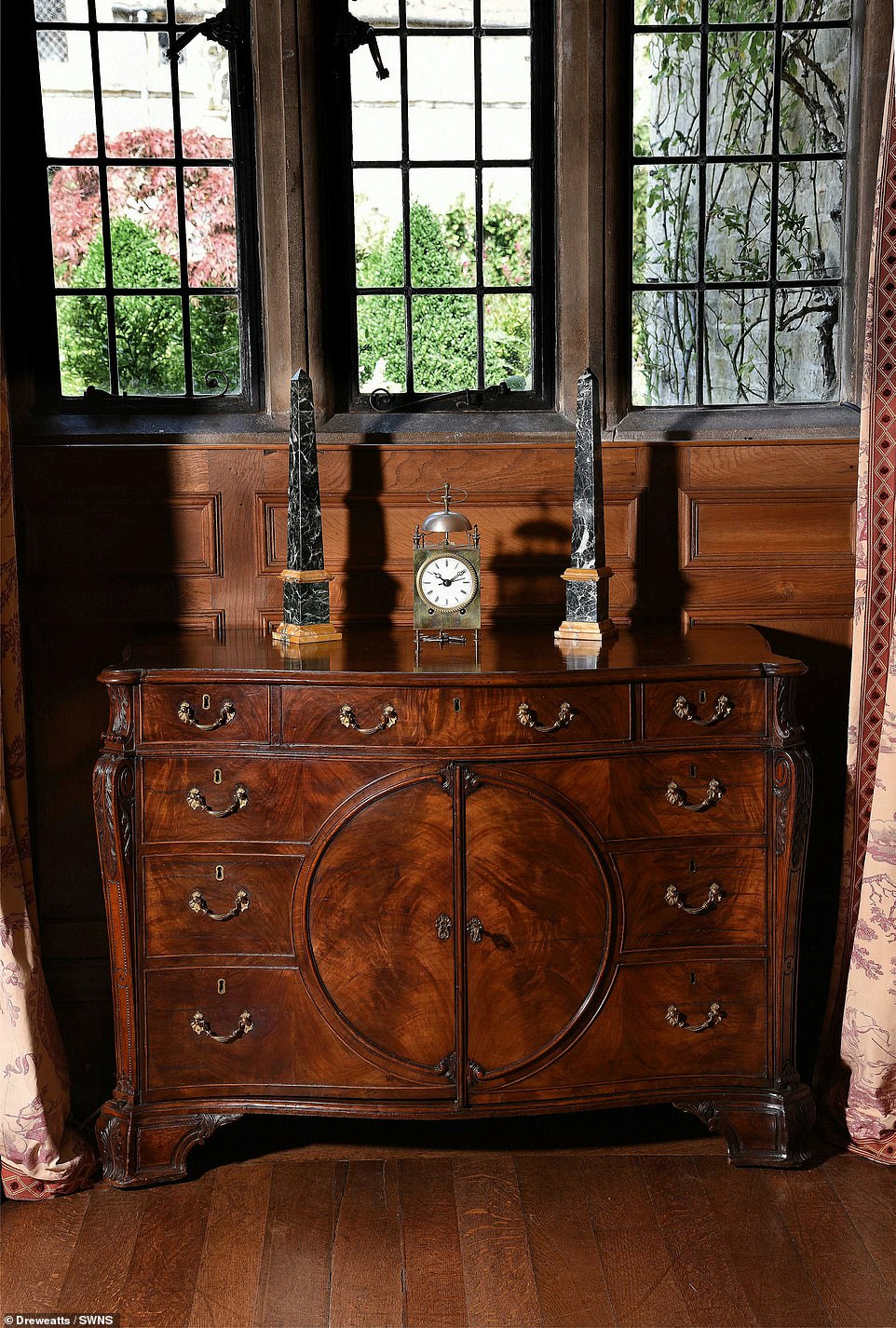 A George III figured mahogany serpentine commode, in the manner of Thomas Chippendale, circa 1770, has an estimated guide price of £20,000 to 30,000 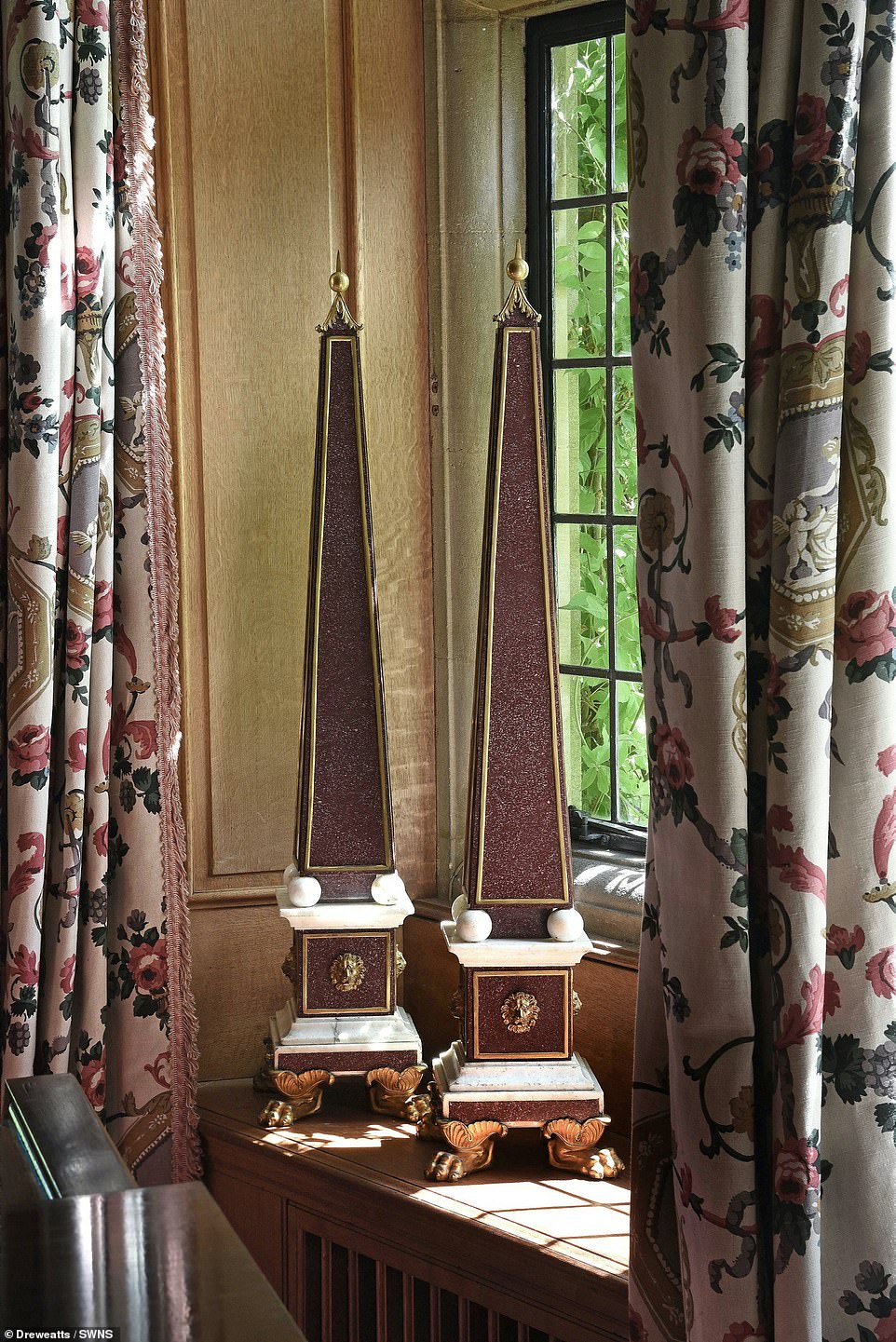 A pair of ormolu mounted red porphyry and white marble obelisks, Italian, 19th century and later mounted in the manner of Valadier, have a guide price of £10,000 to 15,000

Kevin Smith has run Windsor House Antiques for the past 23 years from the venue and has been collecting antiques for more than 60 years.

He now has antique studios all over the world, including in London, Amsterdam, Los Angeles and Hong Kong.

A Dreweatts spokesperson added: ‘What is clear is Kevin’s compulsive and affecting desire to form and collate a collection which is unapologetic in its breadth, depth and evident quality.

‘This insatiable appetite for collecting pieces of quality and historical importance has given rise to a cornucopia of objects, from over 60 years of experience and assiduous collecting.’

Dreweatts head of sale, Ben Brown, said, ‘Having admired the business and its highly curated collection for many years, I am proud for Dreweatts to have been entrusted with the Windsor House Antiques sale.

‘It represents a cross section of the style and quality Kevin has offered for over sixty years and illustrative of a passion and compulsion for beautiful things I am sure many can recognise in themselves.’

Imposter who posed as Brian Laundrie's ex and claimed she was also called Gabby now admits she made it all up.