The Canadian prime minister faces first test after his Liberals lost the majority in October’s election. 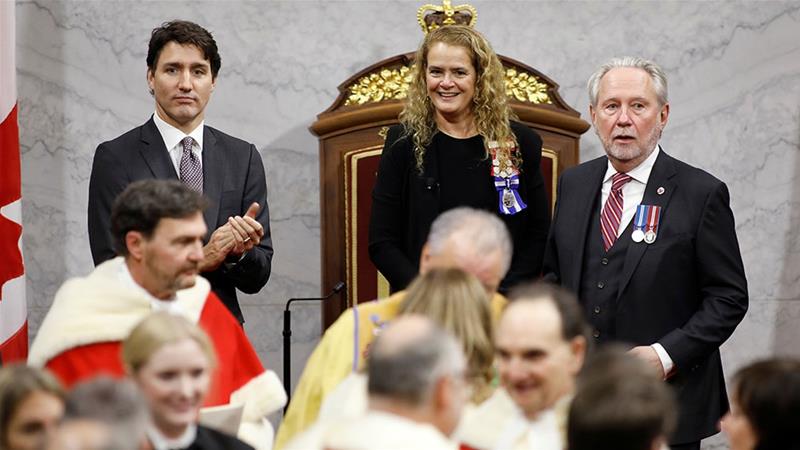 Toronto, Canada – Canadian Prime Minister Justin Trudeau on Thursday called for action on climate change, but it did not explicitly mention oil or pipelines, offending Conservatives.

Trudeau’s Liberals won October’s election, with 156 seats, but lost the majority in Parliament, meaning they must work with at least one opposition party to get legislation.

In his throne speech on Thursday, Trudeau repeated his promise to reduce Canada’s emissions to net-zero by 2050.

“Canada’s children and grandchildren will judge this generation by its action – or inaction – on the defining challenge of the time: climate change,” Canada’s governor general Julie Payette said, reading from the throne speech, which she delivered on behalf of Trudeau. “A clear majority of Canadians voted for ambitious climate action now, and that is what the government will deliver.”

Every new session of Parliament opens with a throne speech that describes the government’s vision for Canada going forward. The governor general read the speech Thursday afternoon while Prime Minister Justin Trudeau sat silently next to her.

To get the opposition’s support, he needed to include policy measures in the throne speech that would make them happy. Canada’s members of Parliament will debate the speech on Friday, and vote to either support or reject it before Trudeau can govern.

The speech did not go far enough for Conservatives, however, who hold 121 seats in Canada’s parliament, and want to see more support for workers in the struggling oil and gas industry.

The word “climate” was mentioned 12 times in the eight-page speech, while “oil” and “pipeline” weren’t mentioned at all. The speech alluded to building pipelines by saying the government would work hard to “get Canadian resources to new markets” and support oil and gas workers who “have faced tough times recently”.

Conservative leader Andrew Scheer said he was “extremely disappointed” by the speech, which he said took no steps to the unite the country. Scheer hinted he might table an amendment to the speech, potentially asking Trudeau to mention oil and pipelines.

Western provinces Alberta and Saskatchewan overwhelmingly voted Conservative, with many seeing Trudeau’s climate change agenda as a threat to their oil and gas industry.

Bloc leader Yves-Francois Blanchet, who won a victorious 32 seats compared with 10 last election, ran a campaign against pipelines. Reacting to the speech in French, he said that while the words “oil” and “pipelines” were not explicitly mentioned in the speech, they still concerned him.

The throne speech committed to taking steps towards a national pharmacare plan that would give Canadians proper drug coverage, something New Democratic Party leader Jagmeet Singh had called for. But reacting to the speech, Singh said it was full of “empty promises and little action”. He said his party would work with the Liberals if they show they are willing to take “real action”.

“As its first act, the government will cut taxes for all but the wealthiest Canadians,” the throne speech promised. It also included an assurance the government would implement the UN Declaration on the Rights of Indigenous Peoples in the first year of the new mandate. And the government said it would make it easier for people struggling with opioid addiction to get the help they need.

“In this 43rd parliament, you will disagree on many things, but you will agree on a great many more,” the speech concluded. “Focus on your shared purpose: making life better for the people you serve.”

Parliament is expected to debate the speech on Friday.

EU leaders to face off in 'very tough' budget summit

Georgia, backed by US and Britain, blames Russia for 'paralysing' cyberattack
Asia