Trump is ‘considering picking Republican Rep. Elise Stefanik as his running mate in 2024’ with Mike Pence set to go against him

Donald Trump and his allies are looking at New York Republican Rep. Elise Stefanik as a potential running mate in the event the former president mounts another re-election bid in 2024, it was reported Wednesday.

It comes amid reports that his former vice president, Mike Pence, could be forging ahead with his own White House bid whether Trump runs or not.

‘She has been talked about in circles close to him as a potential vice presidential,’ Ruddy told CNN.

‘And there’s a feeling among a lot of people on the Republican side that they need to have a woman on the ticket this time.’

Stefanik, who represents the Empire State’s northernmost Congressional district, saw her national GOP profile skyrocket since being elected as a moderate.

In the years after assuming office in 2015 – and replacing Trump critic Rep. Liz Cheney of Wyoming as House Republican Conference Chair, the No. 3 position in the House GOP – she’s also cultivated a close relationship with ex-president.

Now early conversations at Trump’s Mar-a-Lago resort about a potential 2024 ticket are reportedly more often including Stefanik as well.

The ex-president would benefit from choosing a woman as his running mate, particularly one as loyal to him and his views as Stefanik, supporters of the prospective ticket reportedly argue. 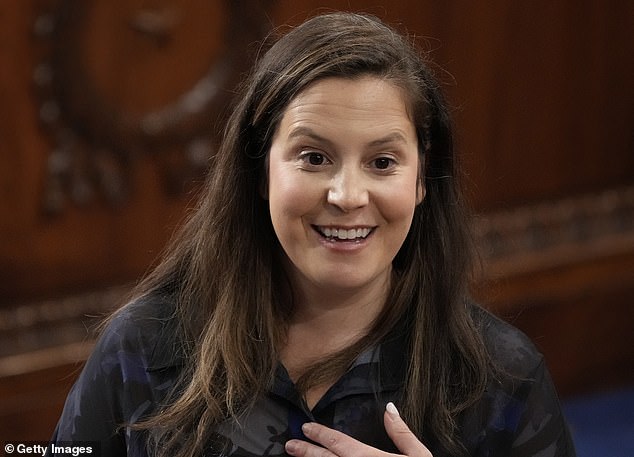 Rep. Elise Stefanik of New York shot to national prominence during Donald Trump’s first impeachment trial as a fierce MAGA loyalist and has since overtaken Trump critic Rep. Liz Cheney for the No. 3 leadership role in the House GOP 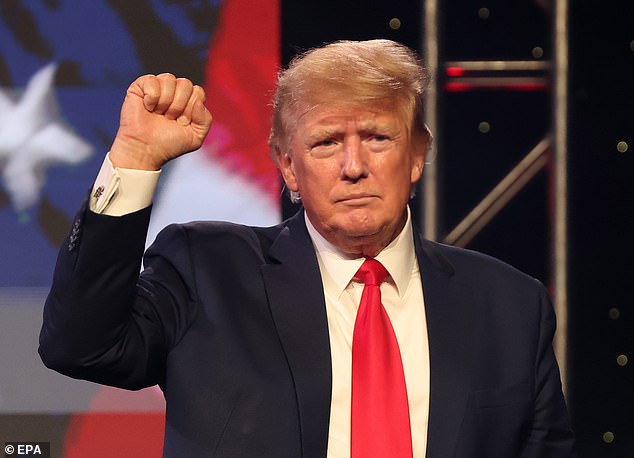 ‘There is a part of Trump who thinks he needs a female VP. He definitely likes her, likely because of how effusive she is to him,’ an adviser told CNN.

Another adviser reportedly indicated that the former president is leaning toward a female running mate either way.

‘I could see Trump convincing himself he needs to pick a female VP to help with his suburban women problem,’ they said.

But while the New York Republican is reportedly eyeing several top committee posts, as well as the No. 2 spot of GOP Whip if her party takes control of Congress in November, her spokesman dismissed any immediate plans for higher office.

‘Congresswoman Stefanik is 100% focused on serving New York’s 21st Congressional District and as House Republican Conference Chair helping lead the efforts to take back the House in 2022 to fire Nancy Pelosi once and for all to save America,’ he is quoted as saying in Wednesday’s report.

Trump is hosting a fundraiser for Stefanik at his Westchester golf course in June, according to the New York Post. 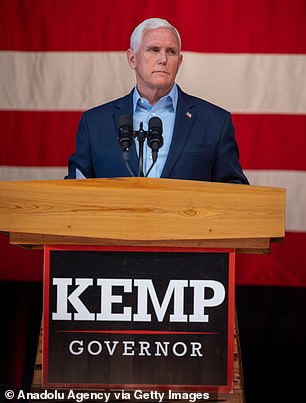 It will be the fourth such event he’s holding for the 37-year-old GOP star.

Stefanik told the Post: ‘I am so proud to join my very good friend, President Trump back in New York to raise millions of dollars to support strong “America First” candidates who are going to fire Nancy Pelosi once and for all this November and save America.’

She first rose to prominence in 2019 during Trump’s first impeachment trial as a fierce defender of his. She also was among the majority of House Republicans to object to certifying President Joe Biden’s 2020 presidential victory.

Trump previously touted Stefanik as a future presidential candidate herself.

‘I want to congratulate Elise on her success. Man is she moving fast. That means at this rate she’ll be President in about 6 years,’ he said at a fundraiser in Florida earlier this year.

‘She’s always been a friend and people would say she’s upwardly mobile. She goes to Washington as a young beautiful woman who took over and all of a sudden she becomes a rocket ship, she’s the boss.’

He added: ‘She’s been a great boss, a strong boss.’

Trump has not formally made a decision about whether he’ll run for president again, but has dropped numerous hint about his leaning toward another campaign.

Similarly, Pence – who Trump tapped as his running mate in 2016 to appeal to religious conservatives in the midwest – is ramping up his own public appearances and even wading into this year’s midterm elections with some high-profile endorsements.

Kemp had been the subject of Trump’s rage since refusing to overturn his state’s 2020 electoral ballots, which amounted to a narrow victory for Biden.

Pence, who rebuffed pressure from Trump to reject certain states’ election results early last year, has called the ex-president ‘wrong’ to push his conspiracy theories but has not hesitated to capitalize on the successes of the ‘Trump-Pence administration’ during his recent spate of appearances in front of GOP audiences.

When asked by the New York Times last month about a possible head-to-head with Trump, Pence did not rule it out.

‘We’ll go where we’re called,’ Pence said of him and his wife. ‘That’s the way Karen and I have always approached these things.’

Meanwhile Trump has eyes on the competition – including Pence. 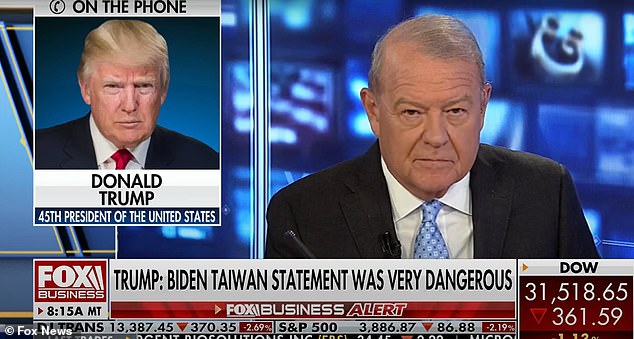 The former president had a contentious interview on Fox Business Tuesday, where he laughed off rumors that Pence may challenge him in 2024

In a statement to DailyMail.com, his spokesman slammed his old deputy as ‘desperate’ and mocked him for trying to ‘chase’ his ‘lost relevance’ amid the former running mates’ latest divide over backing separate candidates in the Peach State’s gubernatorial election.

‘Mike Pence was set to lose a governor’s race in 2016 before he was plucked up and his political career was salvaged,’ Trump spokesman Taylor Budowich told DailyMail.com.

The ex-president laughed when asked about Pence’s possible White House bid in an interview with Fox Business earlier this week.

Chucking slightly, he continued: ‘If he ran I mean, I wouldn’t be concerned with that. That’s fine.’

‘People are very disappointed in Mike, and if he ran, I don’t think that would be a problem.’