‘The hoax is finally dead! The collusion delusion is over!’ Trump blasts the Mueller probe ‘fraud,’ claims the inquest was ‘ridiculous bulls**t,’ declares he has been ‘totally exonerated’ and demands ‘accountability’ from Democrats and the media

Donald Trump said Thursday night that there should be ‘accountability’ for Democrats and members of the media who promoted the now dismissed idea that his 2016 campaign colluded with Russia to tilt the presidential election.

‘Their fraud has been exposed,’ he told a screaming crowd of more than 12,500 in Grand Rapids, Michigan, saying that ‘they’ve now got big problems.’

Trump railed against ‘this phony, corrupt, disgusting cloud’ of suspicion that hamstrung much of his policy agenda during his first two years in office. Later, he called the ‘partisan’ investigations and other pressure on him as ‘ridiculous bullsh*t.’

And for the first time, a Trump rally crowd chanted their favorite slogan in the plural on Thursday, yelling ‘Lock them up!’

‘Little pencil-neck Adam Schiff!’ he jabbed. ‘Got the smallest, thinnest neck I’ve ever seen. He’s not a long-ball hitter.’

Trump aped Schiff’s insistence, even after Mueller’s probe exonerated the president, that there is evidence suggesting campaign collusion wit the Kremlin. 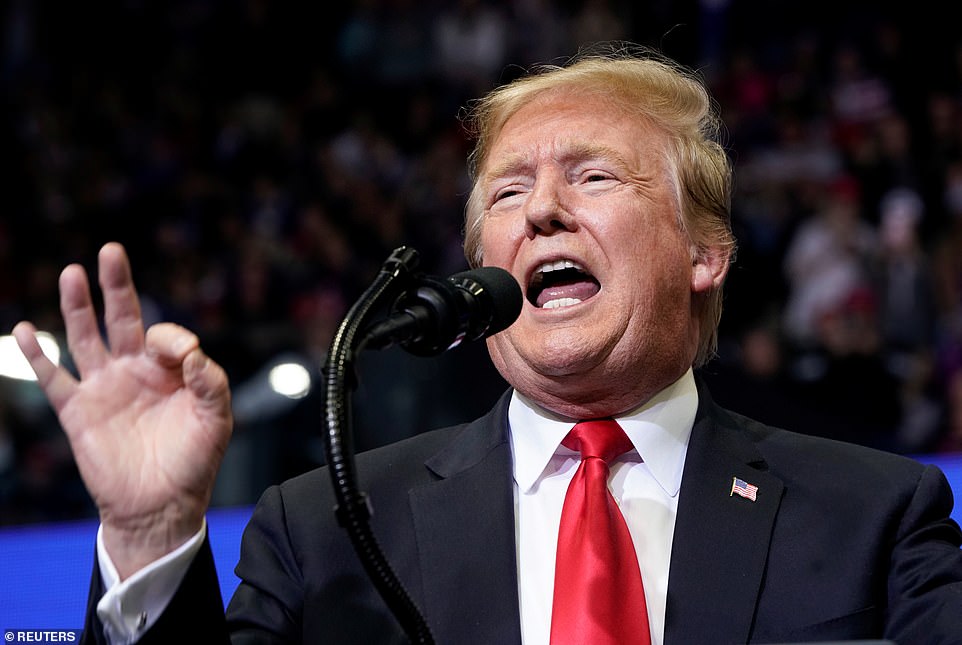 Donald Trump is declaring his victory after his name was cleared by the Mueller investigation in his first campaign rally since the report’s release on Thursday evening in Grand Rapids, Michigan 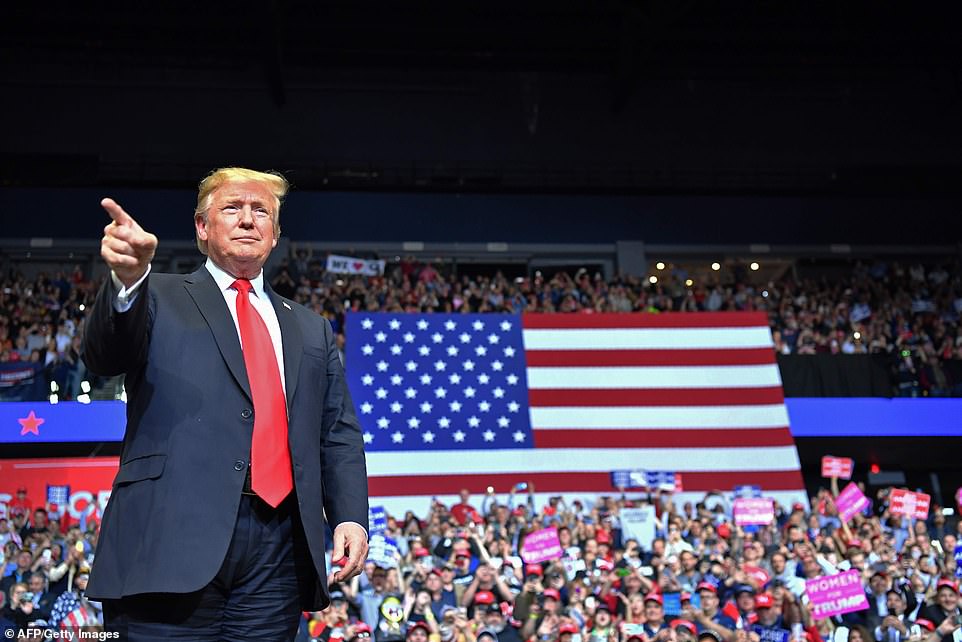 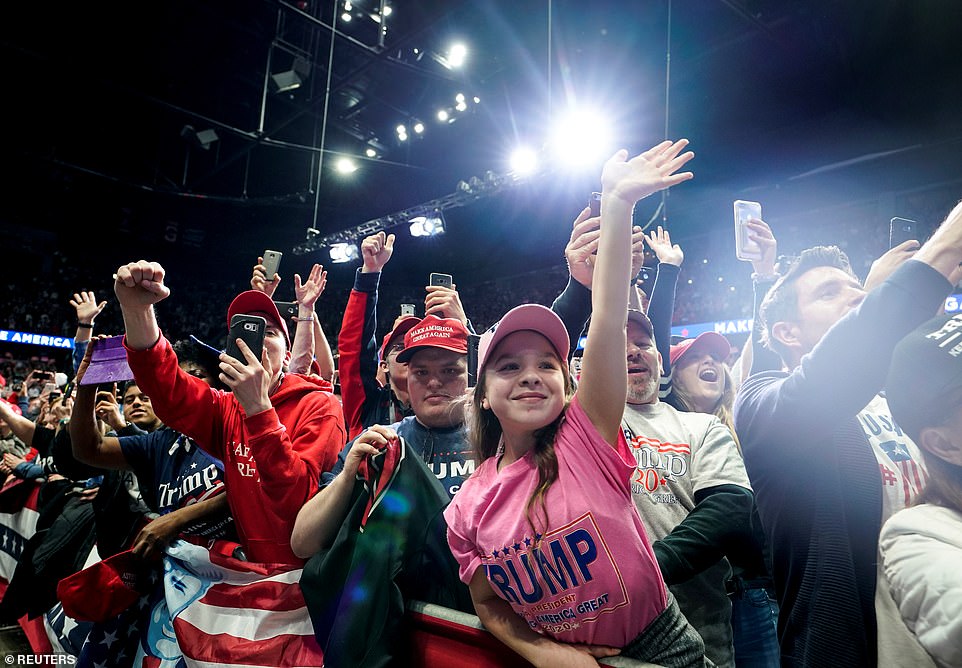 He spoke before a crowd of more than 11,000 at the Van Andel Arena in Grand Rapids, Michigan on Thursday evening 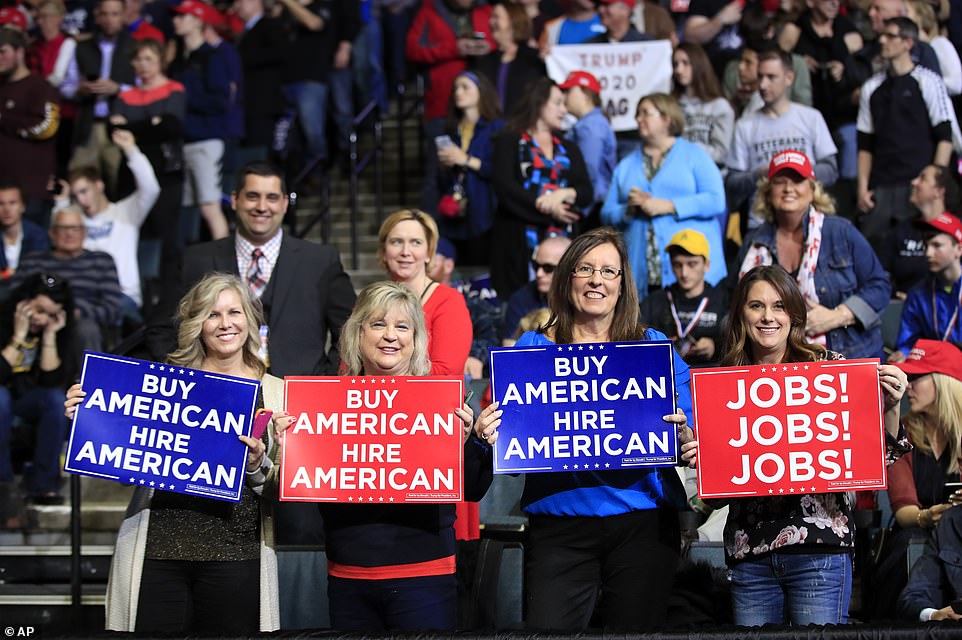 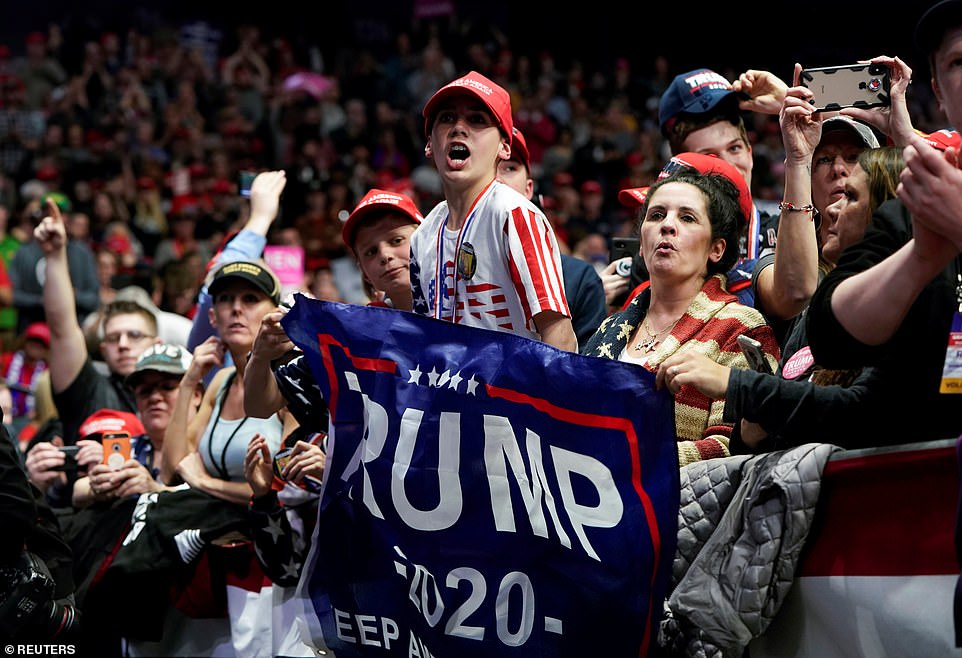 ‘Uh, we don’t really know, there might have been,’ Trump mimed.

‘There has to be some accountability because it’s all lies and they know it’s lies,’ he said.

‘The Democrats have to decide whether or not to continue defrauding the public with ridiculous bulls**t,’ he said.

Trump’s eldest son Don Jr. warmed up the crowd by deriding Schiff’s ‘bullschiff,’ and claiming he ‘really schiffed the bed.’

The president cited ‘all of the Democrat politicians, the media bosses – bad people – the crooked journalists, the totally dishonest TV pundits,’ as boos rained down from the packed rafters of the Van Andel Arena.

‘They know it’s not true! They just got great ratings!’

‘By the way,’ Trump grinned, ‘their ratings dropped through the floor last night.’