Donald Trump has made the dubious claim that the noise from industrial wind turbines causes cancer.

‘If you have a windmill anywhere near your house, congratulations your house just went down 75% in value,’ Trump continued.

‘And they say the noise causes cancer, you tell me,’ Trump said, gyrating his arm in the air and imitating a winding noise. 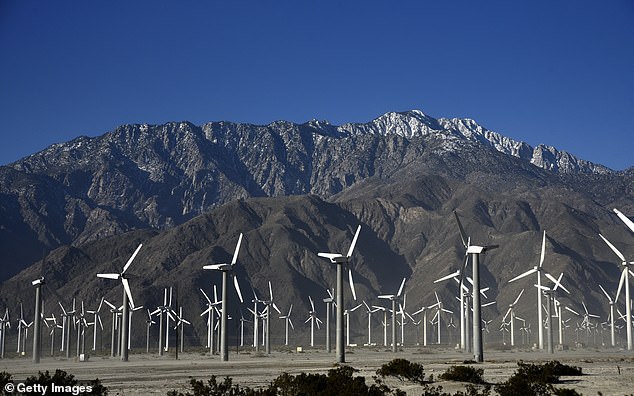 Trump on Tuesday made the dubious claim that the noise from industrial wind turbines causes cancer. Wind turbines are seen above in Palm Springs, California last month

Studies have been mixed when it comes to the impact of wind farms on real estate values, with some finding a negative impact on home prices of up to 40 per cent, and others finding little or no impact.

There are no studies linking the noise of industrial wind turbines to cancer.

There are however literature describing negative health impacts from windmills, particularly from noise.

‘Exposure to wind turbines does seem to increase the risk of annoyance and self-reported sleep disturbance,’ a 2014 review of the literature for PloS One indicated.

Trump’s exaggeration of the health risks from windmills drew opprobrium from his critics online.

‘Yeah I hear the windmill blows the Cancer into you…’ one Twitter user wrote.

‘President Genius has a long history fighting to protect people from windmill noise cancer. Just ask the folks that live near his golf course in Scotland,’ another jeered, referring to Trump’s longstanding opposition to wind turbines off the coast of his Scotland property. 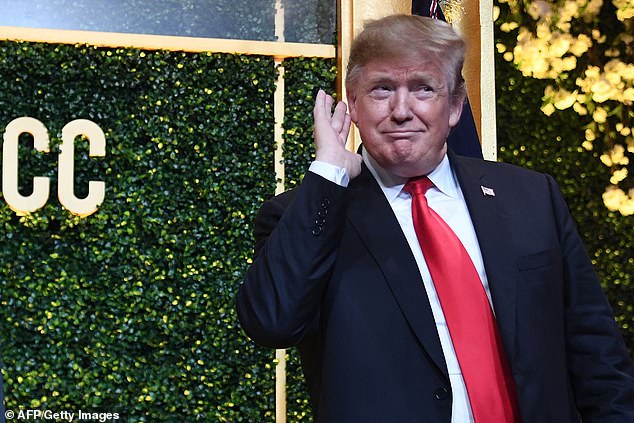 ‘And they say the noise causes cancer, you tell me,’ Trump said at the dinner on Tuesday 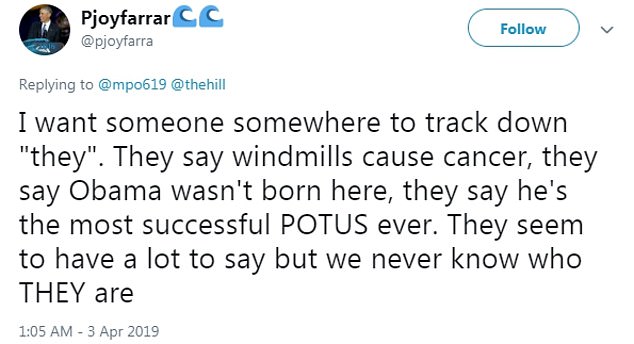 Another questioned the sourcing of Trump’s information.

‘I want someone somewhere to track down ‘they’. They say windmills cause cancer, they say Obama wasn’t born here, they say he’s the most successful POTUS ever. They seem to have a lot to say but we never know who THEY are,’ he wrote.

At another point in his roughly 80-minute remarks, Trump also revisited his odd pet peeve with the Electromagnetic Aircraft Launch System, or EMALS, which is replacing steam-driven catapults on Ford-class aircraft carriers.

Trump has griped about the subject repeatedly in the past, voicing his preference for ‘reliable’ steam.

At the NRCC dinner, he told a story about talking to a sailor who advised him that the steam catapults could be fixed with a ‘wrench,’ whereas the electromagnetic version takes an ‘Albert Einstein.’

In November, Trump raised the subject during a Thanksgiving Day call with a naval officer serving overseas, telling him: ‘Steam is very reliable. Electromagnetic – unfortunately you have to be Albert Einstein to really work it properly.’

The naval officer responded: ‘Yes sir. You sort of have to be Albert Einstein to run the nuclear power plant that we have here as well, but we’re doing that very well.’

Alicante is hit by meteotsunami flooding streets and beaches

Naga Munchetty 'could face ban on reporting about NatWest'

Covid could be spread through FARTING, ministers claim