Washington: President Donald Trump is likely to announce on Thursday (local time) plans for a summit with Chinese President Xi Jinping intended to mark an end to the two nations' year-long trade conflict.

"There is indeed a lot of progress being made and indications there could be a summit meeting in the near future," said Myron Brilliant, executive vice president of the US Chamber of Commerce. "Both sides are working hard to wrap up the talks as soon as possible." 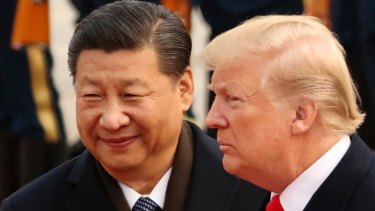 US President Donald Trump and Chinese President Xi Jinping have been engaged in a trade war after the US imposed sweeping tariffs. Credit:AP

China is pushing for the tariffs to be removed before it will agree to lift its retaliatory tariffs on US farm products and industrial goods including autos.

Also unclear is whether China will agree to the administration's demand for an enforcement mechanism allowing the US to re-impose tariffs if it believes China is not fulfilling its obligations.

Though Trump has been pushing for the Chinese leader to travel to the US to sign a trade deal, the Chinese leader is unlikely to do so unless the agreement is 100 per cent complete. If the two leaders decide to haggle in person over any final details, a third-country venue is more likely.