Home » World News » Trump’s lawyers had three hurdles to leap. They cleared them all

Firstly, to improve on their shambolic and widely mocked performance on the trial’s opening day.

Secondly, to present a defence of Trump that would please both their client and his supporters watching at home on television.

And thirdly, to ensure that at least 34 of the 50 Republicans in the US Senate feel comfortable voting to acquit Trump on the charge of inciting the January 6 riot at the Capitol.

They likely succeeded on all three counts. 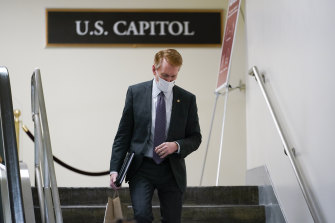 Republican Senator James Lankford, walks down the steps on Capitol Hill after the fourth day of the second impeachment trial of former president Donald Trump. Credit:AP

The Trump legal team’s defence was far from exhaustive: after being given 16 hours to make their case they spoke for just three. Their presentation included easily disproven inaccuracies – such as the false claim that a leader of far-left protest movement Antifa was arrested for participating in the riot.

Their case was heavy on “whataboutism” and false equivalence: Trump’s lawyers played a 10-minute video montage of Democrats using the word “fight” to suggest that Trump was engaging in standard political rhetoric when he urged his supporters to “fight like hell” against the election outcome.

Left unsaid was the obvious difference: the Democrats’ statements were not followed by an assault on the Capitol that left five people dead.

But Trump’s lawyers were not aiming for legal brilliance or to persuade neutral adjudicators to their point of view. For all its legalistic styling, impeachment is an inherently political process and this was a political presentation targeted at a conservative audience.

The lengthy videos accusing prominent Democrats and celebrities such as Madonna of hypocrisy may have had little relevance to the case at hand. But they made for ideal Fox News fodder (the lawyers’ video montages had the feel of a Sean Hannity opening monologue). And they would have resonated with many Republican senators, who feel their Democratic colleagues are given an easy ride by the mainstream media. 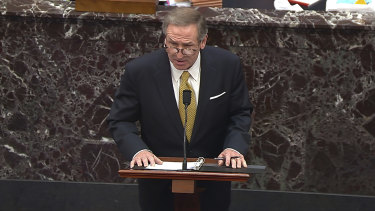 In their arguments, the Democratic impeachment managers asserted that Trump didn’t just behave with reckless negligence in the lead-up to the riot. They accused him of going further by saying that his supporters stormed the Capitol at his direction and claimed that the rioters were following his “marching orders”.

This created an opportunity for Trump’s lawyers to respond, accurately, that he had not made an explicit call for his supporters to behave violently. Rather than his months-long claim to overturn the election, Trump’s legal team narrowly focused on his speech to supporters on January 6 – emphasising a line in which he urged supporters to march “peacefully and patriotically” to the Capitol.

Republican Senator Ron Johnson may have been overblown in suggesting that Trump’s team “legally eviscerated” the Democrats. But Lisa Murkowski, a moderate Republican senator who may vote to convict Trump, praised his lawyers for putting on a “much stronger presentation” than on the first day of the trial.

In one sense, Trump’s lawyers had an extremely difficult task given they only had a week to prepare for the trial and the fact their client had behaved so badly in the lead-up to the assault on the Capitol.

In another sense, they had the upper hand given the extremely high bar required to secure a conviction: a two-thirds majority in the Senate, meaning 17 Republicans would need to find Trump guilty.

Earlier in the week, all but six Republican senators voted that the trial itself was unconstitutional because Trump was no longer in office.

Trump’s lawyers needed only to lock in this advantage by keeping most Republican senators in the “not guilty” column. They did what they needed to do.

What in the World

A note direct from our foreign correspondents about what’s making headlines around the world. Sign up for our weekly newsletter here.

It’s on: Colorado ballots are headed to voters’ mailboxes