Is she taking the PIZZA? Liz Truss takes Easter recess chillaxing to the max with a breakfast of leftover takeaway (but is it a cheeky reference to her fellow ‘pizza club plotters’ who want to oust May?)

Theresa May urged MPs to use the Easter recess as a relaxing time for reflection as the Brexit crisis continues.

But quirky senior minister Liz Truss might have taken the request to chillax a little too far today – by revealing her breakfast was a slice of cold leftover pizza.

In what might be a cheeky nod to her fellow Brexiteers in Government – dubbed The Pizza Club for their plotting over food – the Chief Secretary to the Treasury posted a picture of the popular Italian dinner staple to her 54,000 Twitter followers.

Ms Truss, 43, who is known for her fun-loving approach to social media, paired the slice of pizza with a slightly more classy accompaniment in the shape of an espresso coffee in a glass for the full Mediterranean experience.

With the picture she wrote: ‘Starting recess as I mean to go on. #coldpizza #evenbetter.’

It came on the first day of the 11-day Easter recess, where MPs are able to take holiday or return to their constituencies to work. 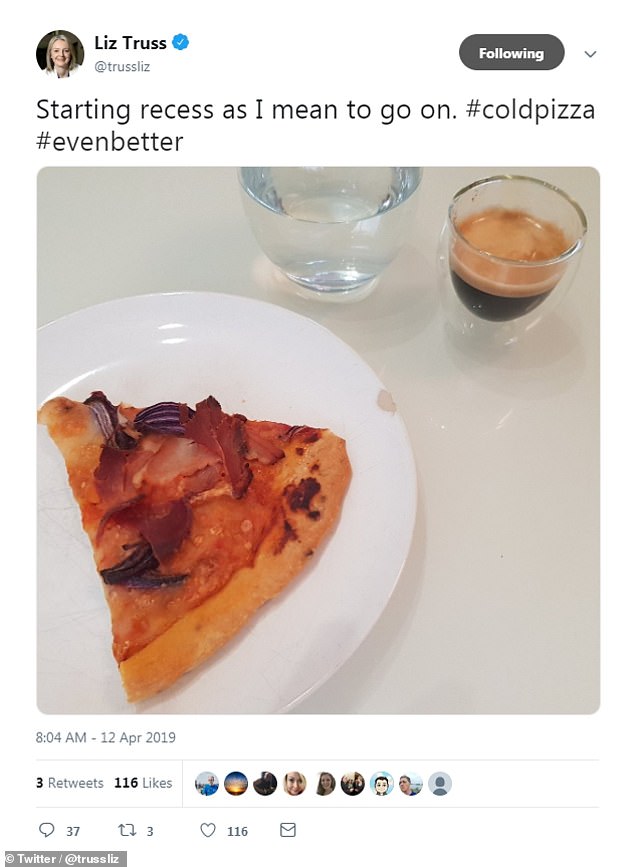 Ms Truss posted a picture of her unusual continental breakfast to her 54,000 Twitter followers this morning

Mrs May yesterday told the Commons: ‘I’m sure everybody across the whole of this house is looking forward to the opportunity to actually take some time to reflect on the issues that we are dealing with in this house, to do this away from this chamber.’

Last October around a third of the Cabinet held private talks over takeaway pizza amid growing concerns about Theresa May’s Brexit strategy.

The gathering was a clear show of strength by ministers as Mrs May came under massive pressure from the EU to make concessions.

Four senior figures including Mrs Leadsom were thought to be ready to resign at the time.

But their plotting seemed to fizzle out, with all but Mr Raab remaining in their ministerial posts. 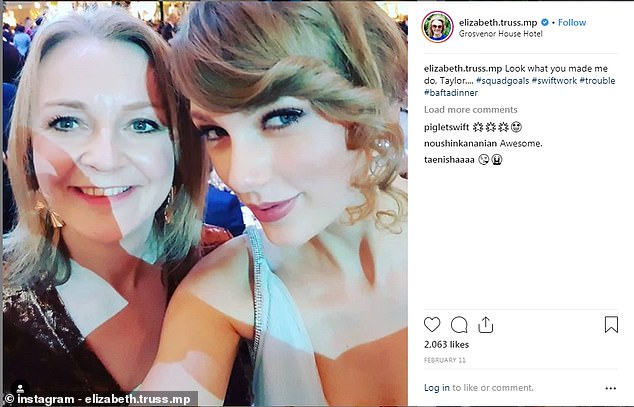 Ms Truss shared a Taylor Swift selfie with her 6,5000 Instagram followers in February after attending the Baftas 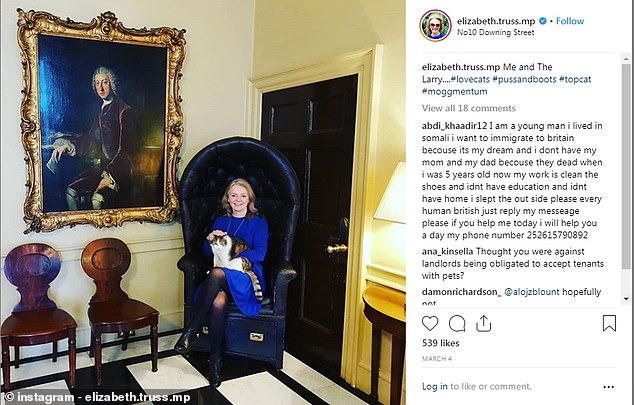 The next month she posted a picture inside 10 Downing Street with the resident cat, Larry

They ordered woodfired pizzas from Oregano, including Mozzerella, hot and spicy, and vegetarian.

Sources claimed the event was ‘social’ and there is no sinister plot to unseat Mrs May.

It is not the first time South West Norfolk MP Ms Truss – thought to be keen on an outside tilt at replacing Theresa May – has used social media to highlight her lighthearted.

She has previously used her Instagram to share a selfie with Taylor Swift from the Baftas and a picture taken inside 10 Downing Street with the resident cat, Larry.