One killed and five injured as protests against government austerity measures spread across Tunisia. 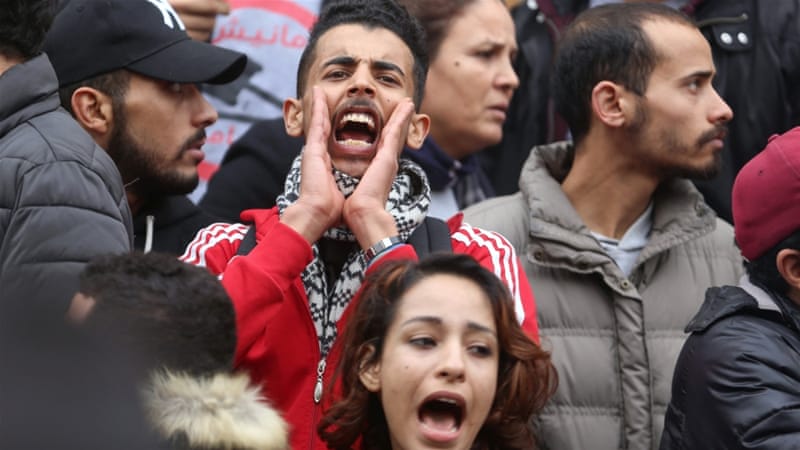 Tunisia’s main opposition party has called for continued protests against “unjust” government austerity measures, a day after widespread demonstrations left one person dead and several others injured, according to reports.

Protests took place in a number of towns across Tunisia on Monday following the government’s decision to raise taxes under its 2018 Finance Act.

The budget, which took effect on January 1, hiked fuel prices and introduced new tax measures related to the purchase of housing.

Hamma Hammami, leader of the opposition Popular Front party, told reporters that multiple opposition groups would meet on Tuesday to “coordinate our movements”.

“We will stay on the street and we will increase the pace of the protests until the unjust financial law is dropped,” he said, according to Reuters news agency.

Imen Mhamdi, a 27-year-old university graduate who is employed as a factory worker, joined protests in the coastal city of Sousse this week.

“This government, like every government after [Zine El Abidine] Ben Ali, only gives promises and has done nothing,” she said, referring to longtime Tunisian leader who was forced to step down after the country’s 2011 revolution.

“People are angry and poverty is rising.”

Mhamdi told Al Jazeera in a telephone interview on Tuesday that many Tunisian youth have lost faith in political parties.

The protest movement began spontaneously, she said, after a few people tagged the phrase #Fech_Nestannew [What are we waiting for?] on walls across the city at night.

The slogan is being used on social media to highlight the protests.

“I’m not feeling a lot of hope, but we are saying no [to austerity],” said Mhamdi. “We have to push this government to do something.”

“People have to understand that the situation is extraordinary and their country is having difficulties, but we believe that 2018 will be the last difficult year for the Tunisians,” he told reporters on Tuesday, adding that while demonstrations are acceptable, violence is not.

Tunisia’s current government reached an agreement late last year with the International Monetary Fund for a four-year loan programme, worth about $2.8bn, in return for economic reforms.

The country’s trade deficit reached a record $5.8bn in the first 11 months of 2017, while its currency – the dinar – weakened to more than three units per euro for the first time ever on Monday, Reuters reported.

Mouna Ali, a university student in Sousse, told Al Jazeera the austerity measures “constitute a catastrophe for the middle class”.

“The Tunisian government needs to understand that Tunisian society is fed up. It is suffocating in misery, in poverty, in unemployment,” the 28-year-old said.

A 55-year-old man died following a protest over the state of the economy in Tebourba, 40km west of the capital, Tunis, on Monday, state media reported.

Five others were injured during the demonstration, according to a report by Tunis Afrique Presse (TAP) on Tuesday.

The Tunisian Ministry of Interior confirmed in a statement on Monday evening that a 55-year-old man had died in a local hospital after being admitted with symptoms of dizziness.

He suffered from “chronic shortness of breath” and showed “no signs of violence or [having been] run over”, and a forensic doctor has been tasked with determining the cause of death, the statement said.

Speculation on social media throughout Monday evening suggested that the man had died after being hit by a security forces vehicle, but the ministry refuted this claim, saying it was likely he had suffocated from inhaling tear gas.

In the city of Sidi Bouzid in central Tunisia, protesters took to the streets for the second day in a row on Monday to denounce price increases and call for revisions to the Finance Act, TAP reported, noting that more protests were scheduled in the coming days.

Yassine Rouatbi, an entrepreneur from the small town of Kalaa-Sghira, told Al Jazeera that peaceful protests will continue until the government revises its budget.

The demonstrations should not be entirely surprising, he added, given Tunisia’s recent political history.

“These types of protests are completely normal only a few years after a revolution,” said Rouatbi.

“We are building our Tunisia and we have an obligation to build a better Tunisia.”

Six years since the 2011 uprising that overthrew Ben Ali, the former president, Tunisia has been held up as a model by avoiding the violence that affected other nations after their Arab Spring revolts.

Successive governments, however, have struggled to enact fiscal reforms that have been delayed by political infighting and government wariness of social tensions over jobs and economic conditions that helped spark the 2011 uprising.