Turkish President Recep Tayyip Erdogan has taken a major swipe at the struggling British pound – despite his own economy collapsing. He had time to brually mock the UK, claiming Pound Sterling has “blown up.” – despite Turkish inflation now at an eye-watering 80 percent. Timothy Ash, an emerging markets strategist at BlueBay Asset Management, responded to those comments in an email note.

He wrote: “Oh the irony, Erdogan giving Truss advice on the economy. Turkey has 80 percent inflation and I guess the worst performing currency over the past decade. Lol. How low the UK has sunk.”

Last Friday, UK Chancellor Kwasi Kwarteng used a mini-budget’ to announce a raft of tax cuts aimed at helping millions of Britons through the cost of living crisis.

But the announcements immediately saw the pound tumble, plunging to its lowest-evel level agaionst the UK dollars, leaving financial markets in shock.

The British currency has since regained some of its losses, but there is now intense pressure on Prime Minister Ms Truss and her newly-appointed Chancellor. 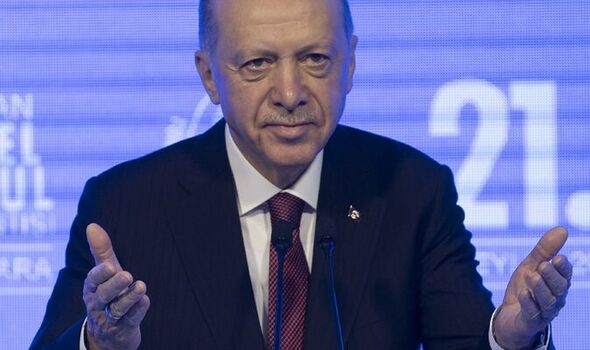 Yesterday, the Bank of England stepped in by launching an emergency government bond-buying programme to prevent borrowing costs from spiralling out of control and stave off a “material risk to UK financial stability”.

But the comments from Mr Erdogan about the pound will leave many dumfounded – especially as Turkey’s own economy shows signs of being on the verge of collapsing.

The Turkish President has said he had advised the central bank to lower its policy rate at its upcoming meetings following an expectation interest rates will come down to single digits by the end of the year.

The country’s central bank cut its policy rate by 200 basis points to 12% in the last two months after inflation had skyrocketed to 80 percent in August.

This is part of Mr Erdogan’s unusual policy of bringing down rates and thus lowering soaring inflation.

Speaking at the general assembly of a merchants’ confederation, he said: “My biggest battle is against interest. My biggest enemy is interest. We lowered the interest rate to 12%. Is that enough? It is not enough. This needs to come down further.”

“We have discussed, are discussing this with our central bank. I suggested the need for this to come down further in upcoming monetary policy committee meetings.”