The former footballer made controversial unproven claims about the virus on several internet platforms, including one that it is linked to the 5G mobile network.

A spokesman for Twitter said the 68-year-old, who had 382,000 followers, had violated its rules regarding the spread of information on Covid-19.

‘The account referenced has been permanently suspended for violating Twitter’s rules regarding Covid misinformation,’ they told the BBC.

In a blog post from July 14, Twitter wrote: ‘We will continue to remove demonstrably false or potentially misleading content that has the highest risk of causing harm.’

The action comes after Facebook and YouTube took similar action in May, saying Icke had posted misleading claims about the pandemic. 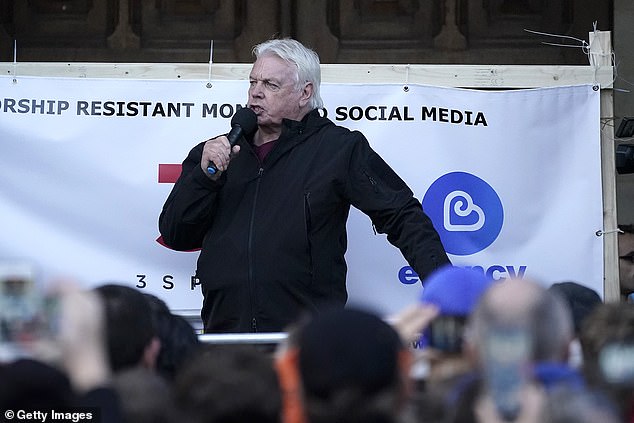 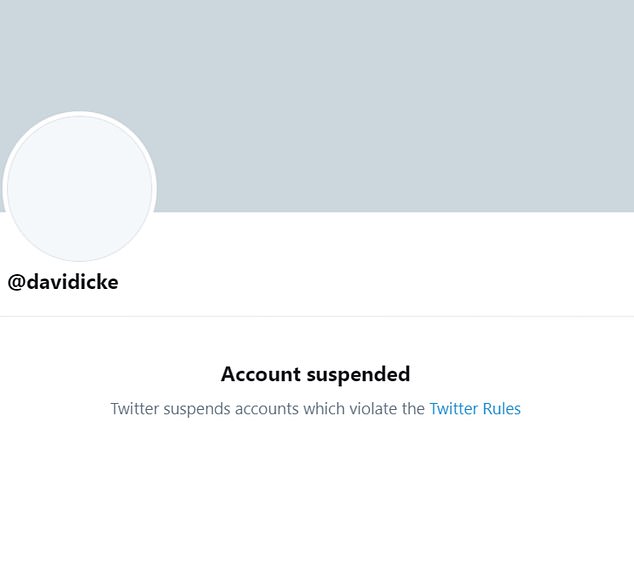 The former footballer made controversial unproven claims about the virus on several internet platforms, including one that it is linked to the 5G mobile network

He also attended a mass anti-lockdown rally in Trafalgar Square in August, organised by Jeremy Corbyn’s brother Piers, and urged police to ‘stop serving the psychopaths’. Meteorologist Corbyn was handed a £10,000 fine.

Famous medics including Dr Christian Jessen and former junior doctor Adam Kay have called on social networks to remove Icke from their platforms.

They are backed by the Centre for Countering Digital Hate (CCDH), who claim his conspiracies over Covid-19 have been viewed more than 30 million times.

The centre said after the latest removal: ‘Twitter had allowed him to continue spreading anti-Semitic hatred and dangerous Covid misinformation for months.’

Mr Icke’s Instagram page, which has 212,000 followers, is still active and posted a video on the weekend of him telling a large crowd in Birmingham to ‘choose freedom’. The video has been viewed more than 85,000 times.

Icke has promoted fringe theories since the 1990s, but his recent return to prominence was propelled by the spread of Covid-19.

He discussed the pandemic in an interview on TV station London Live, which led media watchdog Ofcom to rule the channel’s owner had broken broadcasting rules because the segment had failed to challenge his ‘unsubstantiated views’.

Though Twitter’s rules do not include a general ban on misinformation, in July it said it would not allow any tweets about Covid-19 that were ‘claims of fact, demonstrably false or misleading, and likely to cause harm’.

Her account was taken offline on Thursday, with Twitter providing the same brief explanation for its removal.

Fears Alana Cutland’s body may never be found after Cambridge student, 19, jumped from plane into Madagascar savannah filled with fossa felines – The Sun