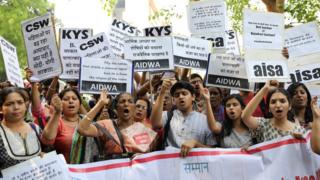 A 13-year-old girl has been raped and murdered in India.

Her body was found in a sugarcane field in northern Uttar Pradesh state, police said on Saturday. Two neighbours in the village have been arrested.

Police have denied the father’s account that his daughter had had her eyes gouged out and her tongue cut.

Rape and sexual violence have been under the spotlight in India since the 2012 gang rape and murder of a young woman on a bus in the capital, Delhi.

That attack led to huge protests and changes to the country’s rape laws, but there has been no sign of crimes against women and girls abating.

According to recent crime figures, every fourth rape victim in India is a child. In an overwhelming number of rape cases, the victims know the perpetrators.

The family went searching for their daughter after she failed to return from a toilet break out in the fields.

They say they found her body mutilated.

But police said the post-mortem examination had concluded that she had died from strangulation after being raped – but not that her eyes had been gouged out or that her tongue had been cut.

“There were scratches near the eyes, likely due to the sharp sugarcane leaves where the body was found,” police spokesman Satendra Kumar said.

A senior member of the Opposition Congress Party, Jitin Prasada, condemned the attack as “saddening”.

“The inhuman act with a girl has put humanity to shame,” he said, according to the Times of India newspaper.

The incident comes months after the case of a six-year-old girl who was abducted outside her home in Madhya Pradesh state and raped.

The attacker inflicted severe injuries to the child’s eyes, in an apparent attempt to stop her identifying him.

In February, a 25-year-old man was arrested for allegedly raping a five-year-old girl on the premises of the US embassy in Delhi.

In November last year, the gang rape and murder of a 27-year-old vet in the southern city of Hyderabad also made global headlines and triggered protests.

One in five men have no friends as loneliness epidemic