THE UK has experienced its deadliest day during the pandemic – as a staggering 1,610 deaths were reported in the last 24 hours.

There have also been 33,355 new coronavirus infections recorded in the last day. 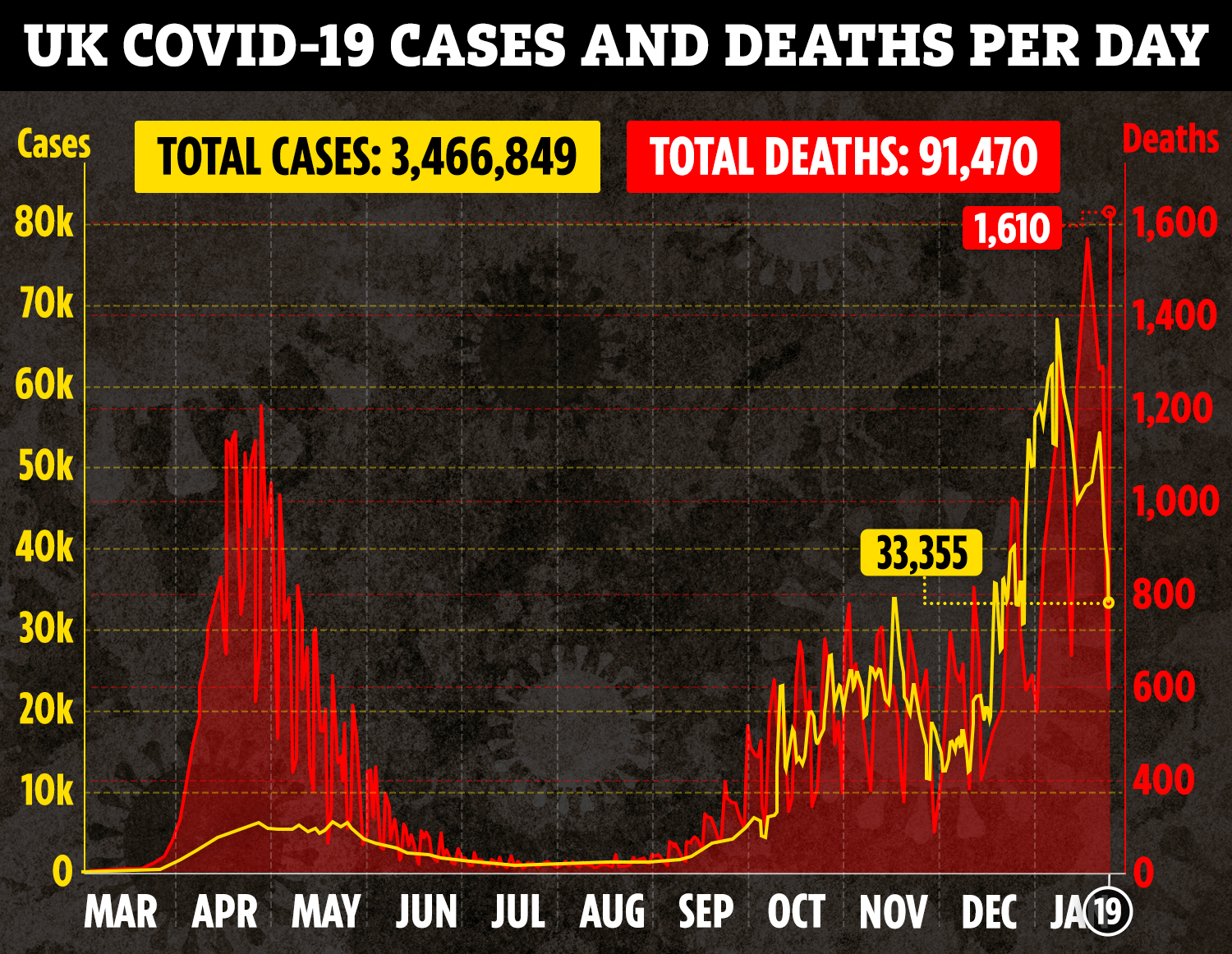 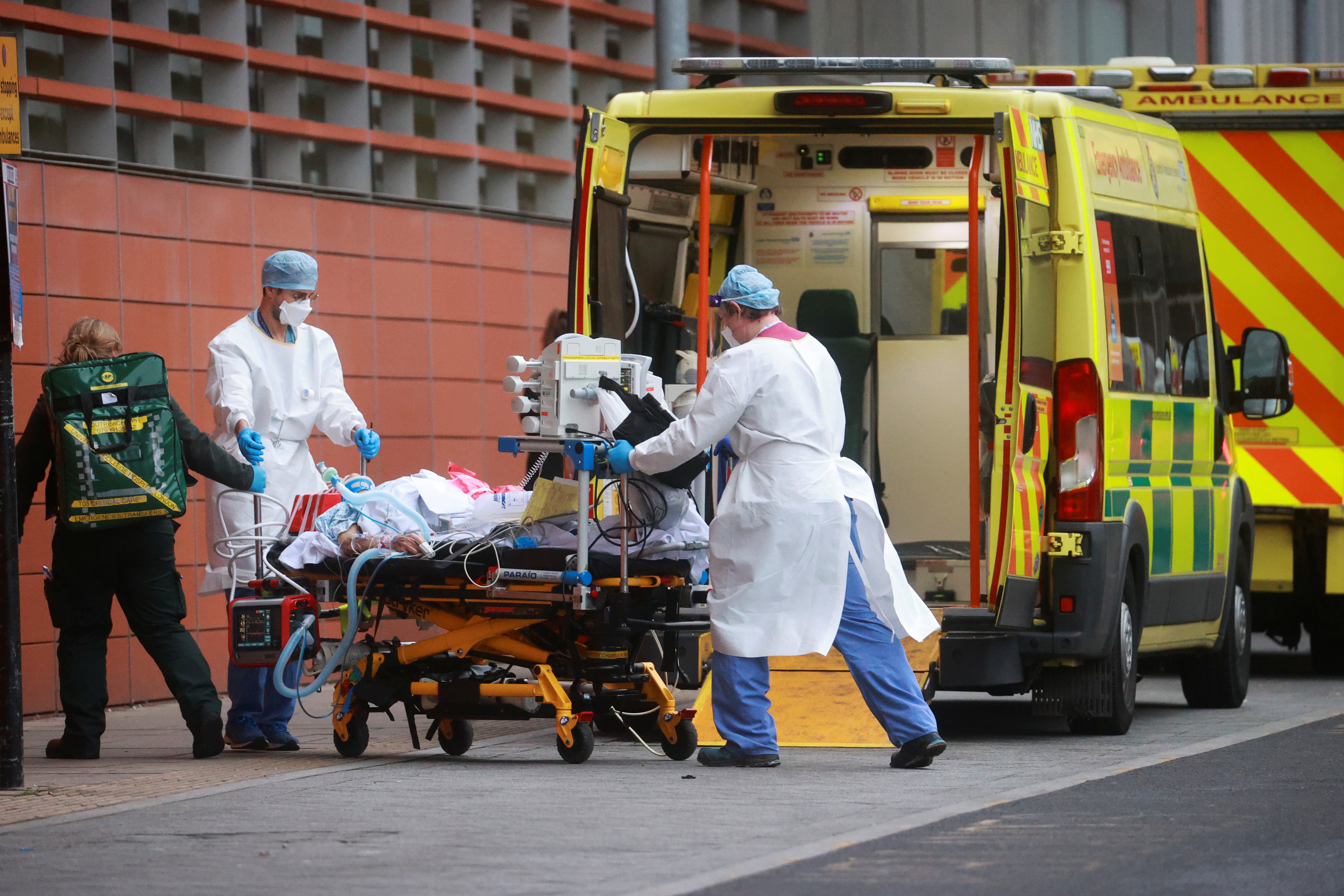 Official statistics now show that 3,466,849 people have caught the virus in Britain since the pandemic began last year.

And the total death toll has now reached a tragic 91,470.

Today's case figure is less than last Tuesday, when 45,533 new infections were recorded, alongside 1,243 deaths.

And the number of infections is also less than it was two weeks ago on January 5, when the UK recorded 60,916 new cases.

But today's death toll of 1,610 is the highest number of UK deaths reported on a single day since the outbreak began.

The second-highest daily death toll was reported on January 13, when 1,564 lost their lives to the virus.

The dramatic increase may partly be explained by a lag in reporting over the weekend.

The figures come as the nation wages war on Covid – giving out a total of 4,266,577 first doses of the vaccine in the UK between December 8 and January 18, according to official data.

There have been a further 1,106 cases of coronavirus in Wales, taking the total number of confirmed cases to 182,599.

Public Health Wales reported another eight deaths today, taking the total in Wales since the start of the pandemic to 4,302.

And a further 842 people who tested positive for coronavirus have died in hospital in England, bringing the total number of confirmed deaths reported in hospitals to 62,295.

Patients were aged between 28 and 104. All except 35, aged between 54 and 94, had known underlying health conditions.

This afternoon, the First Minister of Scotland confirmed the tough Covid curbs in the country will remain in place until "at least the middle of February".

Nicola Sturgeon made the announcement: "We cannot afford to see the rate of infections start to rise again – which from such a high baseline, it could all too easily do if we start to interact more than we are doing just now."

Meanwhile, Matt Hancock is self-isolating again – days after being spotted in a London park with his family.

The Health Secretary had coronavirus last year, but he's now back in isolation again after being pinged by track and trace.

He has to stay inside until at least Sunday after being in contact with someone who has tested positive for coronavirus.

One in six people have been infected with Covid in parts of England- as seven million people have now had the bug, according to the Office for National Statistic's Covid-19 Infection Survey.

Yorkshire has seen the highest percentage of people catching the virus, with 17 per cent of the population having antibodies.

Residents of London and the North West come in second and third – with 16.4 per cent and 15 per cent of people there respectively having been infected.

Overall in England, one in eight people had had coronavirus by December last year.

And army doctors are manning heaving intensive care units in London today, The Sun can reveal.

As the NHS struggles with wave after wave of Covid cases, medically-trained troops have stepped in at St George’s Hospital in Tooting, while servicewomen in fatigues were pictured at the Royal Free in Hampstead.

On Monday, 40 British Army medical technicians arrived at St George's, with a further 30 more due to start today in non-clinical support roles.

Meanwhile, ten new mass Covid vaccine super-hubs opened their doors to the public yesterday while over-70s received letters to get their jabs.

Boris Johnson hailed the new "milestone" in the race to vaccinate the country.

The next vaccination stage will see 4.6million in their 70s and older get the jab – as well as another one million who are "clinically extremely vulnerable".

This group includes people who have immune conditions, cancer or have received organ transplants.

And figures have shown that the third wave may be on its way out, as Covid cases are falling in every London borough as the capital pushes through the peak.

Infection rates have fallen across the 32 boroughs by an average of 25 per cent in the past week.

In England alone, official data shows 89 per cent of 315 local authorities have seen a fall in case rates in the past week. 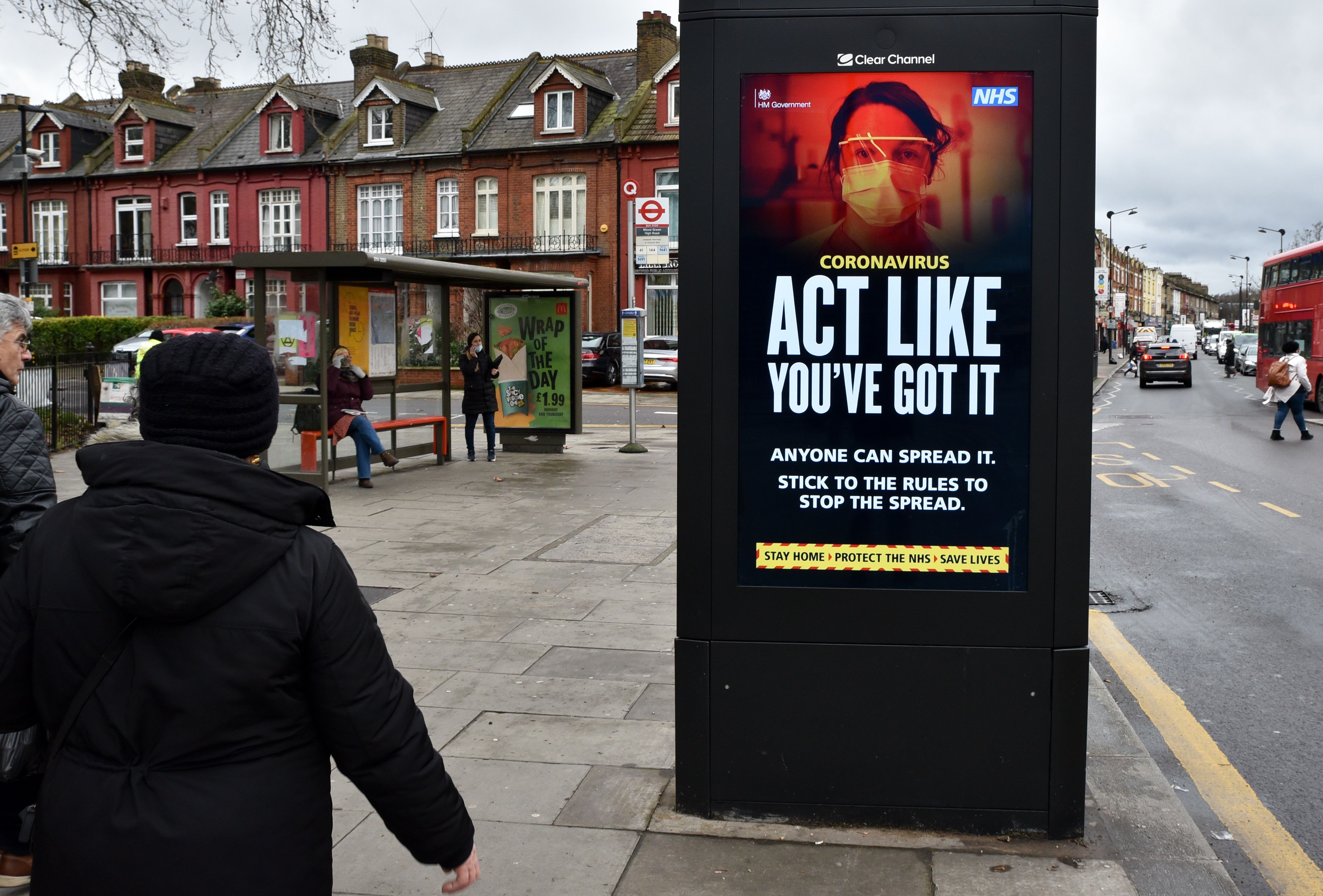