MET Office: Mercury to hit 27 on Friday as heatwave continues

Monday and Tuesday see a red warning over urban areas in England, ranging from Surrey up to Manchester and York.

The warning, in effect from midnight on Monday to the end of Tuesday, said: “Exceptional, perhaps record-breaking, temperatures are likely on Monday, then again on Tuesday. Nights are also likely to be exceptionally warm for the UK, especially in urban areas.

“This is likely to lead to widespread impacts on people and infrastructure. Temperatures are expected to drop away from Wednesday onwards.” 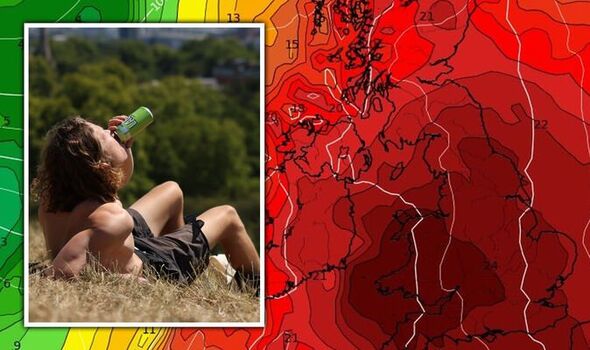 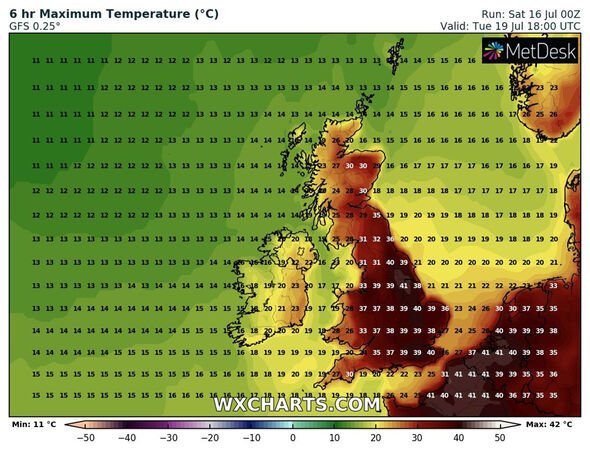 WHEN WILL TEMPERATURES PEAK?

According to WXCharts’ maximum temperature forecasts, the heat will be at its most extreme from 3pm to 6pm on Tuesday.

In the evening, the hottest temperature forecast is 41C in Lincoln, with 40C also forecast in London, Surrey, Kent and Peterborough.

All of the south up to Dorset, the midlands and eastern Wales will see between 36C to 41C at 6pm.

Scotland and western parts of Wales will escape the worst of the heat at this time, but still will bake in temperatures between 23C to 30C. 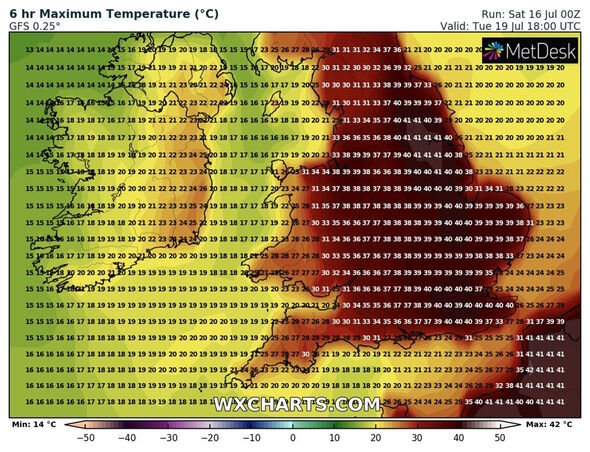 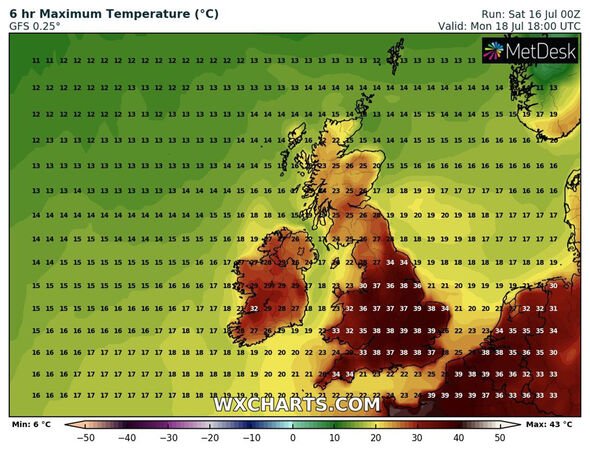 Monday also sees the hottest temperatures peak between 3pm to 6pm, with the highest figures at 40C in Cambridge and Peterborough.

While slightly lower than Tuesday, more of the country is affected by the extreme heat, with 6pm seeing almost all of England and all of Wales see temperatures between 33C to 39C. 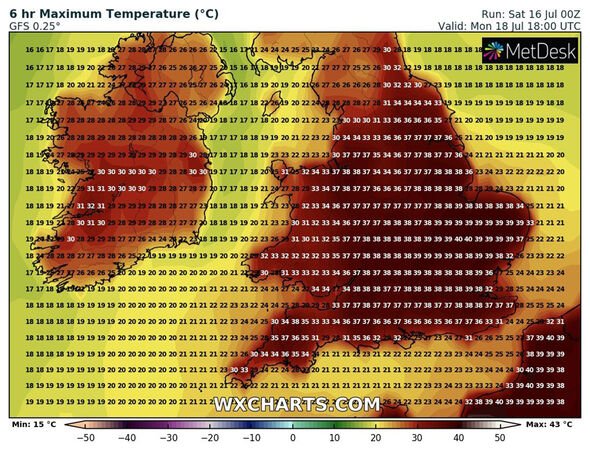 Jo Farrow, Netweather.tv forecaster, said on the agency’s website the heat “already exists over NW Africa and Spain, Portugal”, and will be pushed into Britain.

She wrote: “A cut off low will pump the very hot air northwards as our weekend high pressure glides to the east of the UK and helps pull the hot air towards the UK.

“Spain, Portugal and France already have heatwave warnings. With temperatures in the mid to high 30s and reaching 40C.”

She also added: “There is a high chance that the UK record will be broken and a fair chance that 40C will be reached.

“It looks to end by midweek, so relatively short-lived, with showers appearing from the SW then NW later on Tuesday and overnight into Wednesday.

“As the last of the heat fades from eastern Britain on Wednesday there could be heavy, thundery showers but a lot of uncertainty.” 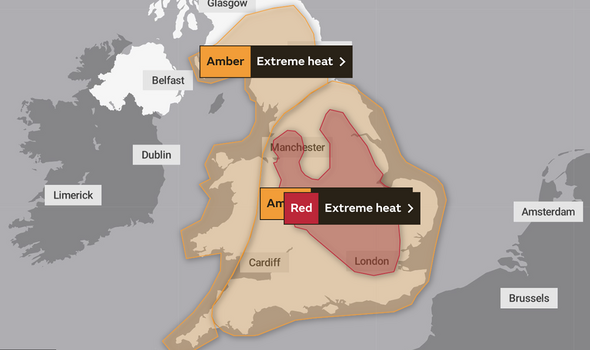 The Met Office described the forecast heat that is coming from France and Spain as “absolutely unprecedented”.

They urged people to treat it like a storm warning and consider changing plans.

Bob Ward, the policy director at the Grantham Research Institute on Climate Change and the Environment, said: “We could see 1,500 to 2,000 deaths just from this one period of heat.”

The Government’s Cobra emergency committee met on Thursday to discuss the heatwave and officials are to meet again over the weekend.