Charts from Net Weather show hot air pushing towards south east Engalnd from Northern Europe on Thursday, June 3, as temperatures hit 28C in France. Jessica Storm, a meteorologist at Accuweather, said the heat will cause “above average” temperatures to sweep over the whole of the UK as far north as Scotland, next week. South eastern regions are expected to bask in the hottest highs of 23.C at the start of the week, with Scotland also seeing 20C.

The heat maps from WXCHARTS also show London and the south east averaging at least 20C between a seven day period between Sunday, May 30, and Sunday, June 6.

Thursday and Friday may see temperatures cool slightly to 18C in Kent, Essex and London, but this means the heatwave will still remain.

“Places like Inverness, Scotland, can have temperatures around 20C, just above average there at the end of the weekend into early next week. 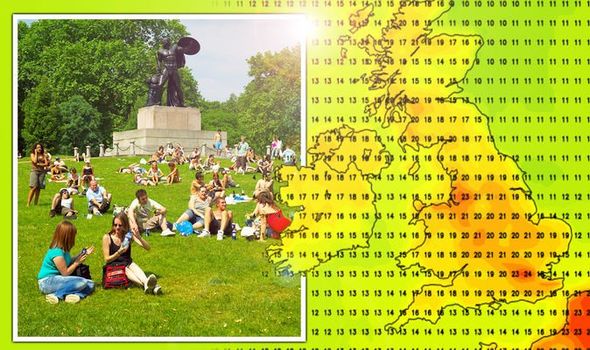 “Edinburgh is also forecast to reach around 20C on Monday, while average temperatures there at the end of May usually only reach around 14C.

“Then, as the week continues, the core of the heat is expected to move toward Wales and western England, impacting places like Cardiff, Wales, where temperatures will approach 21C on Tuesday, which is above normal for this time of year.

“London is anticipated to 23.3C on both Monday and Tuesday, while usually the city only reaches the mid-60s (18C) toward the end of May.”

Brian Gaze, a forecaster at Weather Outlook, confirmed yesterday the hot air will arrive from Europe next week. 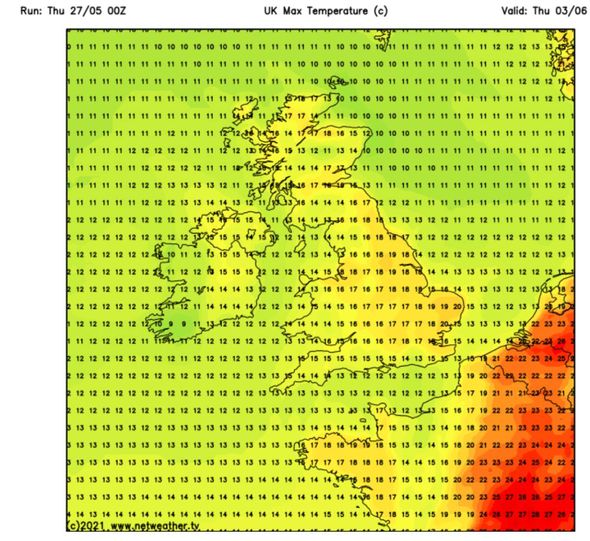 He added the continental heat plume could send temperatures in the south soaring to 27C.

He told Express.co.uk: “At the moment I think it is unlikely that we will see 30C being hit during the first third of June, but 27C (81F) in the southern half of the UK would not surprise me.

“Given the long run of low temperatures that would certainly feel hot to many people. The source of the warmth depends on where high pressure becomes centred, but either from continental Europe or the southwest.”

The Met Office’s long-range forecast between Monday, May 31, and Wednesday, June 9m added next week could see “warm, settled conditions”. 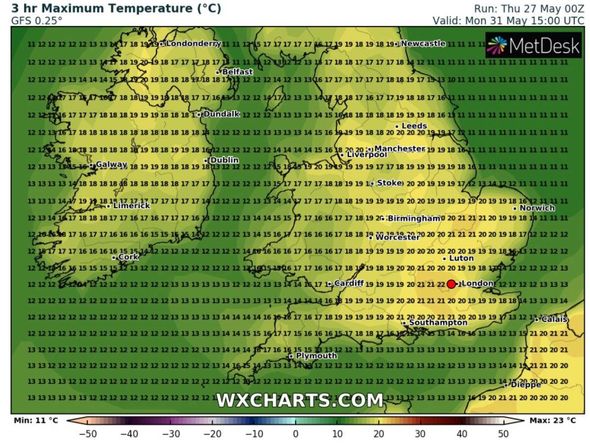 The sunshine may be broken up by spells of brief rain, but temperatures will still be “above average”.

The forecast said: “Warm, settled conditions are likely to persist across many areas during early next week.

“There is the potential for outbreaks of rain to arrive across parts of the northwest on Monday but it is then very uncertain how far south and east more unsettled conditions develop during next week.

“Whilst there is still likely to be a good deal of dry weather, showers, which could be heavy, become more likely across the south and west during the latter part of next week. 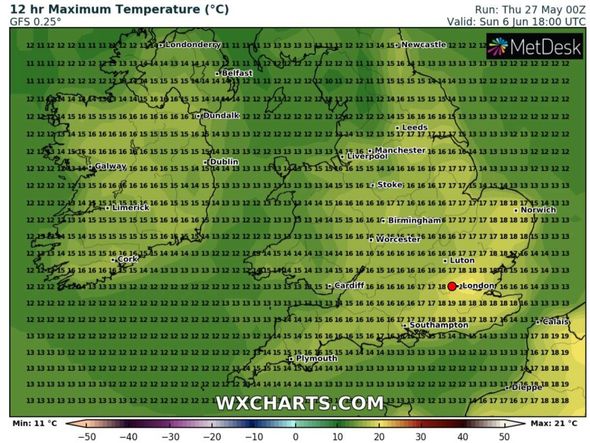 “Temperatures most likely remaining around or above average.

“By the end of the period, a northwest-southeast split in conditions becomes more probable; more unsettled and cooler in the northwest, drier and warmer in the southeast.”

The BBC’s long-range forecast added early June could potentially then see “very warm African air” arrive too, depending on where the high pressure builds.

The forecast between Monday, May 31, and Sunday, June 6, said: “The main alternate scenario for early June is that high pressure from the bank holiday weekend builds strongly into Scandinavia instead of shifting into Russia. 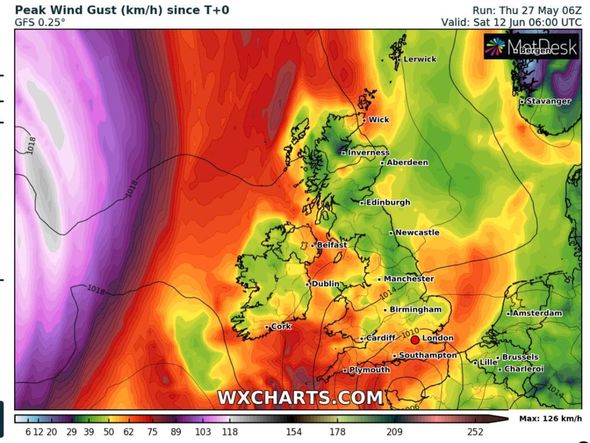 “This is a mostly drier pattern, but with high pressure to the east the winds would instead shift to southerly and allow us to tap into warmer African and Mediterranean air.

“This is potentially a very warm pattern and there is a chance for thunderstorms to drift in from the south.

“However, there are stronger signals for the high to just be a short-lived feature instead, so we think there is a roughly 30% chance of the drier, warmer pattern.”