British PM wins support of her cabinet for the draft divorce deal with EU, but the parliament test lies ahead. 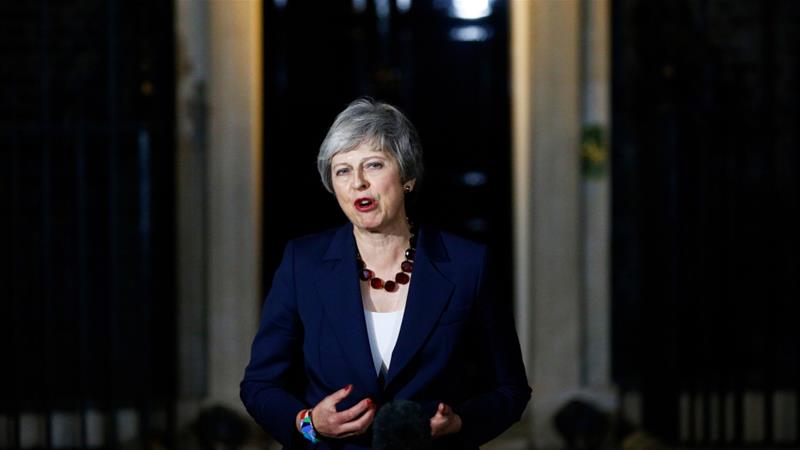 The British government has agreed to go ahead with a draft withdrawal agreement on Brexit, Prime Minister Theresa May has announced.

May on Wednesday night announced the decision after the cabinet members discussed the proposed deal to leave the European Union for nearly five hours.

“The collective decision of the government was that the cabinet should agree to the draft agreement and the outlying political delclaration,” May said in front of 10, Downing Street.

“This is a decisive step, which allows us to move on and finalise the deal in the days ahead,” she added. “These decisions were not taken lightly, but I firmly believe they were in the national interest.”

Earlier on Wednesday, May said the draft deal with regards to Brexit will adhere to what people voted for during the 2016 Brexit referendum.

“What we have been negotiating is a deal that does deliver on the vote of the British people,” May told MPs after the UK and EU finalised the details of their plan on Tuesday.

Before her meeting with the cabinet, May defended the deal before a group of MPs from her own Conservative party, whose hardline Brexit supporters have said it included unacceptable compromises.

The embattled leader will again face opponents on Thursday, when she is expected to defend the deal in the British parliament.

“This deal, which delivers on the vote of the referendum, which brings back control of our money, laws and borders, ends free movement, protects jobs, security and our union, or leave with no deal or no Brexit at all,” she said.

“I know that there will be difficult days ahead, and this is a decision that will come under intense scrutiny and that is how it should be and entirely natural,” May added.

“It is my responsibility to defend any decision the government has taken and I stand ready to do that, beginning tomorrow with a statement in parliament.”

In her statement, May said the agreement included a solution to avoid a hard border in Ireland.

“The choices before us were difficult, particularly in relation to the Northern Ireland backstop,” she said, within giving details about what solution will be.

Al Jazeera correspondent Paul Brennan said the next 24 hours will be crucial for both Brexit and the May government as a whole.

“The reaction has been almost universally opposed to the deal, both the Brexiteers and those who want to stay in the EU are extremely unhappy,” he said.

The Irish border has been a key issue during negotiations between London and Brussels.

Both have vowed to prevent the re-emergence of a hard border between the Republic of Ireland and Northern Ireland, which will leave the EU with Britain, amid fears the issue could reignite decades-old tensions.

But the two sides disagreed for a long time on how to resolve the issue.

Earlier on Wednesday, Jeremy Corbyn, leader of the main opposition Labour Party, said the agreement “breaches the prime minister’s own red lines”, adding that negotiations with Brussels had been “shambolic”.

“This government spent two years negotiating a bad deal that will leave the country in an indefinite half-way house,” Corbyn said.

“You are not delivering the Brexit people voted for and today you will lose the support of many Conservative MPs and millions of voters,” Bone said.

Following the UK’s announcement an agreement was signed, Ireland’s Prime Minister Leo Varadkar said on Wednesday that an emergency EU summit could be held on November 25 to vote on the deal.

UK parliament would then vote on the Brexit accord.

If successful, the whole Brexit process should be concluded on March 29, 2019, almost three years after the referendum was held.

“The real problems will arise in parliament, because there is no majority and if they don’t approve that’s when we’re really in uncharted territory because we might be looking at general elections,” Brennan said.

The Brexit agreement comes after months of intense negotiations between UK and EU leaders and mounting pressure on May.

Last month, May said she was “ready to consider” extending a transition phase after the UK leaves, according to officials.

Such an extension, keeping Britain under EU governance with no say in it, would be highly unpopular with hardline supporters of Brexit.

The idea of a one-year extension to the transition period had been proposed by EU Brexit negotiator Michel Barnier.

This would buy more time to negotiate the future relationship between Britain and the EU, which could potentially help to make progress on the Irish border issue.