Brits braced for 86F as 'dry weather' still on schedule

Despite the promising rain, the UK has resumed its drought over the last week, and hosepipe bans remain for the time being. Temperatures remain in the high 20C range, hitting 27C and above in parts of the southeast, accompanied by significant humidity. But weather forecasters have identified another spell of rain inbound for the UK this week that will bring these temperatures down again.

Outbreaks of “heavy, thundery rain” will arrive in a band from the south coast, moving northwest from 12am to 3pm.

Showers will deposit between 10mm and 20mm and hour for 15 hours over “quite a large area”, with some areas likely to see 30mm to 50mm or more.

The Met Office has placed 26 areas across the East Midlands, East of England, and London and South East within its warning area. 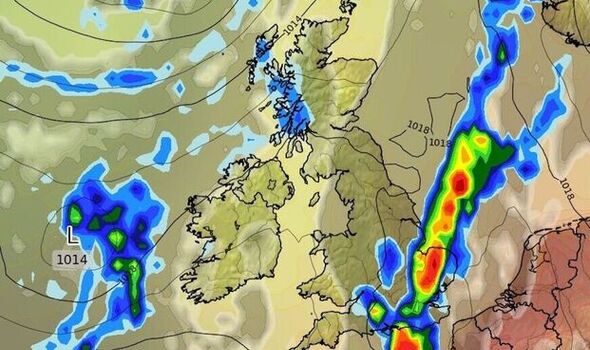 The affected locations include:

While the Met Office is not expecting a “danger to life” over Thursday, there are other risks.

On Thursday, Britons will likely have to negotiate more perilous driving conditions caused by spray and “standing water”.

Some areas may experience loss of power or other services due to the storm, and lightning strikes could damage buildings.

Many Britons will welcome the rain tomorrow, but it may end up as another one-off.

Weather maps from WXCharts show only one more band of rain this week, due briefly over seven areas.

From 3am on August 27, the rain will descend over London and the South East, covering the capital city before moving up to Birmingham.

The band of rain will shrink to cover just London and parts of Oxfordshire and Cambridge by 9am, before growing again at 12pm.

The following regions will see light rainfall – between 0.2mm and 0.6mm per hour – from 3pm to 6pm: