BRITAIN will be warmer than the Algarve during summer's last blast – and forecasters have predicted the exact date a 28C mini heatwave will arrive.

The fall-out from Hurricane Ida – which has devastated swathes of the US – will force a change here after weeks of dull grey skies. 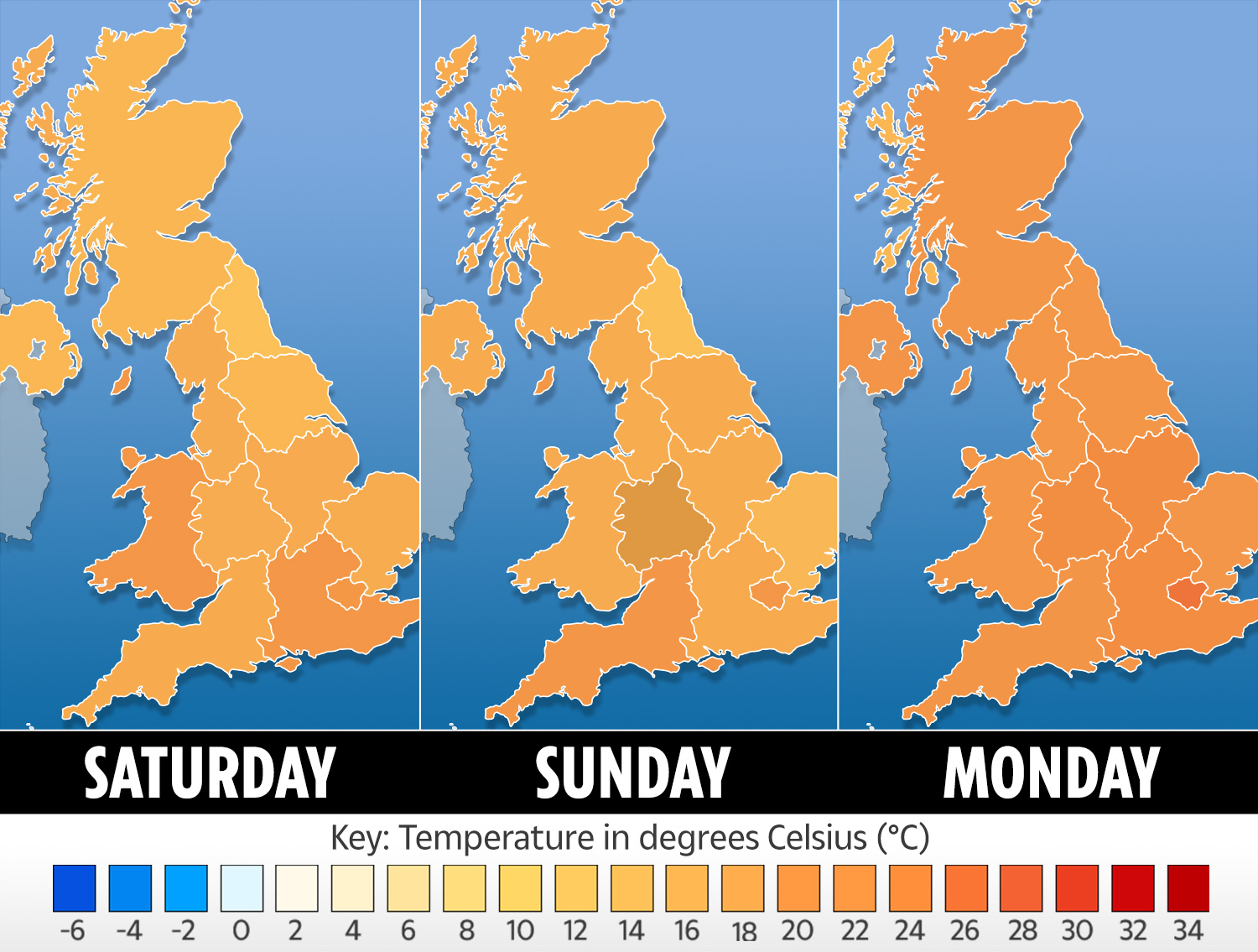 A change in the jet stream will finally allow some sunshine to hit the UK at the weekend, with the mercury set to soar on Sunday.

The hottest temperatures are expected in London and the south-east thanks to a plume of scorching air straight from the Mediterranean.

However, much of the country will bask as the mercury expected to hit the mid-20s in most places.

Met Office forecaster Alex Burkill said: "It does look like hot temperatures will start to arrive in the south-east after a disappointing end to the summer.

"August had been particularly grey, dull with cooler temperatures, but it does look like there will be a little blast of summer weather.

"The week will start with temperatures reaching 27C on Monday.

"It's likely to be dry and sunny for most, but this will only be the beginning.

"Tuesday is likely to be the hottest day, with temperatures probably reaching highs of 28C or even higher before it drops slightly again on Wednesday."

His colleague Alex Deakin said the sunshine will arrive on Sunday, with 25C expected.

"It's bright and it's fine and it should be warmer as well," he said.

"The weather front will still be around into next week. So will the warm air.

"Temperatures next week are looking quite a bit higher than this week."

'THIS IS ONLY THE BEGINNING'

Meteorologists had said that, while the impact of Ida won't be directly felt in the UK, the hurricane's force would still be felt here.

Earlier this week, Met Office spokesman Grahame Madge told Sun Online:"What these hurricanes do is bring warm humid air into the North Atlantic, which can have the effect of pepping up weather systems already in place.

"Although we're not going to see the effects directly, it'll invigorate the jet stream."

The final days of sunshine will come as a welcome relief to Brits who have faced one of the bleakest summers in years.

But despite that, forecasters say it's likely to be in the top 10 warmest on record.

The news will likely come as a surprise to those who gave up holidays abroad amid uncertainty over the traffic light system to enjoy staycations.

Parts of the UK have seen large amounts of rainfall for the time of year.

The City of London has experienced its ninth wettest August on record.

And optimistic bookies are predicting that September will be one of the warmest ever.

Coral has slashed the odds from 3-1 to 6-4 on this month beating records for heat in the UK, saying early reports suggest it will be "warmer than average".

John Hill, who works for the bookmakers, said: "The early reports suggest we could be set for a hotter September than average this year.

"We have slashed the odds on it being a record hot September, which indicates we are set for one last heatwave this summer."

Mr Burkill said there could be plenty of warm days to come this month.

"This is not yet an Indian Summer, as that usually comes in towards the end of September, but I'd certainly agree that we haven't seen the last of the hot and sunny weather for the moment," he said.

Lukashenko tries to keep security forces on side with medals, appeal