THE UK is bracing itself for "severe" thunderstorms this weekend as the Met Office has extended its weather warnings to cover the whole country.

Weather forecasters are predicting 60 hours of torrential rain, hail and flash floods in every region from Sunday evening, but hot weather is coming with it. 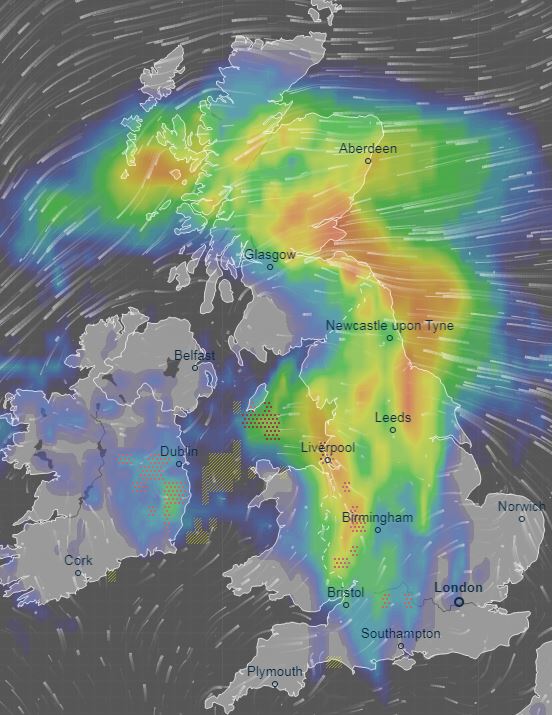 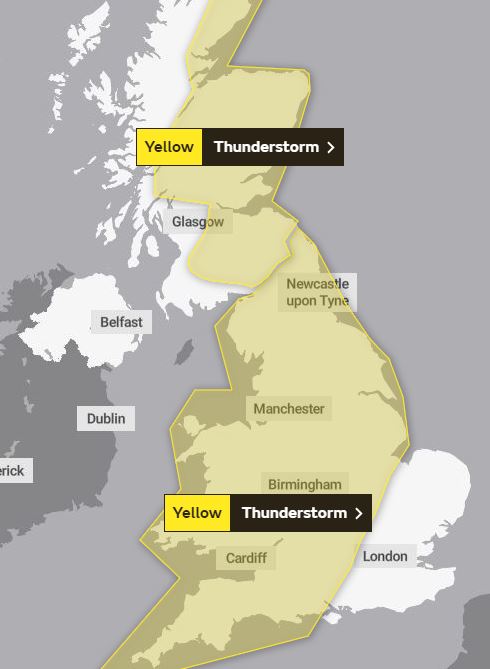 Yesterday, the Met Office warned of thunderstorms across England and Wales.

But the threat has now been moved into Scotland too – meaning no area of the UK is safe from the storms this weekend.

The rain won't be bringing cold with it – as temperatures are set to soar into the 20s bringing a humid feel to the weather.

The storms are set to arrive on Sunday following dry and sunny spells today.

Issuing the yellow weather warning on its website, the Met Office said: "Thunderstorms may develop bringing torrential rain and lightning, with possible flooding and disruption to travel."

It added that homes and businesses could be "flooded quickly", with damage to some buildings from "floodwater, lightning strikes, hail or strong winds".

There is also the danger of power cuts leaving many without electricity, as well as spray on the roads that could cause traffic chaos.

The yellow weather warnings are in place right from the very north coast of Scotland down to Land's End.

We should expect deep flash floods, which could cause homes to flood and roads to close.

There is also a chance that hail could result in "rapidly changing, dangerous driving conditions".

The Met Office warns communities could be cut off and there could even be a danger to life.

The warning is in place from 9pm on Sunday until 11.59pm on Monday.

By Tuesday, the yellow warning will move further south, leaving Scotland and Northern Ireland in the clear.

England and Wales will still be at risk of heavy thundery showers and flooding.

This warning will be in place until 11.59pm on Tuesday – meaning a total of 60 hours of thunderstorms and rain.

Helen Roberts, the Met Office's Senior Meteorologist, told The Sun Online: "Saturday will be largely a dry day with some sunshine.

"But Sunday is where we start to see a change coming.

"An area of low pressure is due to come in from the Atlantic and that will bring increasing cloud across the country during the day.

"Later in the day on Sunday we will start to see thundery showers develop."

The frequent and heavy showers bring a risk of "damage from intense local downpours", she added.

"A risk of lighting is there too especially with thunderstorms."

Ms Roberts warned: "There will certainly be flooding – lots of localised flooding, which means some villages could be dry while neighbouring villages are completely saturated in heavy downpours.

"That's definitely going to be an issue.

"These conditions are especially dangerous for drivers who may be driving down a road at some speed in clear conditions and then all of a sudden they're in a heavy downpour.

"At the moment we have a broad warning area covering pretty much all of England because there's a lot of uncertainty about where will be worst affected."

But once the storms clear, the UK is set for a hot week.

As the continent basks in highs of over 40C, we will feel the benefit – with hot air coming westwards.

Next Wednesday and Thursday are set to be the hottest of the year so far – with the mercury tipping over the 30C mark.

After such a cool and wet start to summer, many places are set to see scorching weather through next week

Sara Thornton, director of digital weather company Weathertrending, told The Sun Online: "As the summer solstice arrives and the days begin to shorten again, still nobody in the UK has reached 30C yet.

"And that’s unusual by midsummer. But after such a cool and wet start to summer, many places are set to see scorching weather through next week.

"After a fine weekend for us, the real heat arrives behind a warm front by Monday.

"Across parts of Spain, Portugal and the western Mediterranean, near 40-degree temperatures will be brewing up; and some of this blistering heat looks like escaping northwards and wafting our way.

"As usual, its southern and eastern parts of the UK which look set to see the highest temperatures – reaching the low 30s in some places.

"That’s over 20 degrees higher than earlier in the month.

"It will get uncomfortably humid for many, too, with some steamy nights to come.
"But here’s the catch. Whilst the higher temperatures next week will bring a dramatic change to the feel of our summer, it doesn’t mean that the downpours are behind us.

"In fact there’s potential that we may experience 'Spanish Plumes’ of thundery weather heading in our direction.

"With so much heat and moisture in the atmosphere, there’s the potential for some violent storms and further flash flooding.

"So the hot spell looks like being a bit of a double-edged sword. Very warm but, for some, very wet.

"Those hoping this will mark the start of a long, hot summer may be disappointed too. The heat may prove to be a 'flash in the pan', with much cooler weather returning by next weekend."

It came after up to 600 people were evacuated after “unprecedented” downpours saw double the monthly rainfall in just three days at Wainfleet, Lincs. 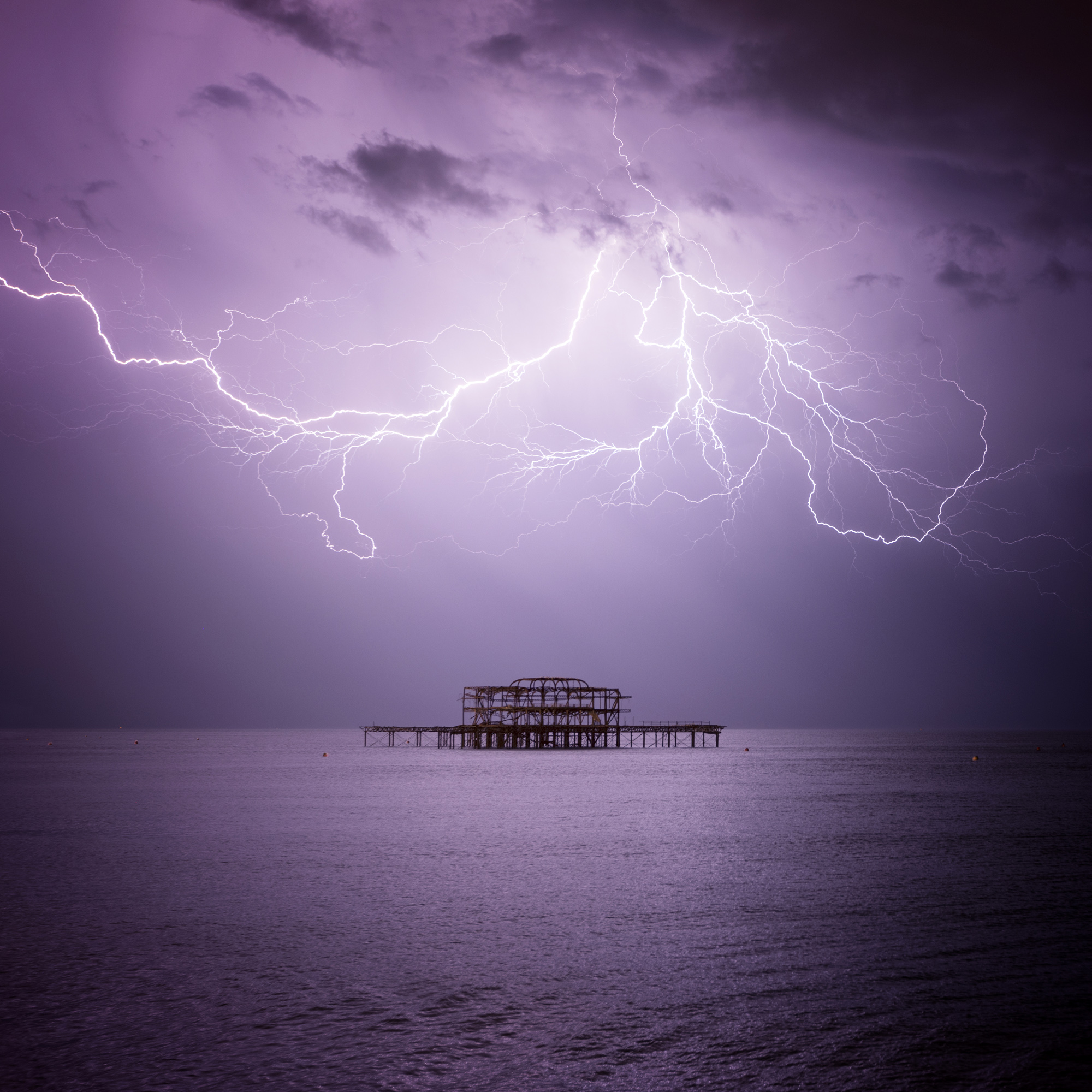 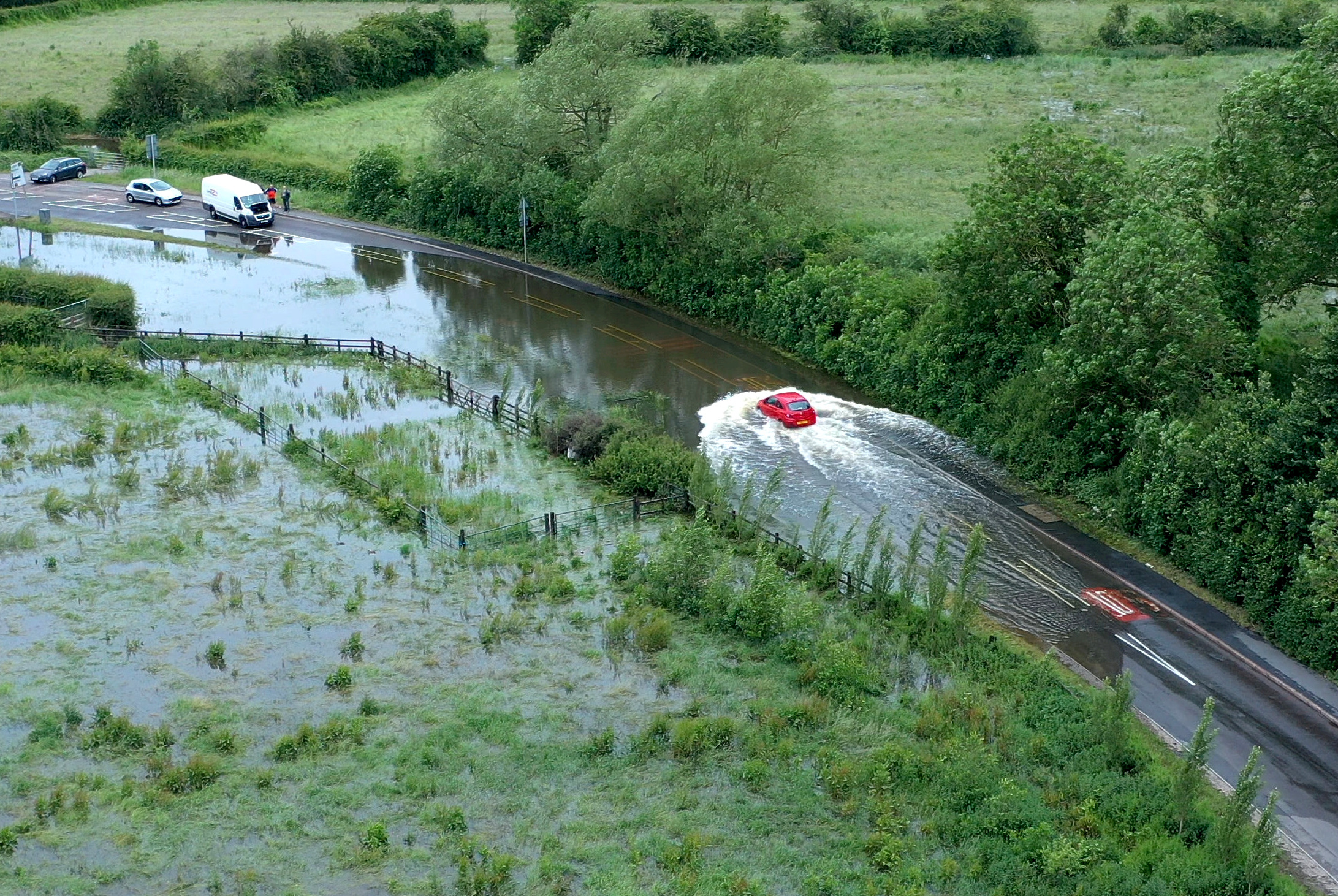 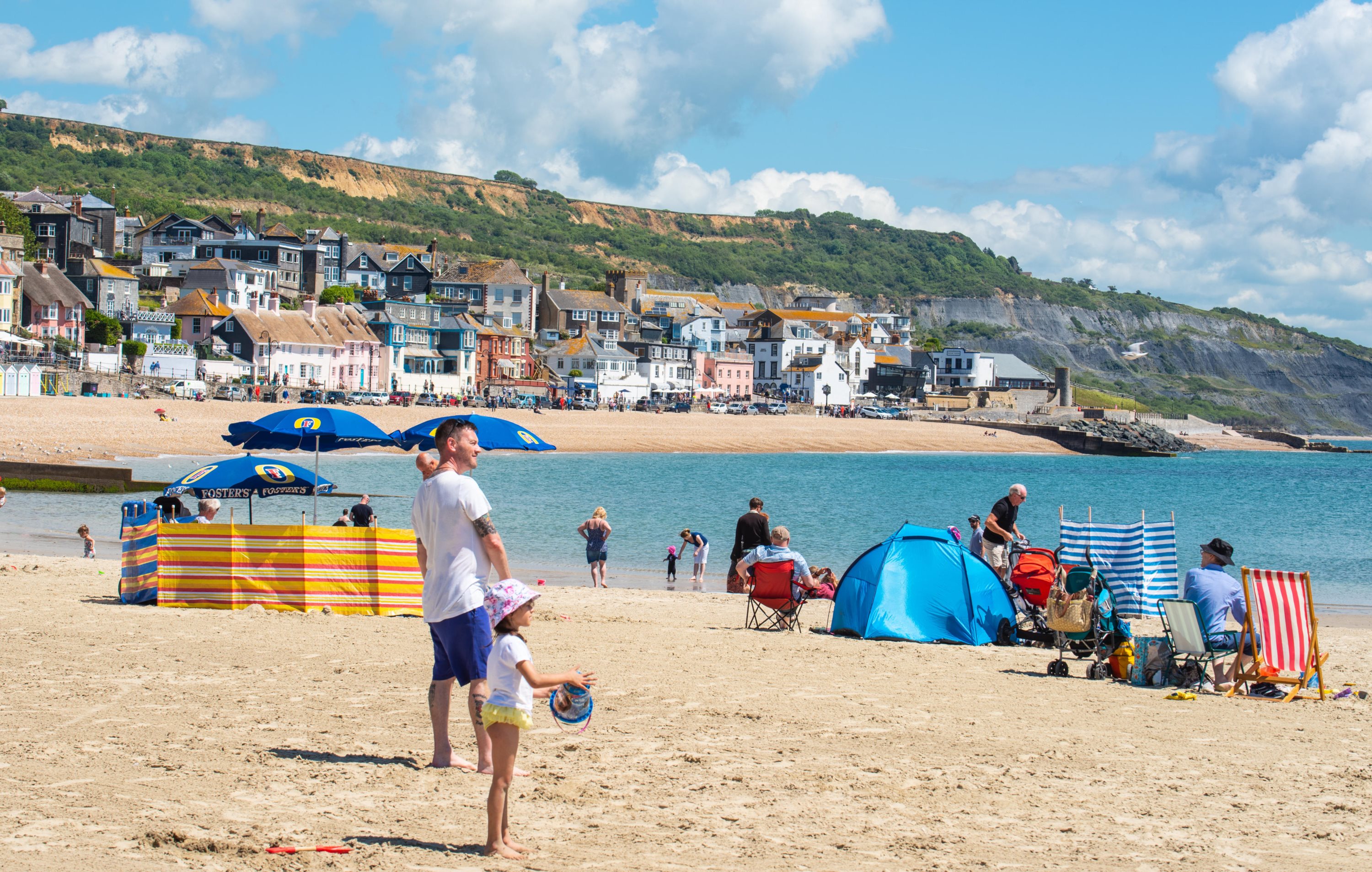 What are the sticking points in Brexit trade talks?