Minsk/Moscow: Belarusian President Alexander Lukashenko said he had secured a pledge from Russia to provide comprehensive assistance if needed to ensure the security of his country in a phone call with President Vladimir Putin on Saturday.

The two presidents spoke as tens of thousands of people took to the streets of Minsk once again urging Lukashenko to quit and staff at the Belarusian state broadcaster BT considered joining a wave of strikes and mass protests. 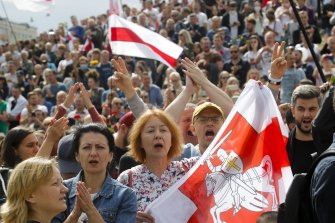 People with old Belarusian National flags gather at the place where Alexander Taraikovsky died amid the clashes protesting the election results, during his civil funeral in Minsk, Belarus, on Saturday.Credit:AP

Accused of rigging last Sunday's election, Lukashenko had earlier appealed to Putin for help as he grapples with the biggest challenge to his 26-year rule and the threat of new Western sanctions.

Ties between the two traditional allies had been under strain before the election, as Russia scaled back the subsidies that propped up Lukashenko's government. Russia sees Belarus as a strategic buffer against NATO and the EU.

The state news agency Belta cited remarks by Lukashenko that "at the first request, Russia will provide comprehensive assistance to ensure the security of Belarus in the event of external military threats".

A Kremlin statement made no mention of such assistance but said both sides expressed confidence that all problems in Belarus would be resolved soon.

Statements by both sides contained a pointed reference to a "union state" between the two countries.

The neighbours had signed an agreement in 1999 which was supposed to create a unified state. The unification project was never properly implemented and more recently Lukashenko had rejected calls by Moscow for closer economic and political ties as an assault on his country's sovereignty.

Russia has been wary of unrest on its borders since Georgia's 2003 Rose Revolution, Ukraine's 2003-04 Orange Revolution and 2014 Maidan protests – events in which it says the West backed the protesters.

The European Union is gearing up to impose new sanctions on Belarus in response to a violent crackdown in which at least two protesters have been killed and thousands detained.

On a visit to neighbouring Poland, US Secretary of State Mike Pompeo said Washington was discussing the situation with the EU.

The leaders of Estonia, Latvia and Lithuania called on Belarus to conduct new "free and fair" elections. Lukashenko said he did not need foreign governments or mediators.

Ramping up the rhetoric, Lukashenko said an air assault brigade would move to the border with Poland, after expressing concerned over the NATO military exercises being conducted in Poland and Lithuania, which he sees as an arms build-up.

In Minsk, people gathered to lay flowers where one of the protesters was killed this week, waving flags and chanting "go away" and "Lukashenko is a murderer".

The crowd also converged outside the state broadcaster BT. Several staff, including presenters, walked out of the building, saying they had resigned, while a red-and-white opposition flag was mounted outside. Later riot police were seen going inside.

Some of the country's biggest state-run industrial plants, the backbone of Lukashenko's Soviet-style economic model, were hit by protests and walkouts this week.

He plans on Monday to go to the Minsk Wheel Tractor Plant, whose workers have joined the protests.

In a video posted by TUT.BY media on Saturday, the head of the plant, Аlexey Rimashevskiy told workers that he voted for Lukashenko but "I accept that he lost them [the elections]" – unusually outspoken comments from an official at a state-run factory.

Lukashenko has accused the protesters of being criminals and in cahoots with foreign backers. Moscow this week also accused unnamed countries of "outside meddling" in Belarus.

In a further sign of wanting to mend fences with Moscow, Lukashenko handed back 32 Russian members of a private security firm who were detained before the election on suspicion of plotting to destabilise Belarus.

The decision angered Ukraine, as Kyiv had asked Minsk for the extradition of 28 of them on suspicion of fighting alongside Russian-backed separatists in its eastern Donbass region.

"Former president of #Belarus now asks Putin for help. Against whom? Against own people carrying flowers on the streets?" Lithuania's Foreign Minister Linas Linkevicius tweeted.

Opposition presidential candidate Sviatlana Tsikhanouskaya, who fled to neighbouring Lithuania on Tuesday, has called for more protests and an election recount.

Her campaign announced she was starting to form a national council to facilitate the transfer of power.

Tim Davie says BBC was not 'dragged into' improving impartiality