London: Billionaire Chinese businessman Jack Ma is expected to resign as president of his elite entrepreneur academy as authorities pile more pressure on his business empire.

The founder of e-commerce business Alibaba and financial technology company Ant Group has faced intense scrutiny of his operations in recent months.

Authorities in China have reportedly grown concerned that serving as president of the organisation could have allowed Ma to lead the creation of a new generation of entrepreneurs who may have gone on to influence Chinese politics. 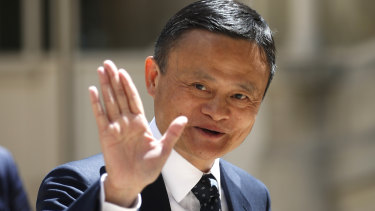 Regulators have piled pressure on the founder of e-commerce group Alibaba and his business empire.Credit:AP

Ma, known in the West as “the Steve Jobs of China”, will no longer be president of Hupan University, an executive training institute he founded six years ago in his home city of Hangzhou, the Financial Times reported.

The entrepreneur was expected to remain connected to the organisation. A photograph of Ma that had been displayed on the organisation’s website was recently deleted and replaced by an image of a classroom.

Videos circulating on social media showed someone using a blowtorch to remove the organisation’s name from a sign in front of its campus. Chinese state media has recently criticised the organisation and called it a “privately run non-business organisation, not a degree-granting educational institution”.

The organisation announced last week that it would remove “university” from its name and rebrand to Hupan.

Ma spent several months at the end of 2020 out of the public eye following a private dressing down by Chinese regulators.

The country’s authorities forced the cancellation of Alipay’s blockbuster $US35 billion ($45 billion) stock market float, which was poised to be the world’s largest ever listing.

The Chinese government had grown concerned after Ma delivered a speech in which he criticised regulators for stifling innovation and not paying sufficient heed to development and opportunities for the young.

In the speech, Ma suggested that big banks had a “pawnshop mentality” and that lending decisions should be based on data, not collateral.

Ant Group has since been forced to restructure its business so that it operates more like a traditional bank instead of a technology company.

A spokesman for Hupan University did not respond to a request for comment.

Beautician with ‘no qualifications’ faces jail after ‘mangling’ client’s lips