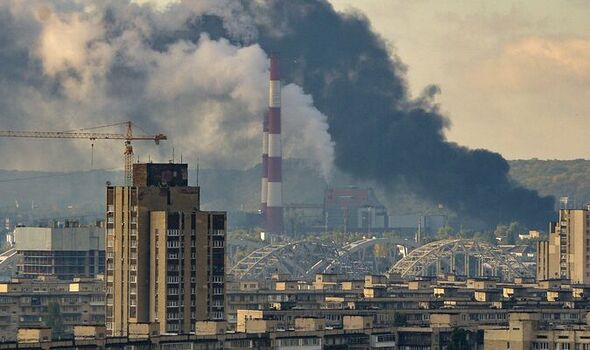 The US embassy in Kyiv has urged Americans in the country to flee following Vladimir Putin’s brutal missile strikes in several major cities. It sent out an email to all citizens in the country urging them to leave “when it is safe to do so”.

The news comes as the Kremlin launched missile strikes across Ukraine’s major cities including Kyiv, Kharkiv and Lviv as apparent revenge for the blast which damaged the Kerch bridge.

The email reads: “Russia has launched attacks against Ukraine’s civilian infrastructure as well as government facilities in Kyiv and elsewhere.

“The U.S. Embassy urges US citizens to shelter in place and depart Ukraine now using privately available ground transportation options when it is safe to do so.”

Kyiv said that the country had been hit by at least 75 missiles in the latest barrage.

Images out of Kyiv showed civilians soaked in blood surrounded by flaming cars and damaged buildings following a blast this morning.

Ukraine’s President Zelensky said on Telegram that Putin was trying to “wipe Ukraine off the map”.

He said: They are trying to destroy us and wipe us off the face of the earth…destroy our people who are sleeping at home in Zaporizhzhia. Kill people who go to work in Dnipro and Kyiv.

“The air raid sirens do not subside throughout Ukraine. There are missiles hitting. Unfortunately, there are dead and wounded.”

The strikes come following an attack on the Kerch bridge, connecting Russia and the illegally annexed Crimean Peninsula.

The bridge was a pet project for Vladimir Putin and the explosion, thought to have been caused by a truck bomb, destroyed one side of the road bridge and damaged the adjacent train bridge.

That attack infuriated Russian officials who have called for strikes on Ukrainian cities.

He said: “The Kyiv regime, with its actions, has put itself on the same level as international terrorist organisations.

“It is obvious that the Ukrainian secret services ordered, organised and carried out the terrorist attack aimed at destroying Russia’s critical civilian infrastructure.”

The Kerch bridge has been used as a major supply route for Russian forces in southern Ukraine.

Putin added: “If attempts to carry out terrorist attacks on our territory continue, Russia’s responses will be harsh and, in terms of their scale, will correspond to the level of threats posed by the Russian Federation. Nobody should have any doubts about this.”

The comments prompted outrage among Ukrainian officials whose citizens have been living through a war started by Putin.

“Less than 24 hours ago (Russian) planes hit a residential area of Zaporizhzhia with 12 missiles, killing 13 people and injuring more than 50.

“There is only one terrorist state here and the whole world knows who it is.”