Washington: The Biden administration has unveiled a broad-ranging plan to thwart China’s growing influence in the Indo-Pacific, singling out the “economic coercion” of Australia as one of the reasons for the US to bolster its presence in the region.

The White House released the new framework on Friday (Saturday AEDT) committing itself to a “free and open” Indo-Pacific, a day after US Secretary of State Anthony Blinken wrapped up his visit to Canberra and headed to Fiji.

The strategy is the result of months of consultation with regional allies, and makes a range of commitments, from addressing climate change to improving supply chains, to investing in a free press and developing AUKUS – the strategic military pact announced last year to help Australia acquire nuclear-powered submarines. 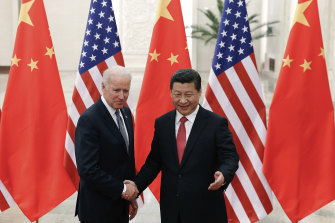 Joe Biden with Xi Jinping, pictured in 2013 when Biden was US vice-president. Credit:AP

It also commits to expanding the United States’ diplomatic presence in the region – particularly in south-east Asia and the Pacific – as well as strengthening ties with the Quad alliance between the US, Australia, India and Japan.

While a senior administration official told reporters that “this is not a China strategy”, the plan nonetheless notes the “intensifying American focus is due in part to the fact that the Indo-Pacific faces mounting challenges, particularly from the PRC [the People’s Republic of China].”

“The PRC’s coercion and aggression spans the globe, but it is most acute in the Indo-Pacific,” it says.

“From the economic coercion of Australia to the conflict along the Line of Actual Control with India, to the growing pressure on Taiwan and bullying of neighbours in the East and South China Seas, our allies and partners in the region bear much of the cost of the PRC’s harmful behaviour.”

On Saturday, the Associated Press reported the US plans would open an embassy in the Solomon Islands, laying out in unusually blunt terms a plan to increase its influence there before China becomes “strongly embedded”. The reasoning was explained in a State Department notification to Congress that was obtained by the AP.

Australia’s Foreign Minister Marise Payne on Saturday reiterated ongoing diplomatic efforts by the Quad and ASEAN were “about promoting a region in which all countries are able to be and feel sovereign and secure without the threat of coercion or intimidation”.

“Australia has welcomed the development and growth of China over the years. But we have always said that we will also act in protection of our national interests as a sovereign nation,” she said.

The strategy’s release comes after a challenging year in foreign policy for President Joe Biden, who came under fire over the botched withdrawal of troops from Afghanistan, and is currently bracing for a possible Russian invasion of Ukraine.

Other commitments in the Indo-Pacific strategy include maintaining stability across the Taiwan Strait, and working with its allies to deliver on 2030 and 2050 emissions targets.

And in another sign of deepening ties, Biden also announced that the US would host the Asia-Pacific Economic Cooperation’s annual meeting next year.

Meanwhile, the administration is considering setting up a new digital free trade pact, which could reduce barriers that currently hinder international transactions, thwart competition and heighten the risk of cyber hacking and privacy breaches.

The idea was recently highlighted by the bipartisan Congressional Friends of Australia Caucus, which wrote to the President and US Trade Representative Katherine Tai in November, urging the administration to reduce digital trade barriers between the two allies.

Democratic Congressman Joe Courtney, who co-chairs the Friends of Australia Caucus, told The Age and Sydney Morning Herald this week the Trump administration’s “sudden, abrupt departure” from the Trans Pacific Partnership had “created a real vulnerability for the US and its allies in that part of the world.” 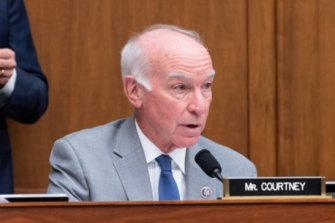 In their letter, caucus members noted that the absence of a clear agreement had made international transactions unnecessarily difficult, even for smaller scale transactions. In the aftermath of the 2020 Australian bushfires, for example, US citizens who wanted to donate by credit card to Australian charities could not do so because of the digital barriers between the two countries.

“I think it’s very important that we take common sense, but tangible, steps to show that we really are willing to reconnect with within the Pacific region in terms of trade, which is to everybody’s benefit,” Courtney said this week.

“Particularly with COVID, the need to have a stable safe system of digital trade is even more pronounced.”