Home » World News » Vaccine distribution is about to begin in the virus-ravaged U.S.

The first of nearly three million doses of the first Covid-19 vaccine were packed in dry ice and put on trucks at a Pfizer plant in Kalamazoo, Mich., on Sunday morning, destined for hundreds of distribution centers in all 50 states, the most ambitious vaccination campaign in American history.

Workers applauded as the first truck left the plant carrying a load of the vaccine.

The inoculation effort, set in motion after the Food and Drug Administration’s emergency authorization on Friday night of the vaccine developed by Pfizer and BioNTech, comes as the U.S. coronavirus death toll approaches 300,000. And it is happening amid fears that Americans will continue to crowd together indoors over the holiday season and accelerate surges in cases, hospitalizations and deaths.

Officials reported more than 207,000 new cases and more than 2,200 deaths on Saturday. That brought the total number of U.S. cases to more than 16 million, by far the most in the world, less than a week after the country surpassed 15 million. More than 3,000 deaths were reported for the first time on Wednesday.

The first injections are expected to be given by Monday to high-risk health care workers, the initial step toward the goal of inoculating enough people by spring to finally halt the spread of a virus that has sickened millions and upended the country’s economy, education system and daily life.

UPS and FedEx said plans to ship the vaccine were already underway on Saturday, with vials of vaccines packed at Pfizer facilities and prepared for shipping. Employees from the Centers for Disease Control and Prevention were on hand to make sure there were no mishaps, according to a senior C.D.C. official.

About 2.9 million doses of the vaccine are to travel by plane and guarded truck from Pfizer facilities in Michigan and Wisconsin to designated distribution locations, mostly hospitals. Gen. Gustave F. Perna, the chief operating officer of Operation Warp Speed, the federal effort to bring a vaccine to market, said that 145 sites would receive the vaccine on Monday, 425 on Tuesday and 66 on Wednesday. He likened the operation to the Allied invasion of Europe in World War II.

“D-Day was the beginning of the end, and that’s where we are today,” he said, cautioning it would still take months “to eventually achieve victory.”

States are largely planning to follow C.D.C. recommendations about who gets vaccinated first: health care workers at high risk of exposure and residents of nursing homes and other long-term care facilities, a population that has died from the virus at disproportionately high rates.

FedEx and UPS will transport the vaccine throughout most of the country, and each delivery will be followed by shipments of extra dry ice a day later. Pfizer designed special containers, with trackers and enough dry ice to keep the doses sufficiently cold for up to 10 days. Every truck carrying the containers will have a device that tracks its location, temperature, light exposure and motion.

The rapid development of the vaccine, and its authorization based on data showing it to be 95 percent effective, has been a triumph of medical science, but much in this complicated next stage could go wrong.

The Pfizer vaccine needs to be kept at minus 94 degrees Fahrenheit, and the special boxes it is being shipped in can be opened no more than twice a day, to maintain the deep freeze. Side effects, like achiness or headache, could cause some of the nurses, doctors and others who are first in line for the vaccine to miss a day or two of work, challenging overburdened hospitals.

Rollout of the Pfizer vaccine is also less centralized in the United States than in other countries that are racing to distribute it. (In Britain, the process is very centralized, and in Canada, it is somewhere in between.)

States say they have only a fraction of the funding they need from the federal government for staffing to administer the shot, for tracking who has received both doses of the vaccine — a booster is needed three weeks after the initial injection — and for other crucial pieces of the effort.

Additional vaccines are in the pipeline. Moderna recently applied for emergency authorization for its vaccine and said it was “on track” to produce 20 million doses by the end of this month and between 500 million and a billion through 2021. 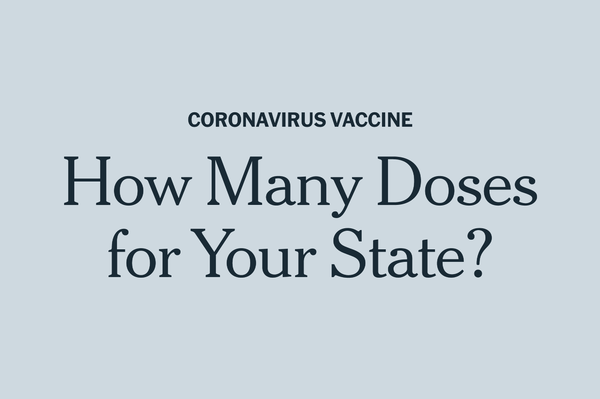 How Many Vaccine Doses Will Your State Get?

The New York Times surveyed all 50 states for their estimates of coronavirus vaccine doses they expect to receive before the end of the year.

A cruise ship returns to Singapore early after a passenger tests positive.