Singapore: An investigation into mass extrajudicial killings committed by the Myanmar military has verified seven incidents in which a total of more than 100 people, mostly civilians, died including one case where dozens were ordered to run before soldiers shot them.

The massacres are documented in a new report released in the lead-up to a key conference in Phnom Penh to be attended by world leaders including Prime Minister Anthony Albanese and US President Joe Biden. 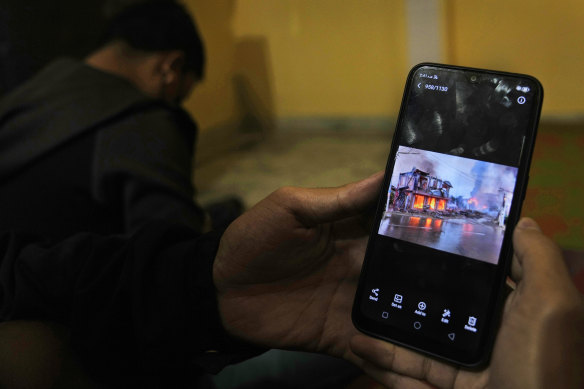 A Myanmar refugee who fled the violence shows a photo of it on their phone in India.Credit:AP

The ASEAN-related meetings are the first of a trio of summits in south-east Asia next week. The G20 will follow in Bali from next Tuesday, before leaders converge on Bangkok for the Asia-Pacific Economic Co-operation event.

And while Russia’s war in Ukraine and other geopolitical flash points are poised to dominate talks in Indonesia and Thailand, the relentless violence in post-coup Myanmar is expected to be high on the agenda in the Cambodian capital this weekend.

Armed with Russian fighter jets and helicopters, the military junta has sought to put down a growing resistance movement with a brutal campaign of airstrikes and burning villages.

The report by Myanmar Witness, an investigative group funded by the Australian and British governments that probes human rights abuses in the strife-torn nation, catalogues a series of mass slayings in the 12 months to September. It says it has fully verified six of the seven incidents, using techniques such as geolocation and chrono-location of video footage, NASA technology and satellite imagery, as well as multiple eyewitness accounts, and partially verified the other. 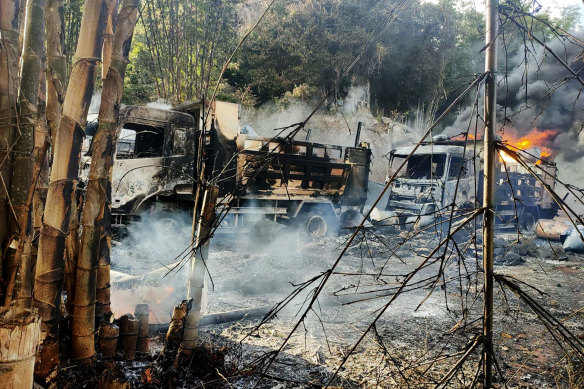 Thirty-five people were killed when they were pulled from their vehicles, shot and set on fire in Hpruso, Kayah state in the most high profile of the massacres last Christmas Eve.Credit:Karenni Nationalities Defense Force

More than 100 people, almost all civilians, mostly unarmed and 20 under the age of 18, were rounded up and executed in military raids in the incidents documented in the report.

The killings, which Myanmar Witness describes as the tip of the iceberg, were reported by local media but only the most high-profile of them – a Christmas Eve massacre in Hpruso, Kayah state — made international headlines. Thirty-five people were pulled from their vehicles, shot and set on fire that day.

In another atrocity, 37 villagers were detained in a monastery in Mon Taing Pin, a small settlement in Myanmar’s north-west Sagaing region, and beaten and murdered, before their bodies were placed in houses that were set ablaze in May.

In December last year, 11 villagers were reported to have been burnt alive in Don Taw, also in the Sagaing region, during a junta raid. 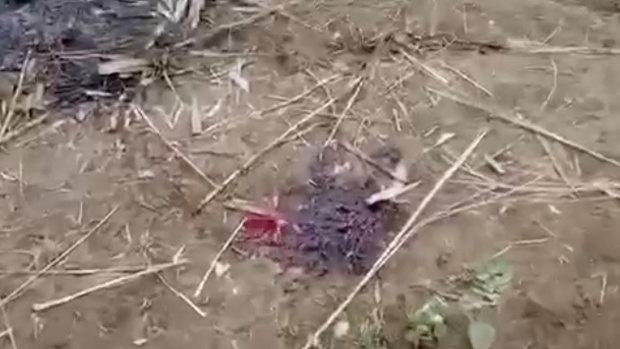 A bloodstain is seen on the ground near charred corpses in Don Taw village in Sagaing, Myanmar, in December 2021. Credit:AP

In a further killing in January in Loikaw, a city in eastern Kayah state, six internally displaced people, four of them under 18, were beaten, shot and their bodies dumped into an outdoor toilet pit, according to the report.

And in yet another massacre investigated by the group, in Sagaing’s Myinmu township, six displaced people were slaughtered in June when members of the military made them and two dozen others run from a pagoda compound where they had been sheltering towards a local monastery, picking them off by shooting them in the head and back.

The report doesn’t include indiscriminate killings from military airstrikes, such as the horrific attack from above on a music festival in northern Kachin state last month that left as many as 80 concert-goers dead or the bombing by army helicopters of a school in the Sagaing region in September in which at least 11 children lost their lives. 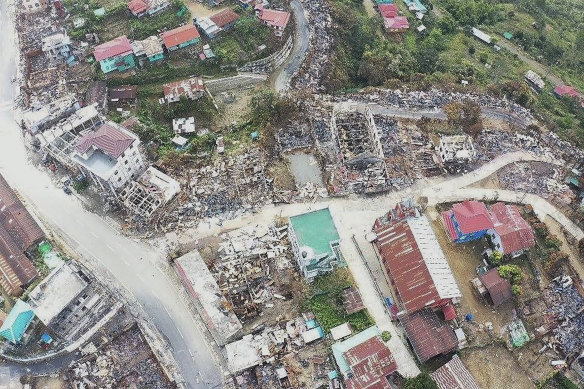 More than 2400 people have been killed since the military seized power in a coup in February last year and imprisoned the country’s political leaders, according to human rights group the Assistance Association for Political Prisoners. It reports a further 16,000 people have been arrested and 13,000 are still detained.

“The brutality is certainly getting worse,” said Chris Sidoti, a former United Nations investigator into crimes against humanity in Myanmar. 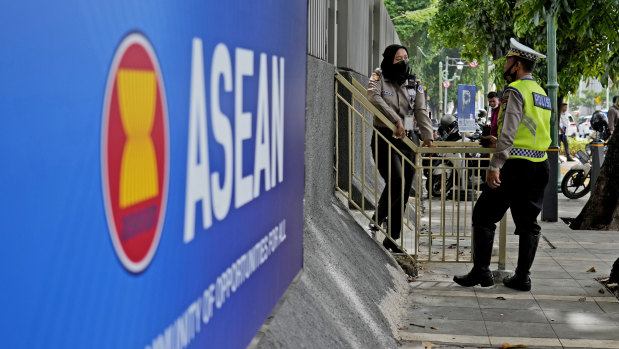 There is growing impatience from ASEAN member states at the junta’s failure to adhere to its peace plan.Credit:AP

“We’ve seen that in the bombings of schools, in the attack on that concert which resulted in possibly 80 people being killed. There’s been some horrendous violence and it is worsening.”

The United States, European Union and the United Kingdom have imposed sanctions against the military regime since it seized power but it has been left to ASEAN, the group of 10 south-east Asian nations, to try to broker a solution to the crisis.

As leaders head to Phnom Penh, there is increasing frustration at the lack of progress.

Professor Thitinan Pongsudhirak, director of the Institute of Security and International Studies at Bangkok’s Chulalongkorn University, said divisions between ASEAN nations over Myanmar, Russia’s war in Ukraine and the US-China rivalry were undermining the role of the regional bloc. 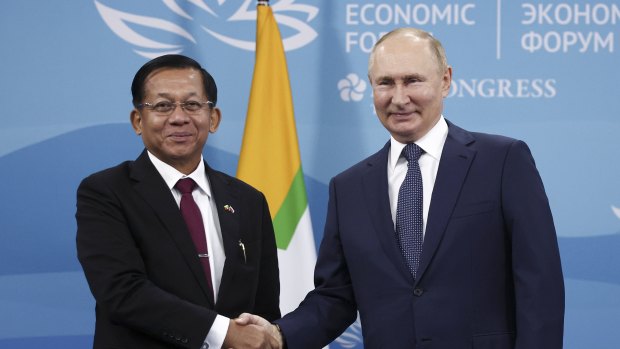 “I see ASEAN as a bridge, a buffer and a broker but that role is being eroded by these larger forces in play,” he said at an event at the Foreign Correspondents’ Club of Thailand.

Growing more impatient at the Myanmar military’s failure to adhere to the terms of its five-point peace plan, ASEAN’s other nine member states will consider their options on Cambodia. Junta leader Min Aung Hlaing, however, won’t be present, having been suspended from meetings along with his foreign minister.

Malaysia, which has taken the toughest line on Myanmar of any country in the region, is pushing for that ban to be extended to all ministerial meetings.

As the bloodshed persists, Aaron Connelly, senior fellow for south-east Asian politics and foreign policy at the International Institute for Strategic Studies, believes ASEAN still has an important part to play.

“The most useful role that ASEAN can play in resolving the crisis is de-legitimising the junta by not seating it at ASEAN meetings. That has consequences for the broader international community, which looks to ASEAN for cues on how to deal with the conflict in Myanmar. But it also has consequences inside the country,” he said.

“Min Aung Hlaing used the junta’s earlier participation in ASEAN meetings to try to demonstrate to his own people, through state-run, media, that he had international legitimacy. The message was, ‘the rest of the world has already accepted me, so you should too’.

“ASEAN’s rejection of the junta bolsters the position of the resistance—and to those inside the regime who might argue for a less brutal approach to opposition, or even for a change in leadership.”