Sarah Krieg was looking forward to celebrating Easter with her Brisbane-based parents after missing out last year when COVID-19 forced lockdowns and border closures.

But her family’s Easter plans have been dashed for a second time by Victoria’s decision to shut the state’s border to Greater Brisbane on Monday afternoon, leaving her parents stuck in the northern capital, unable to join their children in Melbourne at the weekend. 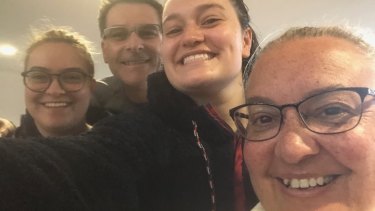 Sarah Krieg, third from left, with, from left, her sibling Ems and parents Michael and Michelle in Albury in July last year before the NSW-Victorian border was shut.

Ms Krieg, who works and lives in Albury-Wodonga, said she “had no idea what was going to happen” when cases in her parent’s home city of Brisbane started popping up late last week.

“Everything was looking fantastic until last Friday,” she said.

And after the chaos of last year, Ms Krieg was not surprised that her Easter plans fell through again at the last minute.

After four new local cases were reported overnight, Queensland Premier Annastacia Palaszczuk made the decision to send the state’s capital into a three-day snap lockdown.

But there was still some hope for travellers such as Alison McGurk, who was keeping positive that a plan to spend nine days on the Sunshine Coast with her two children in late April would go ahead.

The trip had been in the works for more than a year, with Ms McGurk, the house supervisor at disability support service, Life Without Barriers, keen to spend some time with her family and see her best friend for the first time in a year.

“This is the first time I’ve been able to afford a holiday and will be the first real holiday my kids have ever been on,” she said.

But Ms McGurk was also thankful that strong COVID-19 safety measures across the country had kept cases relatively low compared with countries with surging cases.

“It’s disappointing that this may affect our holiday but in the grand scheme of things I’m not living in America and people aren’t dropping like flies,” she said.

Victorian residents who want to come home will need to apply for a permit then complete a 14-day quarantine.

Non-Victorian residents entering from Brisbane will need an exception, specified worker permit, transit permit, freight worker permit or exemption to be allowed into the state.

US disaster victims put at risk of identity theft

Why was Peppa Pig and Fireman Sam accused of sexism by London Fire Brigade?