The last of four teenage paddleboarders who survived a night being washed across Port Phillip Bay has been released from hospital, as the families discuss ways to thank the rescuers who raised the alarm and helped find their missing children. 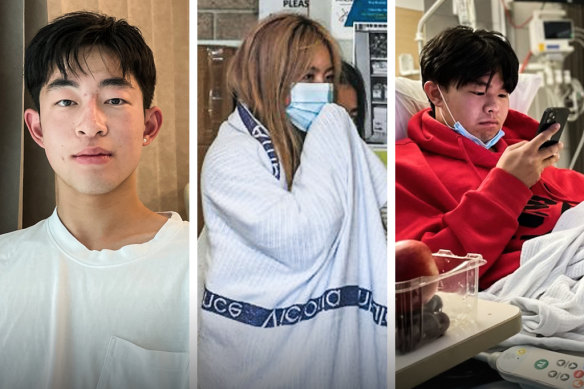 Rong Shi, Shirui Zheng and Lee Li were three of the four paddleboarders who floated from Rosebud to Swan Island.

The Glen Iris teen was one of four Melbourne students swept from the shore of Rosebud on Monday evening, soon after they launched two inflatable paddleboards. The friends – all inexperienced swimmers and none wearing lifejackets – had been celebrating their VCE results.

They were found on Swan Island 12 hours later, after drifting across shipping channels and deep water, more than 20 kilometres away.

Jack Shi said on Thursday his son was “a bit tired but in good shape, the doctor said to let him go back home”.

Shi said Rong was kept in hospital longer than his three friends after doctors had concerns about his blood test results.

“Because of fatigue and exhaustion there was an indicator in the blood but nothing severe,” he said.

“Yesterday he was very, very tired and today I think he’s just trying to get as much rest as he can and then do another blood test and make sure the indicators are back to normal.”

As the dust settles on their group’s ordeal, Shi said the families were starting to think of ways to say thank you to everyone who helped find the group.

“Especially the one who called the police [after finding belongings on the beach] and the gentleman who found them [on Swan Island] who requested help for them,” he said.

“We want to do something to show how appreciative we are”.

Rong’s girlfriend Shirui Zheng, 18, was among the teens washed across the bay. She returned to the hospital on Wednesday afternoon, bringing doughnuts to her boyfriend.

Zheng said she was thinking only of her mother as the scared teens slowly crossed shipping channels on their mammoth night journey. The pair had argued the day before.

“I just wanted to go home and apologise to her,” she said. “I was scared that she would be mad at me but she wasn’t, so that’s a relief.”

She said the group had been pushed away from the shore by strong winds soon after they launched their two paddleboards. A passerby found their belongings on the beach and reported them missing just after 8pm.

“The wind [was] too big and before we realised we were already too far from the beach. But then I guess we just stayed calm and worked together,” she said. “I really trust my friends and we were … comforting each other.”

Zheng said she had “never been that cold before” and the journey had been “pretty scary”, but there were also stars in the sky and “shining little fish in the sea”.

Zheng, Shi and their friends Minghao “Lee” Li, 18, and Sally Liu, 19, were all still recovering after what Li described as a “cold, horrible” journey across the bay.