Victoria has recorded 44,155 COVID-19 cases and four deaths on Sunday after a number of Melburnians who were stuck in isolation waiting for a PCR test result were told their samples were “no longer suitable” to be analysed.

In total 22,051 rapid test-confirmed cases were reported and 22,104 were diagnosed using PCR tests. The Department of Health did not disclose how many of the rapid test positive cases were discovered earlier in the week but only registered yesterday.

There are 752 people across the state in hospital with the virus, with 23 on a ventilator and 104 in intensive care.

Victoria’s case numbers on Sunday were higher than those in NSW for the second day in a row, with NSW recording 30,062 cases. However, NSW reported its deadliest day since the pandemic started, with 16 deaths from the virus, with 1927 people in hospital with COVID-19 in that state.

Private clinic Melbourne Pathology, which closed its PCR testing sites to the public earlier this week to deal with a backlog, sent text messages on Saturday informing test patients their samples could not be processed. 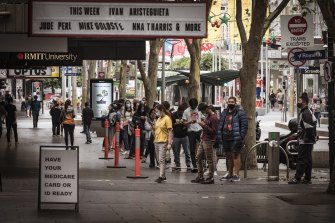 “Your COVID-19 PCR sample is no longer suitable to be tested and no result can be provided,” the text messages said. “If currently symptomatic, assume you are positive and arrange rapid antigen or repeat PCR swab confirmation as appropriate.”

In a statement, the Department of Health confirmed some tests could not be processed because of the volume of PCR swabs received across the state.

Melbourne Pathology was one of four private pathology labs which closed its testing centres from Tuesday, along with 4Cyte, ACL and Dorevitch, to process a backlog of tests. The providers run a total of 54 testing sites in Victoria, with 4Cyte accounting for 41.

Victoria now has 146,863 active cases, with more than 83,993 PCR test results were returned across Saturday.

Around 16 per cent of Victorians have received a third dose of a COVID-19 vaccine.

As Victoria’s COVID-19 situation deteriorates, surf lifesavers, students and other volunteers are filling hundreds of paramedic shifts every week in Victoria in a crisis measure to deliver emergency care.

According to a source close to Ambulance Victoria, ambulance response times are the worst they have ever been, with fewer than 70 per cent of code one emergencies being responded to within 15 minutes, and paramedics are commonly spending five hours or more waiting with patients at overrun emergency departments.

While the service is dealing with record COVID-19 cases, the source, who was not authorised to speak publicly, said the approximately 1900 emergency calls being received each day was not unusual, and worsening response times were mostly driven by staff shortages across the health system.

They said some large Melbourne metropolitan hospitals were seeing average transfer times between the ambulance staff and the hospital of 70 minutes, and that paid and unpaid students and volunteers have at times made up almost half the Melbourne ambulance staff working overnight.

Life is full of risks, so surely it’s time we got back to ‘normal life’ already