Victoria has recorded three deaths and 7172 new cases in the 24 hours to Sunday morning as experts continue to see Omicron become the dominant strain of the COVID-19 pandemic.

Hospitalisations were at 472, with 98 people in intensive care and 22 on ventilators while the seven-day hospitalisation average is at 424.

Victoria set a daily record on Saturday with 7442 new cases. 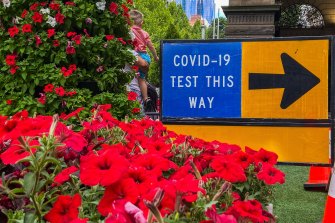 The COVID-19 testing queues have continued into the new year, with lines outside Melbourne’s Town Hall on Saturday.Credit:Joe Armao

Victorian officials will hope to keep more testing facilities open on Sunday and Monday with temperatures expected to dip back to the mid to high 20s after Saturday was Melbourne’s hottest New Year’s Day since 2008.

New data from more than a million COVID-19 cases in the UK has found the risk of hospitalisation due to Omicron was a third of the rate of the previously dominant Delta variant.

But with Omicron circulating primarily among the young and a known lag between when people test positive and fall sick, Kirby Institute epidemiologist John Kaldor says it too early to confidently say how big the surge in Australian hospitalisations might be.

“We are still probably a few weeks out from knowing how this is going to unfold,” he said.

Public health officials say a big proportion of cases is likely going undetected, and Professor Kaldor said it would not be too wild a guess to suggest there at least were three to five times as many cases as officially notified.

Iran says it will continue missile tests after U.S. allegation

No, GOP’s gerrymandering edge is not a threat to democracy