Victoria has recorded three new locally acquired cases of coronavirus and one in an international traveller. There are now 36 active cases across the state.

Today's results come from more than 32,000 tests on Sunday. Testing resumed at some sites at 8am today. 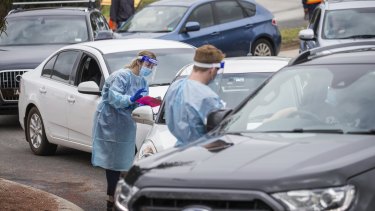 Thousands of nurses and midwives have been asked to urgently fill shifts at coronavirus testing sites amid long queues and closures at some locations on Sunday.

The state’s health authorities conceded they were unable to “flick a switch” to immediately restore testing capacity at clinics, with many weary staff taking a holiday as 60,000 Victorians rushed home from NSW and required a test.

While 13 drive-through testing sites had their hours extended to at least 8am to 8pm, there were still waits of up to four hours across some centres on the weekend.

Grattan Institute's health program director Stephen Duckett said a target to get zero cases in Victoria by mid-January was "achievable", while suggestions we'd be at zero by this weekend might be off the mark.

He said ultimately there were just "so many who came forward" to get tested after being in NSW that testing centres got unsurprisingly inundated.

"(People) responded to the call and lined up for hours in many cases and the testing capacity was overwhelmed. That's not a good sign," he told 3AW Breakfast.

"There's only a handful of cases and we know the places they came from. Admittedly there are more and more [exposure sites] being found."

It would be worrying if new daily case numbers returned to double digits, he said. "But it's also about the mystery cases. Any mystery cases where we don't know where they came from, then that is something we should worry about."

On Sunday, the Black Rock Thai restaurant cluster rose to 21 connected cases. But in a promising sign that the outbreak can be contained, there have been no mystery cases in Victoria to date and more than 500 primary and secondary close contacts of the cluster have been identified.

Royal Australian College of General Practitioners president Karen Price was concerned pregnant women, young children and those with a disability would struggle to queue for hours if testing delays continued.

“I feel for our leaders, but clearly it isn’t satisfactory,” Dr Price said.

Premier Daniel Andrews, who has been on leave, tweeted on Monday morning that the new cases were not what Victorians were hoping for, but that the virus was never going to just go away.