Victorian prosecutors have lashed the Court of Appeal for its “troubling application” of consent laws, which they say is making it more difficult to prove the crime of rape.

The Office of Public Prosecutions’ criticism comes off the back of a Court of Appeal decision to overturn a rape conviction against a man who was accused of assaulting a woman while she slept. 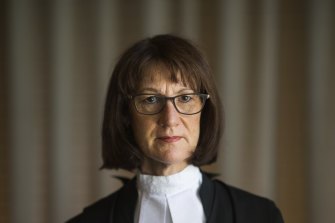 Victims of Crime Commissioner Fiona McCormack has called for what she referred to as a gap in law to be urgently addressed.

“What does it say about us as a community that a court of law could accept that someone can consent while they’re unconscious?”

The issue of consent is being scrutinised in the wake of several high-profile cases, including the alleged rape of Liberal staffer Brittany Higgins. There is also a groundswell of high school students calling for better sex education after detailing disturbing accounts of sexual assault.

The Victorian Law Reform Commission is examining how to improve the justice system’s response to sexual offending in Victoria. 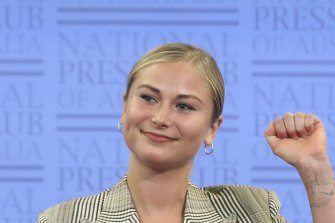 2021 Australian of the Year Grace Tame, pictured here at the National Press Club, has called for a national standard for consent. Credit:Alex Ellinghausen

The Office of Public Prosecutions said in a submission to the inquiry that the courts appeared to be applying a low bar for the communication of consent and it was affecting prosecutions.

Victoria’s laws are based on a model of communicative consent, which according to the Law Reform Commission, requires that consensual sex should only take place where there has been communication and agreement between parties.

Last November, the Court of Appeal overturned a rape conviction against a Melbourne man who said the woman he was accused of assaulting had, to his mind, consented to sex because she responded to his touching.

The woman told the court she had been asleep and initially thought it was her partner. It wasn’t until she opened her eyes that she realised it was another man and put a stop to the incident.

Despite the court accepting her evidence was credible, the Court of Appeal decided prosecutors couldn’t exclude the reasonable possibility the accused believed the woman was awake and consented to his advances.

The OPP described the court’s decision as a “troubling application” of the model of communicative consent and not in the spirit of Victorian laws.

“It renders the not-uncommon situation of a heavily intoxicated complainant being penetrated by an acquaintance or stranger very difficult to prosecute,” the OPP said.

Victorian Victims of Crime Commissioner Fiona McCormack said it was extremely concerning that the law could be interpreted to suggest someone who is not conscious can provide consent.

“There is a long history of blaming victims of sexual assault in our community and assuming consent on the basis of what victims did or didn’t do,” she said. ”It’s time to start focusing on the actions of the accused and the extent to which they have sought unequivocal consent.”

University of Melbourne criminologist Bianca Fileborn said the law did not require an accused person to show they took tangible steps to ascertain whether they had consent.

She said this was out of step with how consent was defined, and it was setting a low bar when a jury or court accepted an accused had a reasonable belief they had consent because someone made a sound or moved.

Dr Fileborn said the definition for consent should be expanded to make it clearer it was ongoing and must be enthusiastically expressed.

But the Criminal Bar Association submitted the communicative consent model was working as it should, with judges able to give juries significant directions about what does and doesn’t constitute consent.

The Law Institute of Victoria also said the model was consistent with modern understandings of lack of consent and did not require proof that a complainant physically resisted a sexual act.

Several submissions to the inquiry called for greater education around sexual consent to prevent offending from happening in the first place.

Victoria Legal Aid said its lawyers had observed young people accused of sexual offending were often unaware of the law in relation to the definition and age of consent, and what sexual behaviour constituted a criminal offence.

“As some children also become sexually active at a younger age than others, it is important to ensure that education on issues of sex and the law are delivered early enough to prevent inadvertent offending,” it said.

Victoria Legal Aid also said there was a widespread perception in the community that image-based sexual abuse was not criminal, which also needed to be addressed.

The County Court said in its submission new offences may be required to include conduct not covered by existing laws, including criminalising the creation of “deepfakes” (fake pornography), stealthing (removing a condom during sex without consent) and an offence for depositing semen in items of clothing.

If you or anyone you know needs support, you can contact the National Sexual Assault, Domestic and Family Violence Counselling Service on 1800RESPECT (1800 737 732).