The clashes erupted in Baghdad after powerful Shi’ite cleric Moqtada al-Sadr announced he was quitting politics – a decision he said was in response to the failure of other Shi’ite leaders and parties to reform a corrupt and decaying governing system.

Sadr derives power from his ability to mobilise and control his large grassroots following, but with his stated exit from politics, he has implicitly given them the freedom to act as they see fit.

Shortly after Sadr made the announcement on Monday, his loyalists stormed the government’s Republican Palace, once a palace of dictator Saddam Hussein, and initially jumped into a swimming pool while cheering and waving flags.

But the initial celebrations turned to violence, with Sadr’s supporters clashing with rival Shi’ite factions backed by neighbouring Iran.

As night fell, machine-gun fire and explosions rang out, with tracer fire rising into the sky above the Green Zone that houses government headquarters and foreign embassies, in the worst fighting the Iraqi capital has seen in years.

On Tuesday, supporters of Sadr fired rocket-propelled grenades into Iraq’s Green Zone, where it appeared Iraqi security forces were firing back at them. 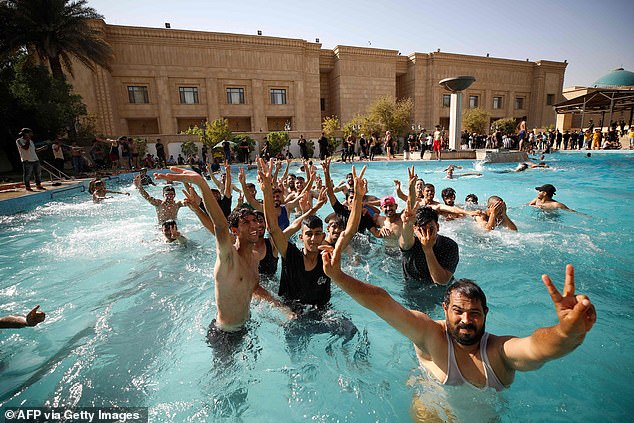 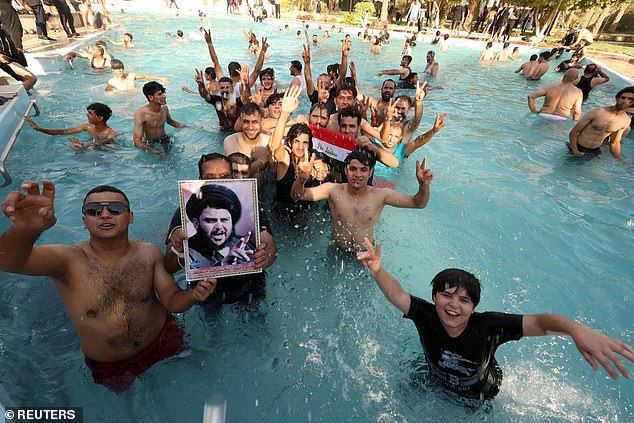 Shortly after Sadr made the announcement on Monday, his loyalists stormed the government’s Republican Palace, once a palace of dictator Saddam Hussein, and initially jumped into a swimming pool while cheering and waving flags 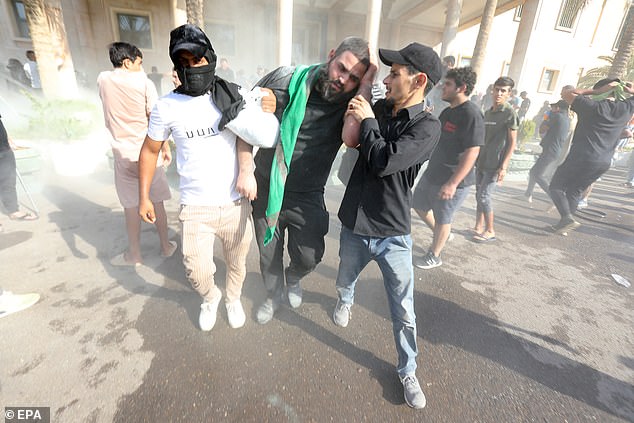 But the initial celebrations turned to violence, with Sadr’s supporters clashing with rival Shi’ite factions backed by neighbouring Iran. Pictured: Supporters of Sadr help injured protesters during the clashes outside the government palace on Monday 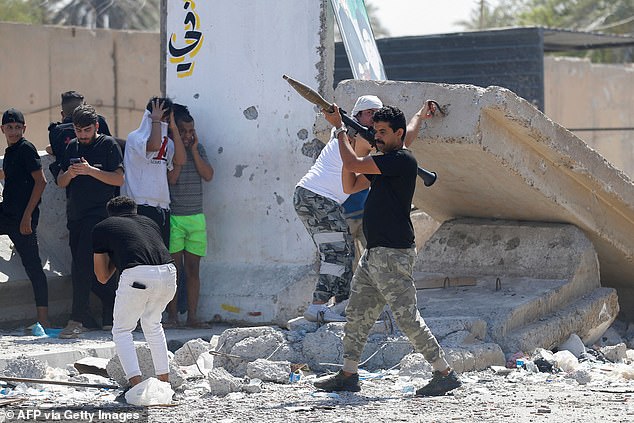 At least seven shells fell in the high-security Green Zone on Monday night, a security source said on condition of anonymity, but it was not immediately clear who was responsible.

After a lull in violence, fresh clashes between Sadr’s supporters and the army and men of the Hashed al-Shaabi, former Tehran-backed paramilitaries integrated into the Iraqi forces, erupted again on Tuesday morning.

The rattle of automatic gunfire and heavier explosions of rocket-propelled grenades could be heard from the Green Zone, AFP correspondents reported.

Tensions have soared in Iraq amid a political crisis that has left the country without a new government, prime minister or president for months, and escalated sharply after Sadr’s supporters on Monday afternoon stormed the government palace following their leader’s announcement that he was quitting politics.

The violence has sent Iraq spiralling into yet another round of violence as it struggles to recover from decades of war, sanctions, civil strife and endemic corruption.

The latest round of violence pits Sadr’s supporters, which include a heavily armed militia, against Iran-aligned rival paramilitaries and the security forces.

The United Nations mission in Iraq warned of ‘an extremely dangerous escalation’ and called on all sides to ‘refrain from acts that could lead to an unstoppable chain of events’.

‘The very survival of the state is at stake,’ it warned.

But amid an army-imposed nationwide curfew that continued Tuesday, Baghdad was otherwise quiet, with shops shuttered and few cars venturing out on the streets.

On Tuesday morning, medics updated the toll of Sadr supporters killed to 23, with some 380 others injured – some with bullet wounds and others suffering tear gas inhalation.

Witnesses said earlier that Sadr loyalists and supporters of a rival Shiite bloc, the pro-Iran Coordination Framework, had exchanged fire. 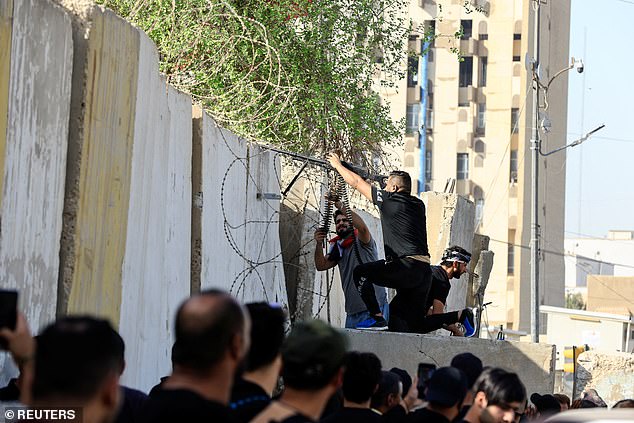 Sadr’s supporters fire their weapons during clashes with the Iraqi security forces near the Green Zone, in Baghdad, on Tuesday 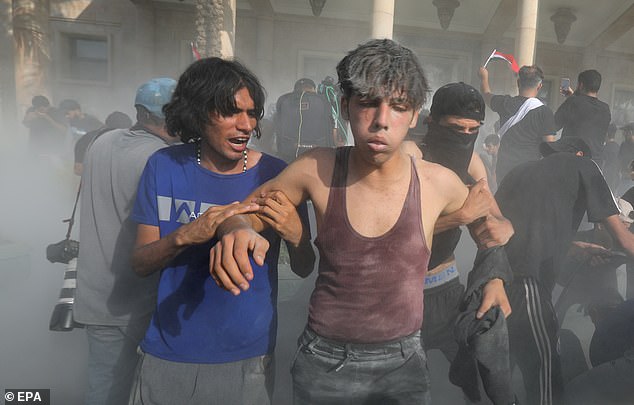 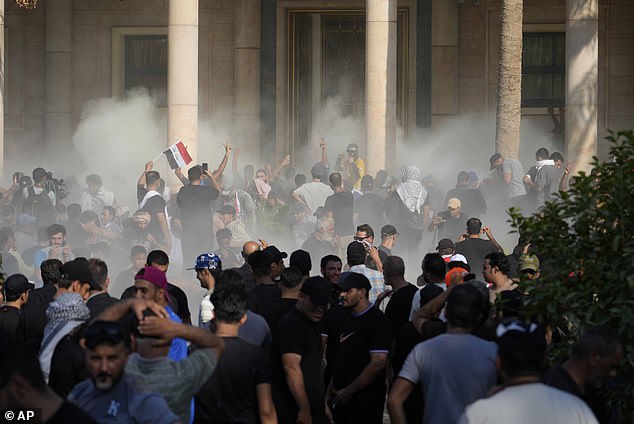 The Framework condemned an ‘attack on state institutions’, urging the Sadrists to engage in ‘dialogue’.

The United States also urged calm amid the ‘disturbing’ reports, while France called on ‘the parties to exercise the utmost restraint’.

Sadr’s win in an October election, his attempts to form a government free of Iran-backed groups, and his eventual withdrawal from parliament in favour of street protests and occupying government buildings to block political activity have all featured in the build-up of tensions that finally erupted into new violence on Monday.

‘I’ve decided not to meddle in political affairs. I therefore announce now my definitive retirement,’ said Sadr, a longtime player in the war-torn country’s political scene, though he himself has never directly been in government.

Shortly after he made his announcement to quit, Sadr’s followers who had been occupying the parliament building for weeks then burst into the Republican Palace in Baghdad – where cabinet meetings are usually held – and initially celebrated including by cooling off in a swimming pool in the garden. 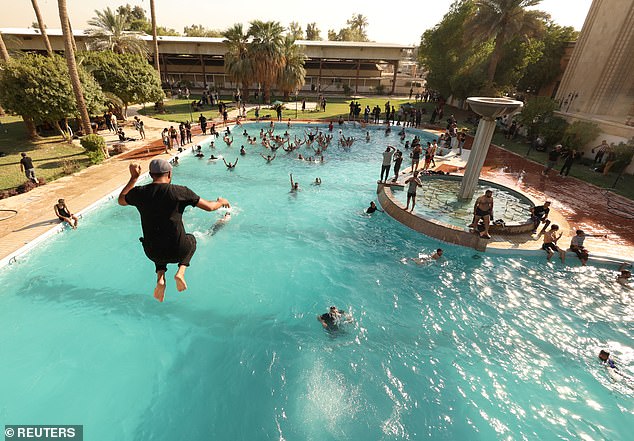 Shortly after he made his announcement to quit, Sadr’s followers who had been occupying the parliament building for weeks then burst into the Republican Palace in Baghdad where they enjoyed a pool party 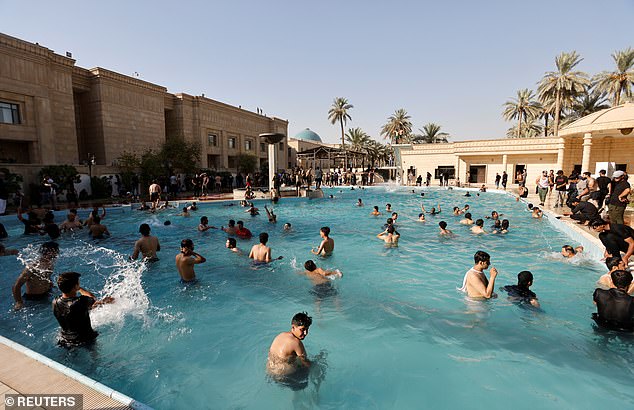 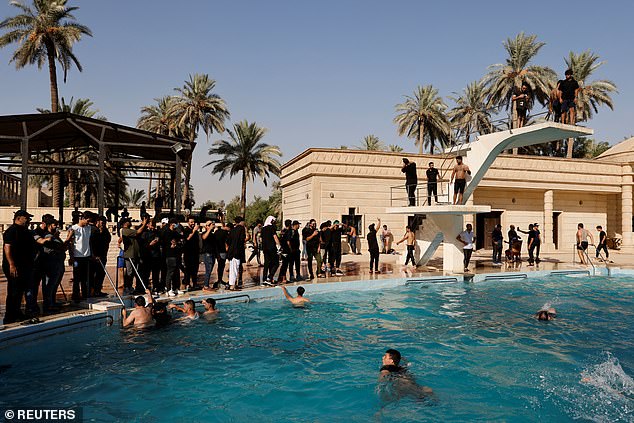 Clashes then took place between young men loyal to Sadr and supporters of the pro-Iran militias, who threw stones at each other near the Green Zone, before the nighttime armed fighting.

Sadr later said he was staging a hunger strike in protest against the use of weapons by all sides.

It comes two days after Sadr said ‘all parties’ including his own should give up government positions in order to help resolve the political crisis.

His bloc emerged from last year’s election as the biggest in the legislature, with 73 seats, but short of a majority.

In June, his lawmakers quit in a bid to break the logjam, which led to the Coordination Framework becoming the largest bloc.

Hamzeh Hadad, from the European Council on Foreign Relations, said it was ‘not clear’ what Sadr’s strategy was.

‘Whatever it does mean, in typical Sadrist fashion, there is always backtracking expected,’ Hadad said.

‘The second, and more terrifying thought on this is that he is giving his followers the green light to do whatever they like.’ 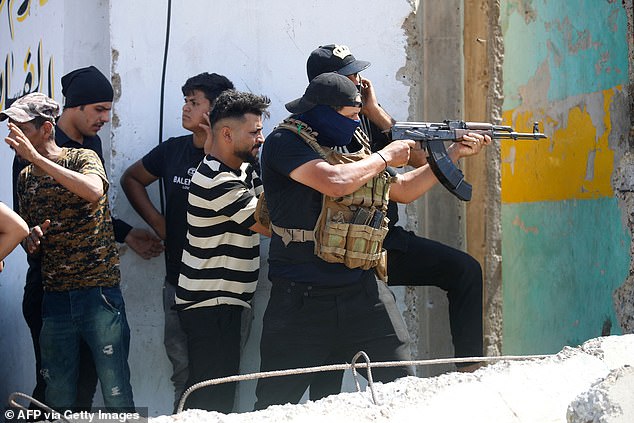 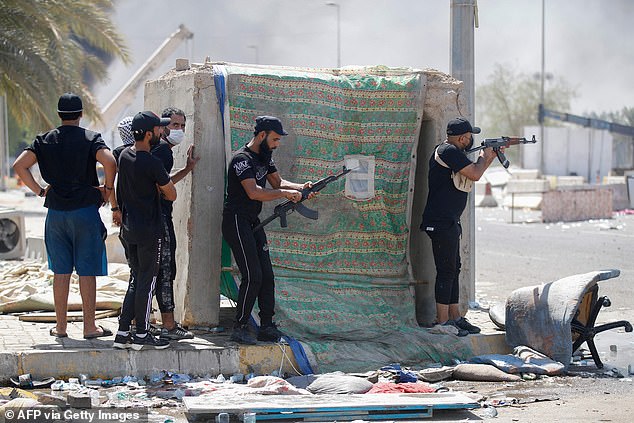 Iraq has been mired in political deadlock since legislative elections in October last year due to disagreement between Shiite factions over forming a coalition.

Sadr’s supporters have for weeks been staging a sit-in outside Iraq’s parliament, after storming the legislature’s interior on July 30 to press their demands.

The Coordination Framework wants a new head of government to be appointed before any new polls are held.

Sadr, who has drawn broad support by opposing both U.S. and Iranian influence on Iraqi politics, was the biggest winner from an October election but withdrew all his lawmakers from parliament in June after he failed to form a government that excluded his rivals, mostly Tehran-backed Shi’ite parties.

Sadr has insisted on early elections and the dissolution of parliament. He says no politician who has been in power since the U.S. invasion in 2003 should hold office.

Many Iraqis worry that moves by each Shi’ite camp could lead to new civil conflict.

‘The (Iran) loyalists came and burned the tents of Sadrists, and attacked protesters,’ said Kadhim Haitham, a supporter of Sadr.

Pro-Iran groups blamed the Sadrists for the clashes and denied having shot at anyone. ‘It’s not true – if our people had guns why would they need to throw rocks?’ said one militia member, who declined to be identified by name.

Sadr has withdrawn from politics and the government in the past and has also disbanded militias loyal to him. But he retains widespread influence over state institutions and controls a paramilitary group with thousands of members.

He has often returned to political activity after similar announcements, although the current deadlock appears harder to resolve than previous periods of dysfunction and has given Iraq its longest run without a government.

Supporters of the mercurial cleric first stormed the Green Zone in July. Since then, they have occupied parliament, halting the process to choose a new president and prime minister. 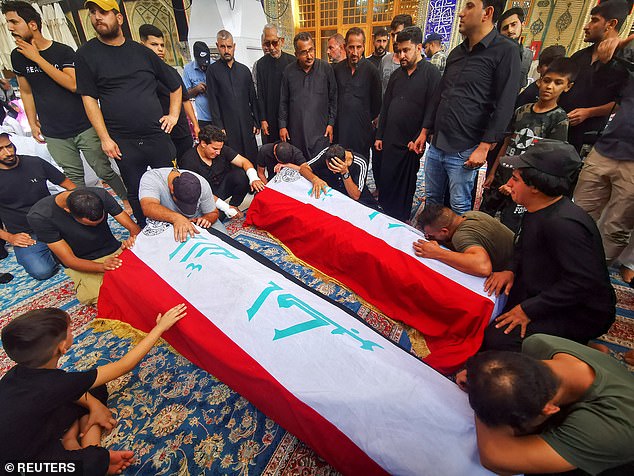 Mourners pray in front of the coffins of supporters of Iraqi populist leader Moqtada al-Sadr, who were killed during clashes in Baghdad, during their funeral in Najaf, Iraq, on Tuesday

Iraq, OPEC’s second-largest producer, has struggled to recover since the defeat of Islamic State in 2017 because political parties have squabbled over power and its vast oil wealth.

Following the clashes, Iran has now closed its borders with Iraq and urged its citizens to avoid travelling there, a senior official said on Tuesday.

Millions of Iranians travel to the Iraqi city of Kerbala every year for the ritual of Arbaeen, which marks the end of a 40-day mourning period for the grandson of the Prophet Mohammad, Imam Hussein. Arbaeen falls on Sept. 16-17 this year.

‘The border with Iraq has been closed. Due to safety concerns, it is necessary for Iranians to refrain from travelling to Iraq until further notice,’ state TV quoted Iran’s deputy Interior Minister Majid Mirahmadi as saying.

State TV said Iran had halted all flights to Iraq ‘until further notice because of the ongoing unrest’.

‘We are trying to arrange an emergency flight to bring back Iranians from Iraq and Baghdad who are currently at the airport. We hope to evacuate them today,’ state TV cited a senior aviation authority as saying.