Mr McGowan said life would become very difficult for people who were unvaccinated from January 31, when the new rules took effect.

Mr McGowan said he expected the new rules to be in place for years.

Roadhouses, service stations and getting takeaway food will be exempt.

“If you go and get vaccinated today, you can have your second dose by only February,” Mr McGowan said.

“We have seen what works in other jurisdictions. These will be the broadest proof-of-vaccination requirements in the nation, and they will not be removed anytime soon.”

Proof of vaccination will also be required at indoor entertainment venues including gaming centres, theatres and museums. 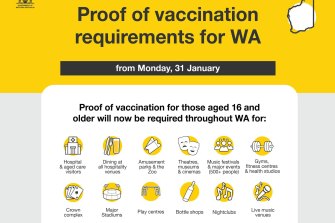 There were two ‘local’ infections connected to contained outbreaks revealed on Thursday.

One of the new local cases has been linked to the Hyatt Hotel cluster, where a security guard tested positive to the Omicron strain, while the second is a household contact of a previously reported interstate traveller.

The other 14 are 11 interstate and three international travellers, all now in quarantine. 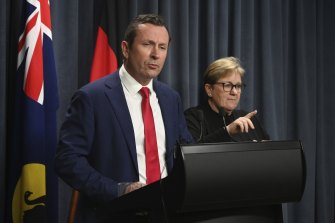 Health authorities are still conducting genomic sequencing to determine the strain of the separate mystery case reported Wednesday, known as Case 1260, involving a Perth woman who was believed to have been infectious since January 2 but only recorded a positive test on Wednesday.

Tests for the woman’s household contacts have come back negative and a handful of exposure sites were added to the state list of possible COVID-19 transmission locations on Wednesday.

The Department of Health says Case 1260 had not been attending work during her infectious period and there was likely to be only this small number of potential exposure sites.

Several exposure sites listed in recent days have been in the City of Cockburn, prompting officials to call on anyone who lives in the local government area who develops symptoms to get tested immediately.

Authorities are also trying to hunt down a ride-share driver who transported a positive case, who had been self-quarantining in a Perth hotel, a short distance to the Royal Perth Hospital testing clinic.

The infected person was taken back to their hotel by St John Ambulance in a vehicle dedicated to COVID-19 patient transfers.

The risk to the community from the case is considered to be low as it was not likely they were still infectious.

In response groups like Woolworths have brought back quantity limits with toilet paper and painkillers restricted to two packs per customer both in-store and online nationwide.

Mince, sausages and chicken product limits of two packs per person have also been introduced for WA stores only because of ‘excessive buying’. 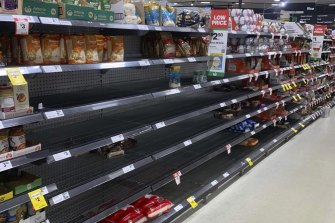 Staples like rice are being stripped from shelves in places like Woolworths in Melville.Credit:Ashtyn Hiron/9 News Perth

Woolworths director of stores Jeanette Fenske said in a statement customers may notice gaps on shelves but the company was doing what it could to meet demand.

“We understand this is an anxious time for our customers across the country but we will remain open and operational as an essential service,” she said.

“We will continue to closely monitor product availability across our stores, with stock continuing to be sent to stores daily.

“We encourage everyone to be mindful of others in the community and to continue shopping in reasonable quantities.”