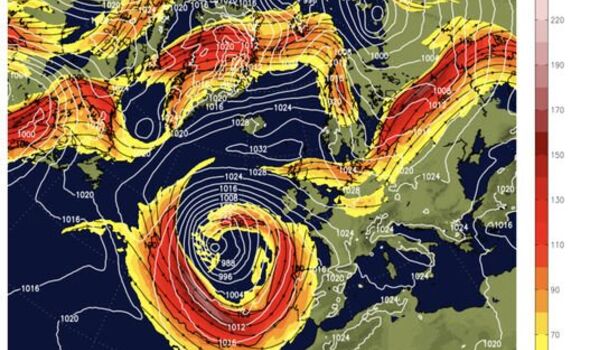 Heavy rain will plough in from France and the Continent through the end of October, driven by a ‘wallowing’ cyclone.

Jim Dale, meteorologist for British Weather Services, said: “The main story for the next 10 days the risk of rain which will arrive in plumes from Spain, France and the Bay of Biscay.”

“Some of these will be heavy with the risk of thunder, and although wind will not be the main issue, there will be some strong gusts in exposed areas or around the coasts.”

“While this will be good news in terms of replenishing the rivers and reservoirs which are still low after summer, it is going to be a particularly unsettled period of weather.”

Southern and southwestern regions closer to the low-pressure ‘cyclone’ are in the firing line for the heaviest downpours, he said.

Bands of rain sweeping the region will circle the spinning system which shows no sign of budging this month.

High pressure to the east will block it from passing through, instead anchoring it in the Atlantic to hurl foul weather our way.

It will be powered by the jet stream which has fragmented over the Atlantic and coiled into a ‘cut-off low’.

Mr Dale, author of Weather Or Not? said: “This area of low pressure which has become wrapped up with the jet stream is spinning to the south west of the country, and will start sending spirals of rain towards the UK.

“It is a wallowing low, not deepening but sitting to the west of the country held in place by blocking high pressure over Eastern Europe.”

“It threatens a lot of rainfall and some quite heavy showers, so we are keeping our eyes on it.”

A battle between high and low pressure will help drive the wet and windy spell, according to the Met Office.

Met Office meteorologist Alex Deakin said: “Looking at the bigger picture, high pressure is to the north, low pressure to the southwest.

“And this week is going to be a bit of a scrap between these two weather systems. Eventually, the low will win out.”

“As the low squeezes up against the high, the isobars push together, suggesting at times it’s going to be quite blustery”.

As air arrives from the south, temperatures will rise above average for the time of year with highs in parts expected to nudge 20C.

Thermometers will fluctuate through the coming days as winds veer from the east, but it will be warm in the sun, Mr Deakin added.

He said: “There will be showers coming and going through the day on Friday.”

“But, with a bit of sunshine, temperatures certainly in the southeast could be knocking on the door of 20 Celsius easily.”

“And elsewhere, temperatures still will be well above average because the air is still coming up from the south.”

Netweather forecaster Nick Finnis added: “It is likely to continue being unsettled over the weekend, though there is some uncertainty over regional details.

“It appears that an area of low pressure will clear east from central parts on Saturday, where it will bring some showers to southern Scotland, Northern Ireland and northern England for a time.”

“Sunday could be windy with showers or longer spells of rain across the south, drier and brighter but breezy across the north.”