WAUKESHA, Wis. – The family of an 8-year-old boy who died as a result of the Waukesha, Wisconsin, Christmas parade tragedy is encouraging children who attend Thursday’s memorial services to wear baseball jerseys in his honor.

A visitation service and subsequent funeral will be held for Jackson Sparks starting at 4 p.m., followed by a funeral at 7 p.m. local time at Brooklife Church in Mukwonago, Wisconsin.

The third-grader died Nov. 23, two days after the horrific events at the Christmas celebration, where suspect Darrell Brooks Jr. allegedly drove his maroon Ford Escape SUV through the barricades and into a crowd of parade-goers. 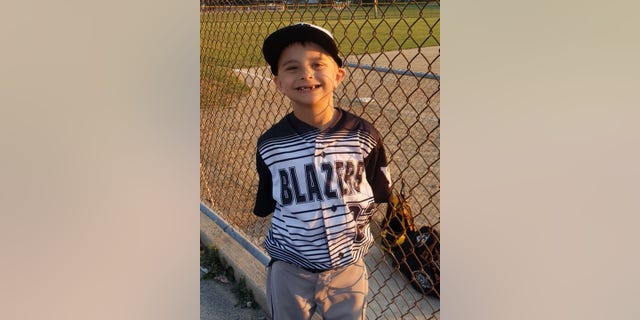 “Our sweet little boy is now under the care of Jesus,” his obituary states.

Jackson was the only child to have died from the tragedy. The five other victims have been identified as Tamara Durand, 52; Jane Kulich, 52; LeAnna Owen, 71; Virginia Sorenson, 79; and Wilhelm Hospel, 81.

Jackson was marching in the parade with his older brother, Tucker, and the Waukesha Blazers baseball team when they were injured, according to FOX 6 of Milwaukee. Tucker, 12, was reportedly expected to survive his injuries.

In addition to his brother, Jackson is survived by his parents, grandparents, a great-grandparent and several aunts and uncles, among other loved ones.

“Jackson loved baseball and played for the Waukesha Blazers,” the obituary states. “When not playing baseball, or slam-dunking basketballs throughout the house, Jackson enjoyed fishing, catching frogs, and playing with his brother Tucker and his dog Qi’ra.”

The family encouraged children to wear baseball jerseys to the service in honor of the young boy’s memory.

Using #Jerseys4Jackson, social media users – including an account linked to MLB’s Milwaukee Brewers – have expanded upon the effort to honor Jackson’s life and love of sports by asking people to have their children wear baseball jerseys to school on Friday.

And the Waukesha Blazers have created several ways to support the community in the wake of the tragedy, including by selling T-shirts “to support our efforts to create a space where the community can heal, remember, and celebrate Jackson,” according to a Facebook post.

In a previous post, Waukesha Blazers’ President Jeff Rogers described Jackson as “a sweet, talented boy who was a joy to coach.”

“Jackson was tender-hearted with a contagious smile,” Rogers said. “He was the little guy on the team that everyone supported. You couldn’t help but love him.”

The Sparks family has asked mourners to direct gifts to Waukesha Blazers Memorial Fund in lieu of flowers.

Pakistani 'stoned to death' in Indian jail amid Kashmir tensions

Meghan and Harry ‘look in fierce competition’ with William and Kate, expert says