Belarus: One day after President Alexander Lukashenko of Belarus promised to crush with an iron fist the protests since his reelection this month, tens of thousands of people took to the streets of the capital Minsk to show their determination to force him out of office.

After a week of rallies and publicity stunts in support of Lukashenko, who has led Belarus, a former Soviet republic, since 1994, many expected the protests against him to ebb. But by late Sunday afternoon, a sea of people had filled the main Independence Avenue in central Minsk, blocking all traffic there and on side streets. 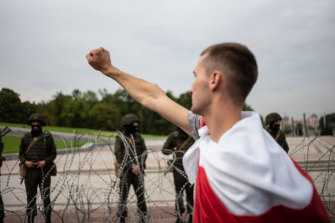 Anti-government protesters walk past riot police as part of the near daily rallies against the Belarus president.Credit:Getty Images

Some estimates put the number of demonstrators at more than 100,000, in what appeared to be a repeat of a similar rally a week earlier.

Although Lukashenko declared a landslide victory and 80 per cent of the vote in the August 9 election, protesters and international bodies, including the European Union, have called it fraudulent. The main opposition candidate, Svetlana Tikhanovskaya, also declared victory and fled to neighbouring Lithuania out of fear for her safety.

Initial protests over the results were met with a violent crackdown by Lukashenko's robust law enforcement apparatus, including beatings and mass detentions.

No arrests or clashes were reported on Sunday, despite the presence of riot police vans parked near the demonstrations, though Lukashenko told a rally of supporters in the city of Grodno this weekend that protesters had until Monday to calm down. 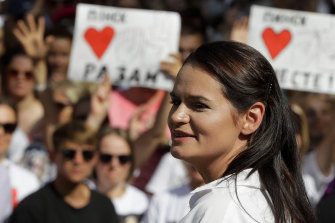 Many at Sunday's protest were wrapped in Belarus' traditional white-and-red flag, which became an opposition symbol after Lukashenko replaced it with a more Soviet-looking emblem soon after coming to power. A few came with the one used by Lukashenko's supporters — a bid to show that the country is united in a desire to see him gone from office.

It "doesn't matter what flag it is; we just want him to leave," said Darya O. Rolya, 28, an accountant.

It was unclear how the protesters could achieve that aim, with Lukashenko having indicated repeatedly that he has no intention of succumbing to pressure from the streets.

"We had elections," he told a crowd of workers on August 17. "Until you kill me, there will not be any more elections." 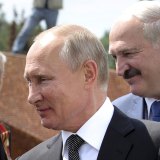 An embattled Alexander Lukashenko (right) has turned to Vladimir Putin for help as protests continue.Credit:AP

Over the past week, Lukashenko pushed to rally his supporters around the flag. He made a flurry of statements about an imminent invasion from the West and an internal conspiracy to destabilise Belarus. He accused protesters of being against Russia – a key ally – and called them "rats" and "trash". On Sunday, some protesters waved the Russian flag to show that they do not want their country to turn away from Moscow.

Some of Lukashenko's assertions seemed directed at the attention of President Vladimir Putin of Russia, who is leery of any anti-Russian protests in former Soviet republics. On Saturday, Lukashenko thanked Putin and called him a friend, one day after confirming having invited several Russian journalists to replace the Belarusian ones who resigned from state-run news media outlets this month in protest over censorship.

Some protesters said that they had achieved a significant feat by exceeding the turnouts at Lukashenko's rallies but that it would be hard to put more pressure on the president.

One of them, Alexander Potekhin, said the protests needed a leader.

"By itself, a crowd of people cannot achieve much," said Potekhin, 30, a construction engineer. "I feel that something more radical is required to achieve our aims, but people are afraid to do that."

The most important news, analysis and insights delivered to your inbox at the start and end of each day. Sign up to The Sydney Morning Herald’s newsletter here,  The Age’s newsletter here, Brisbane Times‘ here and WAtoday’s here.