Home » World News » ‘We stand together in our horror’: interfaith ceremony united against hatred

They walked side by side up the white marble steps of St Mary’s Cathedral in central Sydney, the Catholic archbishop in his purple robes, the Muslim grand mufti in a black suit and tie.

They were to speak of 50 lives lost and two countries anguished by violence, in an interfaith ceremony dedicated to the Christchurch massacre. 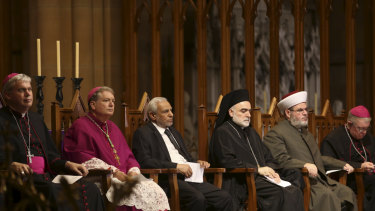 Archbishop Anthony Fisher spoke first, welcoming those from all faiths.

“We stand together in our horror at the real evil we have witnessed, at the violence perpetrated and the hate that inspired it,” Dr Fisher said.

The archbishop catalogued Tarrant’s boasts of snorting cocaine and hiring prostitutes, his self-description as the strongest man in town – “a goddamn monster of willpower”.

“To all young people like him we say today: if it is real strength you want, you will find it in compassion and mercy, not hate and violence.”

“As-salaam alaikum,” he concluded his message. Peace be upon you.

He and Grand Mufti Ibrahim Abu Mohammed kissed on the cheek three times before shaking hands.

Dr Mohammed then assumed his spot before the golden lectern with a translator at his side, his hands free of notes – sometimes open, sometimes clenched, sometimes pointing out from his heart.

“I would like to speak beyond the torrent of pain that I feel,” he began, his long Arabic sentences rising and falling.

“Whether you are Muslim or Christian or Jewish or any other faith group, as long as you live in Australia, as long as you are part of this family, nothing will divide us."

Dr Mohammed mourned the victims, but he counted another beyond those shot dead: their killer, subsumed by hatred.

“This criminal, this terrorist, he is one of those people we have lost,” he said. 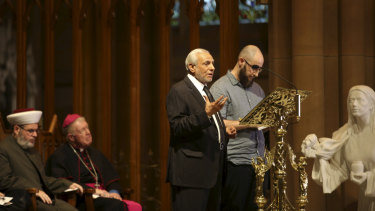 Heads of religious faiths unite with members of the public and heads of state, including Prime Minister Scott Morrison and NSW Premier Gladys Berejiklian, at St Mary’s Cathedral Sydney.Credit:James Alcock

“This person who grew up like any of us.”

Dr Ibrahim shook hands with the Premier and Prime Minister before walking off with Dr Fisher toward the back of the cathedral.

Outside in the drizzle, police stood on the steps while their colleagues rode on horseback in fluoro vests further on, watching over a place of faith. 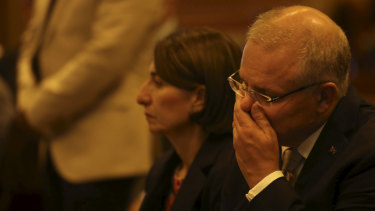 Scott Morrison was among the gathering at an interfaith service at Sydney’s St Mary’s Cathedral on Sunday. Credit:James Alcock

Earlier on Sunday the Prime Minister gathered with about 200 parishioners at St Mark's Coptic Church in Arncliffe in southern Sydney with his wife Jenny Morrison and their two daughters.

He was joined by Immigration Minister David Coleman to pray for the victims of the massacre.

Mr Morrison urged Australians to come together and spread messages of hope after the "horrendous and despicable" attack.

"In a moment, innocence can be attacked and lost by an act of hate," he told the congregation.

Sunday's gathering was attended by several religious leaders and the consular general of Egypt.

"When someone goes into a church, mosque or temple or any place of worship and shoots innocent people – it is not acceptable in any way," he said.