Wealthy property owner, 58, who beat and abused vulnerable woman and stole £80,000 of her benefits as she kept her as a ‘domestic slave’ for 16 YEARS is jailed for six years

A wealthy landlady who punched, kicked and verbally abused a vulnerable woman she kept as a ‘domestic slave’ has been jailed.

Farzana Kausar, 58, gradually trapped Jacqueline Whittington, 60, over a period of 16 years, through a campaign of physical, verbal and psychological abuse.

Ms Whittington was forced to work 14 hour days, cooking, cleaning and looking after her three young children. She was not paid for the ‘years of drudgery’ and saw her benefits money taken by the landlady.

Yesterday, Kausar was sentenced to six years and eight months behind bars after a jury at Lewes Crown Court found her guilty of keeping a person in slavery or servitude. Ms Whittington remains in the care of health services. 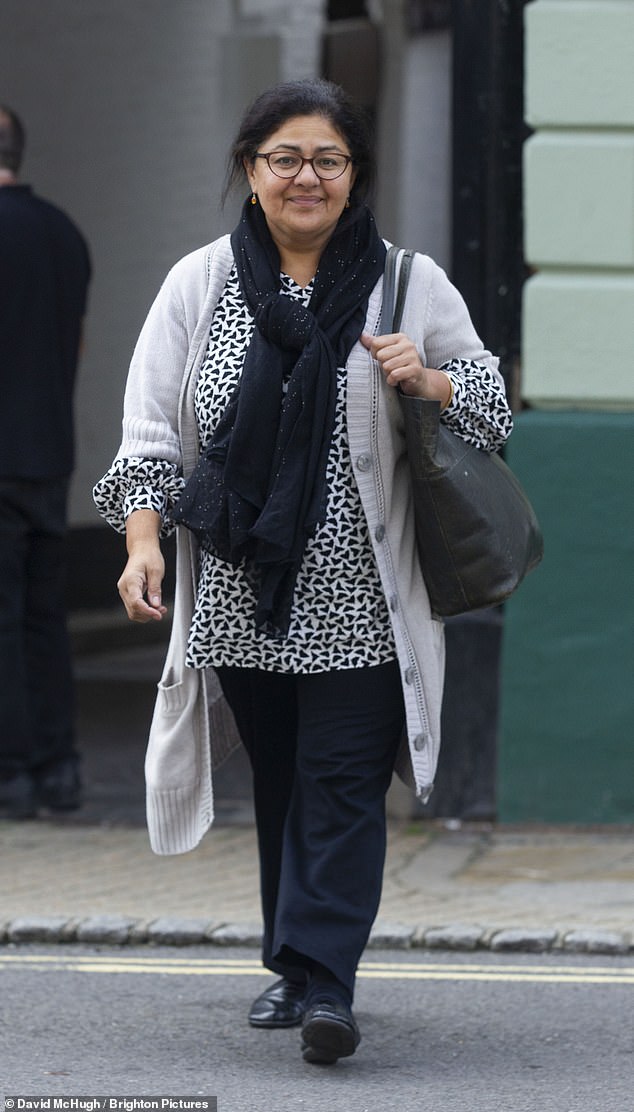 Farzana Kausar, 58, has been jailed for more than six years after she kept an elderly woman as a ‘domestic slave’ for 16 years

Lewes Crown Court heard how Kausar, from Worthing, West Sussex, was a wealthy woman who owned several prestigious properties in Brighton and London which she rented out to tenants.

Ms Whittington – a long-term alcoholic – had left her husband and four children in the 1990s. She first met Kausar around 2004 when she was living in a flat in Worthing, East Sussex owned by the defendant’s mother.

Ms Whittington was asked to carry out some work for the family and was taken to London to carry out to decorate a house.

But while she was there Kausar told her she wasn’t wanted back at the Worthing flat and would instead be housed in London.

Shortly afterwards she moved in with Kausar, her husband Mohammed Hanif and their young daughter Isla.

Initially she worked as a live-in domestic servant, carrying out household chores while staying at a variety of addresses in London and Brighton.

Ms Whittington was ‘made to work unconscionably long hours’ and subjected to such fear of Kausar’s rages or violence that she spent her life ‘treading on eggshells’.

The victim did not have an employment contract and, although Kausar promised to pay her for her work, the mother-of-four never received a wage. Instead Kausar took full control of her victim’s finances.

She would open and withdraw money from bank accounts in her name and making benefit claims on her behalf.

The 62-year-old’s bank accounts were also used to pay bills from across Kausar’s property empire and her name was used to register Kausar’s car for disabled use – allowing her to dodge road tax and park in disabled bays.

Kausar, who sent her daughter to the exclusive £14,000 a year Roedean girls’ school, took Ms Whittington’s benefits from her though she regularly bought her cigarettes and alcohol.

Over the years, the court heard, that Kausar took around £80,000 worth of benefits from Ms Whittington.

Kausar would also would accompany the Ms Whittington to all of her medical appointments – pretending to be her carer.

The jury was told Kausar also attacked the mother-of-four in a rage, tore a necklace from her throat and smashed her glasses into her face, causing a laceration.

The property owner once barged her way into a doctor’s consulting room as Ms Whittington was in the middle of an appointment. Kausar would accompany her to all of her medical appointments – pretending to be her carer.

Police were first alerted to the landlady’s callous treatment in May 2019 when the family’s nanny, Michelle Ormiston, witnessed the ‘shocking’ treatment of the live-in helper.

Ms Ormiston – who had been employed to support Kausar’s family – reported that the victim was subjected to abuse and appeared to be carrying out most of the household chores while also living at the address.

Adult Social Services and police were alerted about the situation. Officers paid a visit to the address where they found all of the victim’s belongings were in black bin bags, while she was forced to sleep in the children’s bedroom.

She had no access to her ID documents, passports or bank cards, which were found in a locked room – along with financial documents made out in her name to addresses to which she had no connection.

Kausar was arrested on suspicion of modern slavery offences and assault, and was released on conditional bail while police continued to make enquiries.

The victim was temporarily housed in Brighton and Hove and supported by social services, but disappeared a short while later.

Her phone numbers were disconnected, she left her GP and made no contact with any of the support services.

The 62-year-old only resurfaced when the officer in charge of the case received a letter – supposedly from the victim – retracting her allegations and claiming it was an elaborate set-up by the informant to get Kausar into trouble.

But in May 2020 police were able to trace the victim to an address in London.

Kausar was charged with holding a person in slavery or servitude between August 2015 and May 2019.

She was also charged with attempting to pervert the course of public justice by getting Ms Whittington to withdraw her charges.

Yesterday she was sentenced to six years for the first charge and eight months for attempting to pervert the course of justice.

Modern slavery laws were only introduced in 2015 in response to a growing need for legislation.

Judge Christine Laing KC, said during her sentencing: ‘No sentence I can pass can undo the harm done to Jacqueline Whittington, restore her relationship with her own family or restore the years and years of being deprived of the freedom to live her life her own way’.

She said the victim was a vulnerable woman who clearly had difficulties with alcohol and had a strained relationship with her own family.

Judge Laing said: ‘You exploited that vulnerability and had a wholly conceited disregard for her as a person. You exerted more and more control over her.’

She said as she had no control over her own life Ms Whittington became more and more dependent on Kausar for her daily needs which left her imprisoned in a ‘life of drudgery.’

She said: ’You subjected her to regular physical violence, slapping and punching and pinching and hair pulling and kicking’.

‘Her life has been destroyed and you have been the major part in that’.

Ryan Richter, prosecuting, argued how the ‘defendant took control of Ms Whititngton’s life and isolated her so she became reliant on her.’

He said the violence began when Kausar threw a recycling box at her for leaving some cooked meat out in the kitchen.

When the family went abroad on holiday, Ms Whittington would travel with them to act as their domestic servant.

She told police that Kausar worked to isolate her from any contacts or friends and was more and more controlling. She claimed that although she did possess a mobile phone it was often confiscated by the defendant.

And when her mother died, she only found out it had happened weeks later and the funeral had already taken place.

Mr Richter told the court: ‘Mrs Kausar would tell her she wouldn’t last one minute if she went out on her own and told her, “At least with me you have a roof over your head.”’

He said her control led to ‘years of drudgery’ that was accompanied by physical, mental and financial abuse.

Mr Richter said: ‘Ms Whittington was abused verbally and beaten physically, slapped, kicked and punched and was dragged across the table. A car door was closed on her ankle, fracturing it’.

The court heard as a result of the case Ms Whittington’s health had completely collapsed.

Judge Laing said that although the indictment only covered four years due to the Parliamentary legislation she could not over look the fact the control had started ‘many years previously’.

She also recommended that Ms Ormiston receive a High Sheriff award of £500 for raising the alarm over the treatment of Ms Whittington.