Boris loyalists say bring him back: Weeks after being forced out of No. 10, Johnson’s allies say he is ‘itching to take the fight to Keir Starmer’ and re-unite Tory party

More than a dozen Tory MPs and peers threw their weight behind Mr Johnson – who only left office six weeks ago – as the best choice to replace Liz Truss.

He is understood to be taking soundings from friends, but is said to believe he can turn the Tory party and country around.

Mr Johnson, who is currently on holiday in the Caribbean but was last night mulling cutting short his break to fly home to London, believes it to be a matter of the ‘national interest’.

According to one ally, he is encouraged by early indications of support from MPs – and some ministers who forced him out are said to be privately calling for his return. If he believes he can make the final round of the race he is likely to run, the source added.

Another close political ally of the former prime minister last night told the Daily Mail that Mr Johnson was ‘itching to take the fight to Keir Starmer’.

They hailed Mr Johnson as a ‘proven election winner’ and ‘a great campaigner’ and the only potential candidate with a direct mandate from voters. The ally said that if the Tory party was ‘serious about power’ then he was ‘the only choice’. 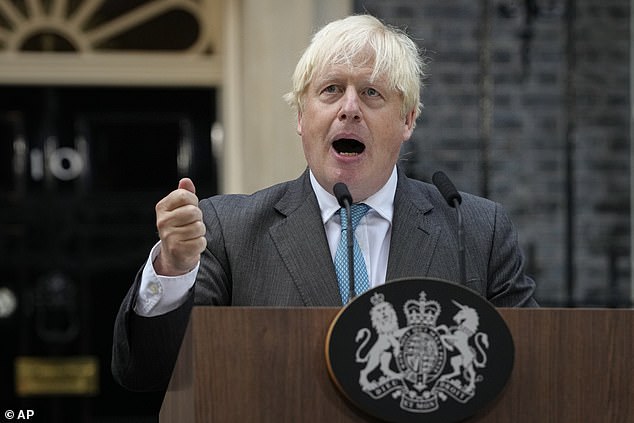 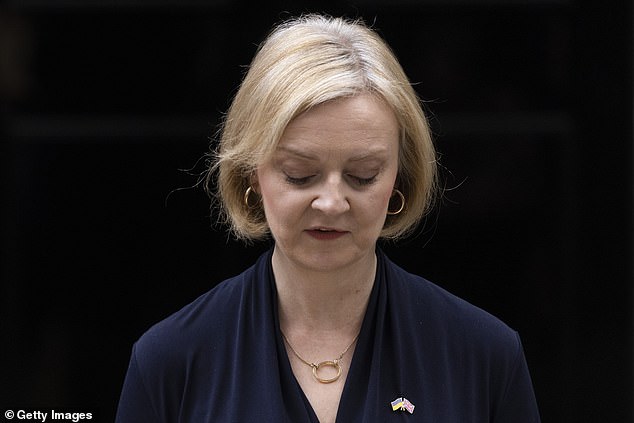 Supporters among Tory MPs argue he is the only potential candidate with a mandate to govern after winning a large Commons majority in 2019, and say this would diminish calls from Labour for a fresh General Election.

A YouGov poll earlier this week found that Mr Johnson being handed back the keys to No 10 was the most preferred option among Tory party members if Miss Truss resigned.

But many MPs are opposed to him making a comeback because he has an inquiry by the Commons privileges committee over Partygate hanging over him. It is probing whether he deliberately misled Parliament about Downing Street parties during the Covid-19 pandemic – and he could be booted out as an MP were it to find against him, potentially plunging the Tories into fresh chaos.

If he won the leadership, Mr Johnson could organise a Commons vote on a motion for the probe to be quashed. If he whipped Tory MPs and won this, the threat would be eliminated. However, the leadership race rules mean candidates will only reach the ballot paper if they get the support of 100 MPs.

Several MPs said they don’t believe Mr Johnson will reach the threshold, with one saying the ‘brutal truth’ is he is likely to get no more than 60.

It meant Mr Johnson was being advised by some close friends not to run. But among those supporting a comeback by the ex-PM was former minister and Stevenage MP Stephen McPartland.

He said: ‘My inbox is full of people asking for us to bring back Boris. 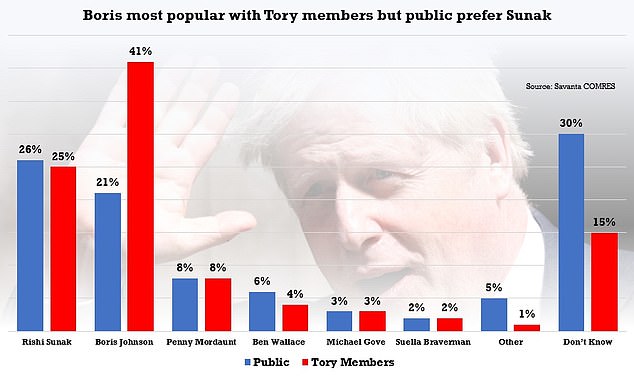 ‘Over 25,000 people backed our mandate in Stevenage in 2019 and I would like to see us deliver it for local people.

‘I am not aware he has made any decisions but they are asking and I am relaying their requests to bring back Boris.’

Andrew Rosindell, MP for Romford, said he was also supporting Mr Johnson. Fellow Tory Paul Bristow said: ‘We need an election winner and we had an election winner, so as far as I’m concerned I will listen to my constituents, and their message was “bring back Boris”.’

Michael Fabricant tweeted: ‘To be clear: he may not be the first choice of MPs (I may be wrong) but he most certainly is amongst the membership.

‘He’s a winner and the only MP with legitimacy having been overwhelmingly elected by the country. Without him calls for a General Election will grow.’ James Duddridge, Tory MP for Rochford and Southend East, posted on Twitter: ‘I hope you enjoyed your holiday boss. Time to come back. Few issues at the office that need addressing. #BringBackBoris.’

Nadine Dorries, one of Mr Johnson’s most loyal allies, tweeted yesterday: ‘One person was elected by the British public with a manifesto and a mandate until January 2025… MPs must demand [the] return of Boris Johnson.’

Former party chairman Andrew Stephenson also appeared to back Mr Johnson, tweeting: ‘During the last leadership contest [this summer] as party chairman I received countless emails from Conservative members wanting Boris on the ballot. Constitutionally that was impossible. Now it isn’t.’

But one ex-Cabinet minister said the Tories need to rebuild credibility with voters, and so it would be wrong for Mr Johnson to come back as PM and then attempt to axe the privileges committee inquiry. ‘It would be like a re-run of Owen Paterson,’ the senior MP said, referring to the disastrous attempt a year ago by Mr Johnson’s administration to spare one of his allies punishment for lobbying. 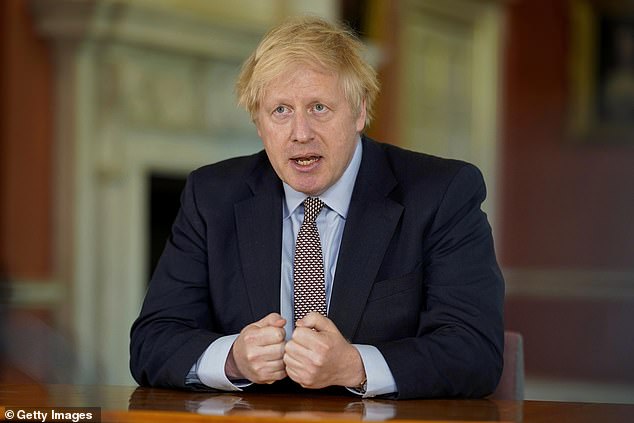 Meanwhile, John Baron said he would ‘find it impossible’ to serve as a Tory MP under Mr Johnson. He told the BBC he believes there could be ‘more than a few’ backbenchers who would give up the party whip.

Sir Roger Gale, another opponent, said: ‘We need to remember that Mr Johnson is still under investigation by the privileges committee for potentially misleading the House. Until that investigation is complete and he is found guilty or cleared, there should be no possibility of him returning to Government.’ Former Cabinet minister David Davis told LBC he was not sure Mr Johnson has enough support among MPs to stand – and said his advice to the holidaying former PM would be to ‘go back to the beach’.

Mr Johnson, the MP for Uxbridge and South Ruislip, was forced to resign in July after losing the confidence of his MPs and Cabinet ministers.

It came after a series of controversies, including being fined by Scotland Yard for breaching lockdown rules in Downing Street during the pandemic.

But it came to a head when his deputy chief whip, Chris Pincher, was accused of groping two men while ‘incredibly drunk’ at the Carlton Club in London.

Mr Johnson later admitted knowing about separate allegations of sexual misconduct against Mr Pincher. It sparked the resignation of chancellor Rishi Sunak and other ministers.

By Mick Hume for The Daily Mail

What a mess! After ousting Boris Johnson just three months ago in an act of tragic self-harm, the Conservative Party is now in an even worse state than before.

Amid economic chaos and polling that indicates near-total wipeout at the next election, the Tories seem unable to present a successor to Liz Truss to unite their warring factions.

But there is, of course, one obvious candidate – the only politician in Britain who can claim any sort of mandate to govern the country and calm this turmoil.

I am talking about Johnson himself. The Tory Prime Minister who, let me remind you, won a staggering 14million votes less than three years ago. It is time to say what many of those voters will surely be thinking – bring back Boris! I am no Tory loyalist. I have no vested interest in saving the Conservative Party from ruin. But I do want what’s best for Britain and British democracy.

Boris is, quite clearly, the only MP with a track record of strong leadership when it comes to big policy issues and the ability to unite his party with an 80-seat majority.

He may currently be persona non grata in Westminster salons, but many polls now show Boris to be the overwhelming choice among Conservative members – and many Brits outside the party.

That’s because Boris is the only Tory leader with any hope of getting the Government through the terrible mess which lies ahead. And it really would be terrible.

In an act of revenge for the EU referendum result, the same Establishment Blob that forced Johnson from office has effectively now staged a Whitehall coup – chasing out Brexiteer ministers such as Suella Braverman, installing arch-Remainer Jeremy Hunt as Chancellor and ousting the hapless Miss Truss, who had, for all her vices, tried to implement what she believed to be a truly Right-wing set of policies.

They have jettisoned much of the programme on which Boris won the election in December 2019 and, in the process, sucked the Tory Party back into a shapeless Blairite blancmange.

That is not the vision of Conservatism that people voted for in 2019 – and they wouldn’t vote for it next time round. Indeed, we would undoubtedly see a landslide for Starmer and his Lefty cabal of chaos, from the illiberal Lib Dems to Nicola Sturgeon’s Scottish nationalists. And, piece by piece, everything this country voted for – from getting Brexit properly done, to doing away with identity politics, lowering immigration and driving down taxes – would be dismantled or overturned.

We would witness Keir ‘I don’t know what a woman is’ Starmer going back, cap-in-hand, to Brussels; untrammelled wokery on the march; the break-up of the Union; and our public finances shot in a way that would make the current situation look relatively stable. We would be left living in an Athens-on-Thames economy without the sunshine.

The only person who has any chance of stopping all this is Boris. He would, no doubt, face a tough fight – but who else is there? The horrified Establishment will protest. The return of a leader so soon would be unprecedented. But unprecedented times call for extraordinary measures. So, for the sake of Britain – for the sake of democracy itself – we must bring back Boris!

Mick Hume is author of Revolting! How The Establishment Are Undermining Democracy And What They’re Afraid Of (Collins)