A large number of students at Wesley College staged a “boycott” of the school’s uniform on Thursday as anger around sexism, misogyny, lack of respect and sexual assault of girls in independent schools in Melbourne grew.

One current Wesley student told The Age she had been groped several times on school grounds, once witnessed by a teacher who did not act.

Students refused to wear the school jumper on Thursday and instead wore hoodies, which some said was in protest at comments about forgiveness made by principal Nick Evans at an all-school assembly he held on Wednesday to address misogyny on campus. 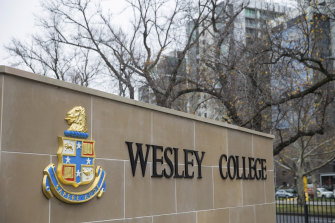 Some students from Wesley College boycotted the uniform in protest at handling of allegations of misogyny by other students.Credit:Paul Jeffers

As part of his speech about his own anger about the maltreatment of women and girls, including students at the school, Mr Evans cautioned students not to rush to condemn others and to “please understand what forgiveness is”.

He quoted Archbishop Desmond Tutu: “Forgiveness is simply about understanding that every one of us is both inherently good and inherently flawed. Within every hopeless situation and every
seemingly hopeless person lies the possibility of transformation.”

Mr Evans also suggested if students who allegedly made loud, misogynistic comments on a bus after Melbourne’s March 4 Justice on Monday had thought of how “the women in their own lives” would have thought they may not have spoken them. 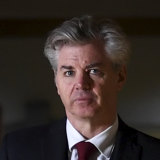 After the speech it is understood a group of senior school girls disclosed in a class that they were angry about it because they had been sexually assaulted by Wesley boys with whom they had had relationships.

At a second assembly on Thursday, the school’s head of campus at St Kilda Road, Kim Bence, appealed directly to students to disclose to her their experiences and observations of events in the school’s culture, or their personal experiences.

She said she would “work day and night to gather the information, the insights and experiences as led by you to effect positive change on this campus, it’s time.”

Ms Bence immediately commenced open forums with students, which she will run every lunchtime “for as long as it takes” to hear stories from Wesley students.

“The last couple of months have highlighted some deeply troubling things about our society … and Wesley is not exempt from this culture,” she said.

The assembly came as a growing number of girls from Wesley and other independent schools, and also parents, disclosed incidents to The Age of sexual harassment and abuse in their school communities.

One current Wesley student revealed: “My experience is that I have been groped multiple times on school grounds, one of which was witnessed by a teacher who empathised with me but didn’t do anything about it.

“I can’t wait in line for lunch without someone grabbing my butt. I can’t walk through school without passing people that have raped, sexually assaulted and or sexually harassed me or one of my friends.”

She said the school’s response in the past had been that unless a person is convicted of a crime action such as moving alleged perpetrators out of classes of alleged victims cannot be taken. “In my opinion this is not good enough,” she said.

Ms Bence told the assembly her own observations had given her deep concern for the urgent need to hear students’ lived experience and day-to-day observations of campus culture, and said students must act together to “call out sexist and misogynistic behaviour”.

She invited all senior students to the open forums and said hearing them in a safe and supportive way was critical to building a new strategy to address concerns of students and staff and to holding people to account.

A spokesman for the school said Mr Evans had also personally invited students to disclose their experiences to him and many had begun to make appointments to do so.

The Herald Sun reported today that girls at Wesley College had started an online petition to share stories about sexual assault, harassment and misogyny.

Catch all the day’s headlines

At the end of each day, we’ll send you the most important breaking news headlines, evening entertainment ideas and a long read to enjoy.  Sign up here.