What if Bonnie Prince Charlie had WON with his army of Jacobites? How Britain’s history would have been VERY different if the heir to the British throne had won his battle in 1745

When Bonnie Prince Charlie marched south from Scotland towards London with an army of Jacobites in 1745, the future of Britain hung in the balance.

Up to 14,000 Scottish, Irish and English men took up arms to support the claim of ‘The Young Pretender’ Charles Edward Stuart as he campaigned for the return of the House of Stuart to the British throne.

After sweeping through the north of England and into the Midlands, there were fears in the South he would continue into London.

But he would get no further than Derbyshire, as his army faltered before retreating to Scotland, despite having an almost clear run at the capital.

The impact of this retreat and subsequent failure could have had an even bigger impact on the future of Britain and large parts of the world than could have imagined at the time.

Some historians say had the uprising been successful and the Jacobites retaken the throne it is possible the American Revolution may never have taken place and that Napoleon would never have come to power in France. 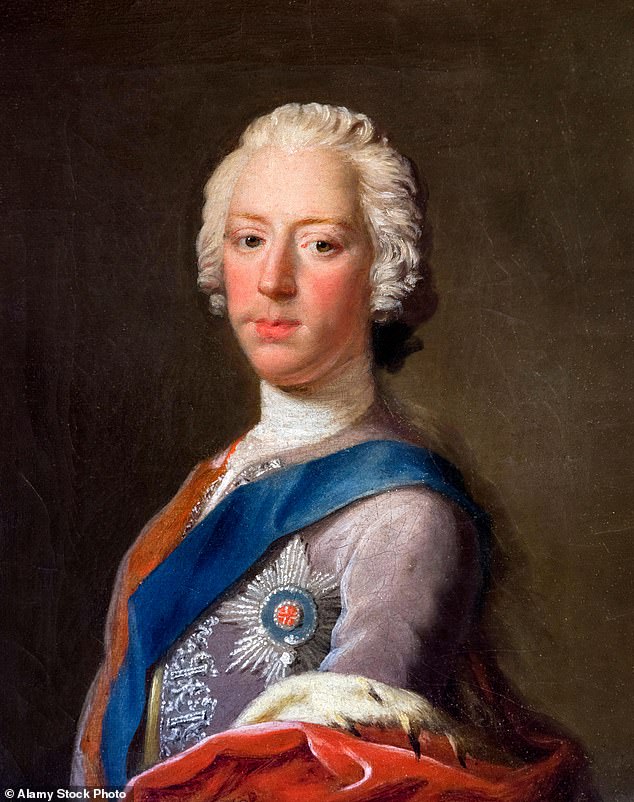 Bonnie Prince Charlie marched on London with an army from Scotland as part of the Jacobite Uprising in 1745. Pictured: A portrait of Prince Charles Edward Stuart in 1745 by Allan Ramsay 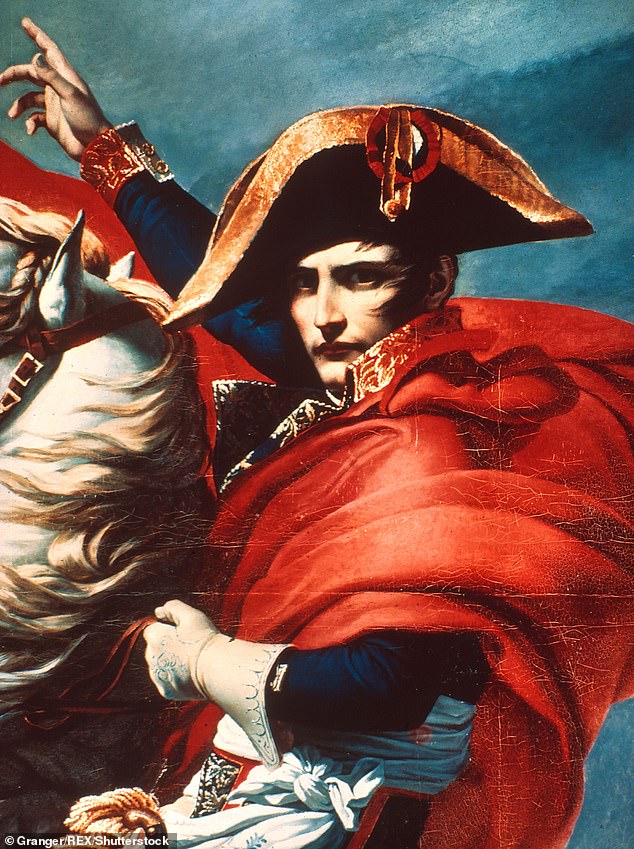 A successful Jacobite rebellion could have prevented the rise of Napoleon Bonaparte, one historian has said. Pictured: A painting of Napoleon Crossing The Alps in May 1800, by Jacques Louis David

Charles Edward Stuart was the grandson of James II of England, who had been deposed in the Glorious Revolution of 1688, and was the Stuart claimant to the thrones of England, Scotland and Ireland.

Now known as Bonnie Prince Charlie, in his lifetime Stuart was called ‘the Young Pretender’, a reference to his claims on the throne.

After being raised in Italy by his father, the Catholic prince garnered the support of France to launch an invasion with the aim of being installed on the throne in 1744.

This initial attempt proved unsuccessful after the French fleet was scattered in a storm, and led to wavering support from the French, but it didn’t stop Stuart continuing to make calls for support to his claim among the courts of Europe.

In July 1745 he set sail for Scotland having been assured by Scottish exiles that there was support for the Jacobite movement in the country and trying to take advantage of the fact most of Britain’s army was fighting in Europe.

Over the course of the next year he led thousands of troops down into England, recording impressive victories along the way.

However, he was forced to turn back after his War Council of generals became skittish at the lack of support from the French and locals as they moved south.

The retreat ultimately led to the Battle of Culloden near Inverness, the last land battle fought on British soil, which ended in a bloody defeat for the Jacobites.

Charles survived the battle but fled Scotland to France in the months that followed and would never step foot in Britain again. He died in Rome in 1788 at the age of 67.

According to historians Murray Pittock and Daniel Szechi, the close relationship between the House of Stuart and the French monarchy could have meant that its success would create a world far different to the one we see today.

Extensive financial support given to the Stuart’s by the Bourbons when they were previously on the throne, and the backing after they were deposed, made it likely Britain would become a peaceful ally of the French if they were returned as monarchs.

‘A Stuart restoration would immediately have led to a close alliance with France,’ Professor Szechi said, an expert in early modern history and the Jacobite movement.

This could have both helped Britain’s economic outlook while harming its dreams of empire.

‘Peaceful relations following on from such an alliance could then have possibly led to long-term economic cooperation, though Britain would not have been able to expand its colonial holdings anywhere near as much as it did during and after the Seven Years War in 1756-63,’ he added.

‘France was the superpower of eighteenth-century Europe; being attached to France would in many ways have been advantageous. Think of the US:British “Special Relationship”.’

Prof Szechi said that while Britain’s empire in the Americas and India might not have become as large under this alliance, it would have also constrained a burgeoning independence movement in the United States.

‘The American colonies in particular would not have been able to expand westward at the expense of the French empire – the major cause of Britain and France going to war in the Seven Years War,’ he said.

‘They would also have been denied French support in the event of a bid for independence later in the century. Indeed, the French might well have intervened against the colonists in support of their British ally. So [it is] likely [there would have been] no American Revolution, or at least not in the eighteenth century.’

Professor Pittock, Bradley Professor and Pro Vice-Principal at the University of Glasgow, said by comparison, it could also have hugely changed the face of Europe by preventing the rise of Napoleon Bonaparte.

‘In 1759, the British Empire defeated France in Quebec, Quiberon Bay, Minden and India, to become the number one global power,’ he said.

‘The maximal historical change from a Stuart restoration might have meant the following.

‘No 1756-63 war for global supremacy, but a more measured relationship with France, with spheres of influence developing.

‘No 1776-83 War of American Independence leading to American victory as taxes would not have been raised in the colonies to pay for the 1756-63 war and the Americans would have feared the presence of French troops in French Canada and America – they would also not have been able to call on French help.’

He added that this meant the French economy would not have been ‘devastated by war costs and its morale’, and in turn meant there would be no conditions for the 1789 Revolution that launched Napoleon to power. 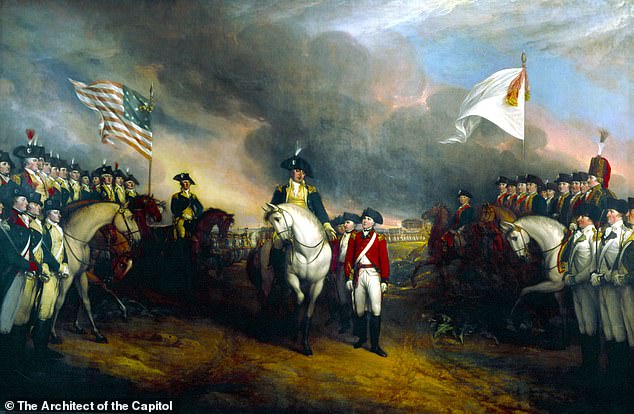 Another historian has said it is possible having a Stuart on the throne would have prevented the US Revolution. Pictured: An 1817 painting by John Trumbull depicting the surrender of Lord Cornwallis to George Washington at Yorktown at the end of the American Revolutionary War 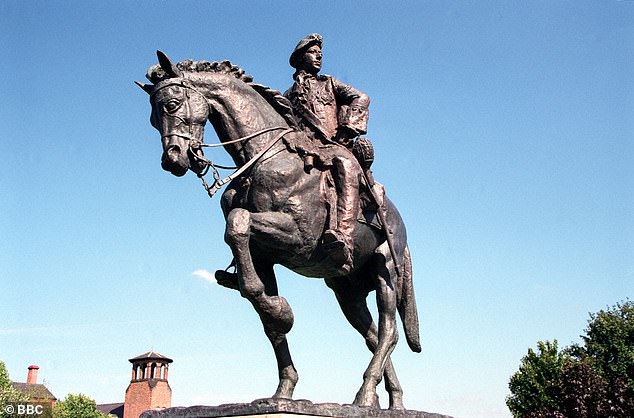 Bonnie Prince Charlie made it little further than Derby during his march south into England. Pictured: A statue of ‘the Young Pretender’ in Derby

At home the outlook could have been so much different, with Stuart’s on the throne potentially thwarting the creation an independent Ireland.

This would be due to their desire to keep England, Scotland and Ireland with separate parliaments and constitutions, united under one crown.

Prof Szechi said: ‘In the long term this could have produced either a more federal British state or intolerable tensions leading to conflict between the three kingdoms – as in the Great Civil War of the seventeenth century.’

Mass grave of Highlanders massacred after the Battle of Culloden may have been found by ground-penetrating radar more than 270 years on: Click here to read more 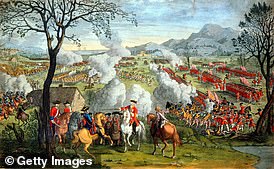 ‘In the modern era class and race are the main creators of social tension, but prior to 1829 religion was the crucial nexus of social conflict, and one immediate result of a second Stuart restoration would have been a general religious toleration throughout the British Isles.

‘Catholic emancipation in particular only came in after massive popular agitation in Ireland – implicitly threatening revolution there – in the 1820s. A Stuart restoration in the 1740s would have brought it in peacefully 80 years earlier.

‘This would have created social tension and possible unrest in the short term, but resolved the issue in the longer term.’

Prof Pittock added that the Stuart favouritism for a ‘decentralised monarchy’ would have had implications for Irish independence.

He said: ‘There would probably have been no Irish Union in 1801 or Irish independence but a semi autonomous Irish parliament under the Crown. Ditto for Scotland.

However, it never came to pass with the Bonnie Prince forced to turn back before even reaching London.

After flooding south with momentum on his side, the generals on his war council became skittish at the lack of support from locals as they made their way through England and the absence of promised French reinforcements. 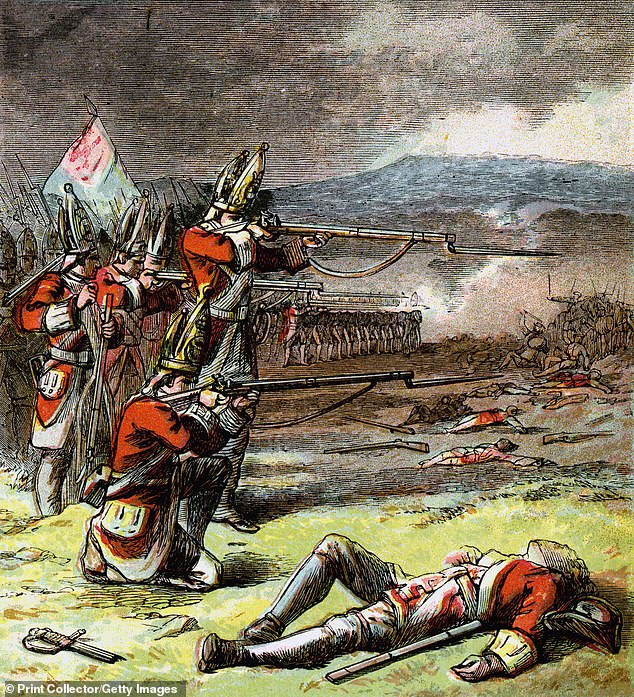 This came to a head at Derby, where his Charles’s top commanders refused to march further south, and instead demanded the army return to Scotland, infuriating ‘the Young Pretender’.

National Trust reveals slave trade links to battlefield where Bonnie Prince Charlie was defeated because he sailed to Scotland on a slave ship: Click here to read more 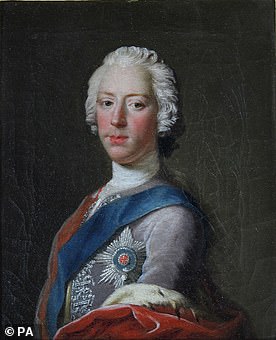 Prof Szechi said: ‘Charles Edward Stuart tried bluster and tantrums, but could produce no written or other promises to that effect [that English Jacobites would rise in support] from accredited English Jacobite sources. His officers therefore demanded that the army return to Scotland.

‘Ironically enough, there is some evidence that the English Jacobites had finally got their courage up to the sticking point and were at last prepared to rise if the Jacobite army made it to London.’

Prof Pittock points out that while Charles had only picked up under 1,000 supporters during his march in England, he was ‘doing no worse for English support than his great uncle Charles II had at Worcester in 1651′.

According to professors Szechi and Pittock, if Charles had continued his march south the odds were still stacked against him and heavily reliant on French support.

And even then, success in London might only have led to a bloody civil war.

Prof Pittock said: ‘Victory was possible, but the odds were still heavily against him at Derby.

‘The only force between him and London was at Finchley, outnumbered by the Jacobites three to one.

‘The Jacobites would almost certainly have entered London but Cumberland’s force would have been less than 48 hours behind them.

‘Much would have depended on morale. In the case of victory, Charles would have been Prince Regent, inviting his father James to take the throne. 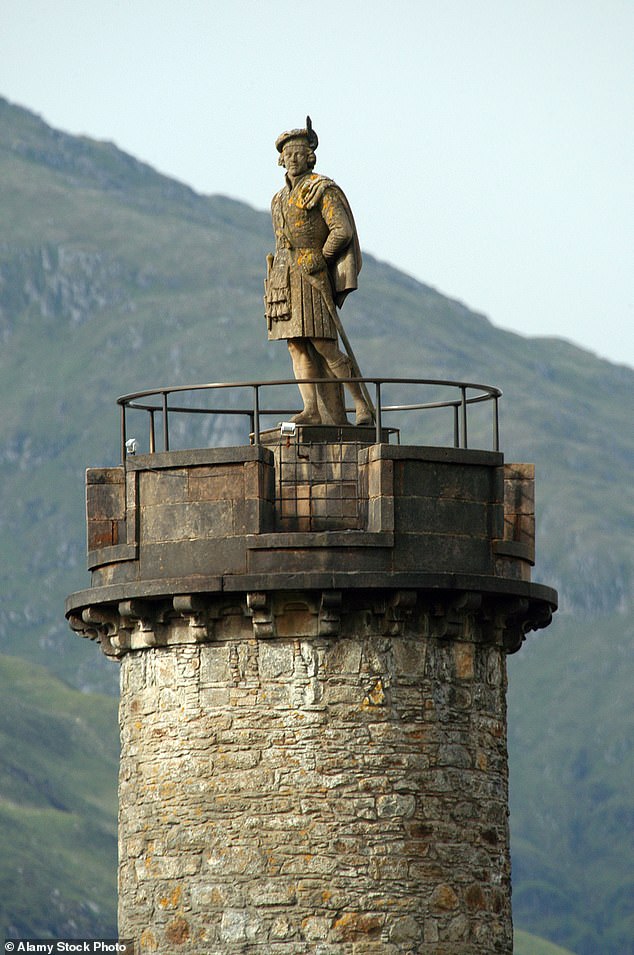 Charles had announced his family’s claim on the throne at Glenfinnan in Scotland. Pictured: The Glenfinnan Monument to the Jacobite Uprising of 1745, located at the head of Loch Shiel in Scotland 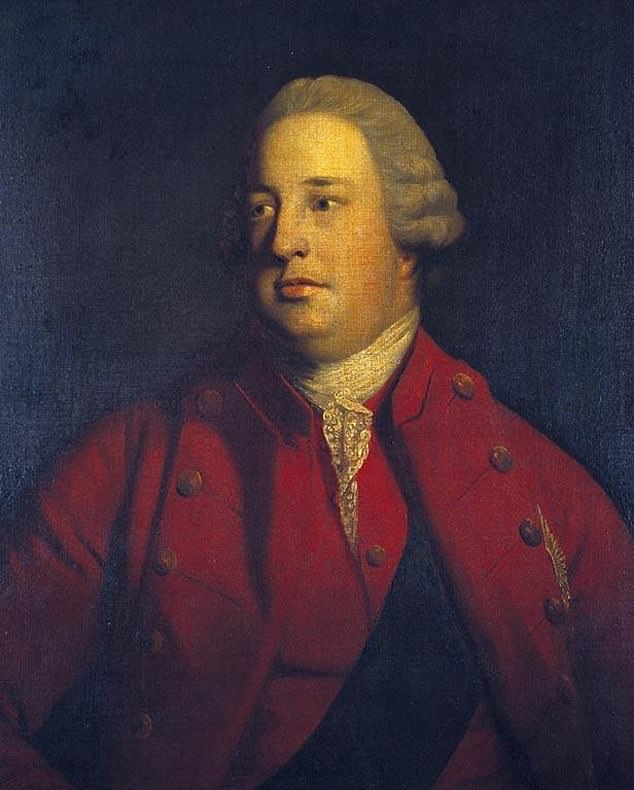 Prof Szechi added: ‘He could have taken London if the French had landed in support of the (quite small) Jacobite army. To be blunt, everything hinged on French intervention.

‘Would his successful seizure of power have been sustainable?

‘Yes, provided he won the civil war in the British Isles that was bound to follow the restoration of the Stuarts, and here again French (and to a lesser extent Spanish and Swedish) intervention would have been crucial.’

As it was the retreat at Derby ultimately led to the Battle of Culloden near Inverness, the last land battle fought on British soil, which ended in a bloody defeat for the Jacobites.

Following this the British Army, led by the Prince William, the Duke of Cumberland, carried out a campaign of brutal reprisals in Scotland, targeting Protestants and Catholics alike.

They were so bloody, with anyone suspected of being a ‘rebel’ killed and ‘rebellious’ settlements burned to the ground, that the Duke was nicknamed ‘The Butcher’ by political opponents.

Charles survived the battle but fled Scotland to France in the months that followed and would never step foot in Britain again. He died in Rome in 1788 at the age of 67.

Afghanistan: The biometric, social and business data the Taliban could use to target left-behind Afghans