Home » World News » Who is the Real Rukshan?

As masses of riot police with guns drawn moved in on hundreds of protesters occupying Melbourne’s Shrine of Remembrance this week, tens of thousands of people were watching from home through the lens, and eyes, of a videographer known as Real Rukshan.

His high-quality, live-streamed broadcast of the unprecedented scenes, which escalated into the firing of rubber bullets and pepper balls, offered viewers a front-row seat. 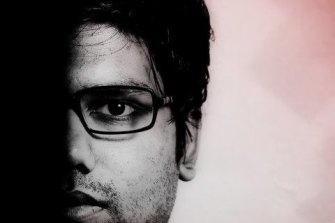 For months Rukshan Fernando, 36, has been a key documenter of the often violent protests that have become an almost daily occurrence in the world’s longest locked-down city, shocking and enthralling a weary populace.

Shot from the centre of the action, and depicting violence from both protesters and police, Fernando’s coverage as an “independent journalist” has captured a live audience of up to 70,000 at a time this week as he tracked the movements of the protesters.

Among the hundreds who gather are many workers out of a job due to lockdown, but the group also includes conspiracy theorists, figures from the alt-right and, at the fringe, Nazi sympathisers. 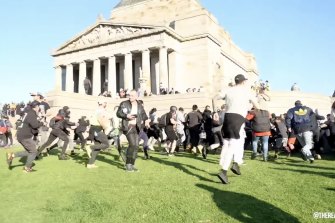 A screenshot from Rukshan Fernando’s livestream of police moving in after protesters occupied the Shrine of Remembrance this week.

Many would be surprised to hear Fernando is the child of life-long Labor-voting Sri Lankan migrants, the director of a multimillion-dollar wedding videography business halted by lockdowns, and a former law student.

“A lot of people are confused about me, especially because of my background, my ethnic look … that there is such a thing as a Sri Lankan, a bit more liberal a bit more conservative, it doesn’t fit the narrative,” Fernando told The Sunday Age this week.

But it’s clear from his footage that the protesters view him as a hero. In a leaderless demonstration, he has become a central figure. His Facebook following swelled to 200,000 this week. In each broadcast he is greeted enthusiastically hundreds of times and congratulated for telling a “truth” the crowd believes mainstream media ignores. 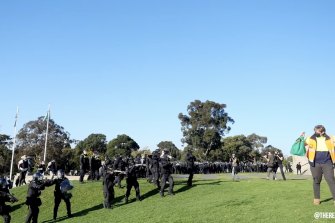 Footage from Rukshan Fernando’s live stream shows police moving in on protesters at the Shrine of Remembrance.

Meanwhile, on this social media Telegraph channel, followed by 13,000 people, he preaches about Premier Daniel Andrews “super-spreading misinformation” and writes “the world is watching Australia in disbelief as our leaders strip our rights, freedoms and dignity”.

Police have twice attended his house in Melbourne’s south-east to warn him not to attend protests – warnings he has ignored.

Academics and sociologists believe Fernando is amplifying a movement that is misguided, especially in a pandemic, and has deeply unsavoury elements.

But he is also documenting the actions of an increasingly militarised police force, whose at times aggressive behaviour would unnerve most Melburnians. 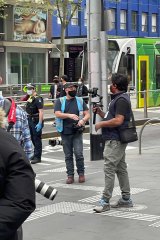 Fernando said he was supportive of Andrews when the first pandemic lockdown began in March 2020.

He began live-streaming the protests earlier this year but says he does not necessarily endorse the views of participants, which he concedes may include a fringe Nazi element.

Fernando was interviewed in August 2020 on a videocast by Tim Wilms, a vlogger notable for interviewing leaders of the Proud Boys, the Australian Patriot Front and Nazis, but rejects the idea the protests are organised by extremist elements, or are used as a recruiting tool for them as has been suggested by union chief Sally McManus and former federal opposition leader Bill Shorten, who described the protesters as “man-baby Nazis”.

“I don’t think it’s representative of the majority of the protests or the intent of the protesters… [though] I don’t deny that they are there.

“I don’t buy into this narrative that it’s led by these people or that they’re the main proponent or setting these things up. They are very fringe. A lot of it is people from different walks of life … they’re against lockdown or mandatory vaccination or they’re protesting against Dan Andrews.”

Fernando rejects criticism of protesters occupying the West Gate Bridge and the Shrine of Remembrance, and suggests the police are the ones putting people in danger, in particular when they have surrounded protesters. He has been pepper-sprayed while filming, as has Age photographer Luis Ascui. A Channel Nine security guard has been taken to the ground and arrested and the treatment of many protesters has appeared heavy handed.

Meanwhile, at least 10 police have been injured – some seriously – when charged at, punched and trampled by protesters. Police cars have been attacked by mobs, the Shrine urinated on, drivers on the West Gate Bridge terrorised and spat on, and suburban streets overrun by mobs of largely angry young men.

Fernando said he condemned those attacking police and the media, and said he believed his work is important because it both documented a movement and captured serious incidents from all sides, though he has at times turned the camera elsewhere when protesters are instigating violence.

“I think it’s very bad that police are put in that situation. No one wants to go to work and get injured. Any deliberate attempts to attack police, hurt them, is not called for. [But] a lot of the injuries are in situations that could be avoided,” he says.

His initial online notoriety stemmed from his creation of memes last year mocking Premier Dan Andrews. One of the most successful was a video edited to show Andrews on a Dr Phil segment with the title “Help me Dr Phil, I can’t stop lying”, another a video comparing conflicting statements from Brett Sutton on mask wearing.

The creation of similar memes helped seed and promote the Trump movement in the US. It is noteworthy that his Twitter image banner depicts the US Capitol building, which Trump supporters invaded in January, injuring police and threatening the lives of senators.

“When you look at humour you can attract people who are not on the political perspective… maybe deep down it will make them question something else,” he said during a 2020 interview on The Discernable videocast.

This week he was interviewed by Laura Ingraham on US cable channel Fox News, agreeing with her that Victoria was becoming like “Communist China”. 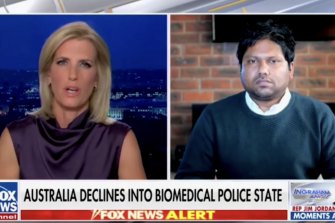 Rukshan Fernando was interviewed on US cable channel Fox News this week.

In other videos on his social media he consistently feeds a narrative that seeks to sow doubt in mainstream institutions and legacy journalists, which he describes as “puppets”.

However, Fernando insists he is not pushing an agenda; he says he is there to document a movement of ordinary people.

“If [a journalist] goes and embeds themselves with the Taliban it doesn’t mean they necessarily share those views,” he says.

“[His videos have] grown him exponentially in the last week. It’s an interesting tactic and style. He’ll attend these protests, film the violence, yet deny responsibility,” Roose says.

“He’s actually part of the problem. It’s not far off inciting this behaviour.”

“He films the spectacular … and seeks to bring in sympathy for protesters in the middle of a pandemic that not only are a health risk but have a record of being violent towards the police … in that sense he’s building their narrative.”

Professor Andrew Jakubowicz, Professor of Sociology at the University of Technology Sydney, believes Fernando is driving a message and cannot be viewed as a traditional reporter.

“[His camera] lens is not an autonomous being that operates independently of his mind. He’s choosing all the time. He’s choosing stuff which feeds that narrative taking control of the streets.”

Dr Francesco Bailo, lecturer in digital and social media at the University of Technology Sydney said protest movements strive to create their own media so they control the message.

“When the level of distrust towards the media is high the movement says we can create the media ourself. They’re protesters and part of the movement but they assume an institutional role.”

But he doesn’t believe the narrative that the movement is driven by the far right.

“I never believe in general the simple explanation, saying that the far right blows some whistle then you have hundreds of people in the streets. The roots of this, the discontent causing this is real … people are not being paid, the vaccine mandate. You have an opportunity for many different movements and groups to try to steer this.”

While some other “independent media” attending the protests make income through their videos and posts, through advertising and go-fund-me type websites, Fernando says he makes no money from his work.

“There’s a perception people in independent media are trying to take advantage of the situation … to try to monetise it. That’s not been my approach. I want to avoid that. I’ve told people not to put up fundraisers. I don’t want to be tied to any particular group of people. I don’t want be owned by these people or anyone.”

Fernando told The Discernable he believed people should get their news from multiple sites and make up their own mind.

“News media sources, I just look at them all with a grain of salt,” he said. “Don’t trust anyone. Don’t even trust Real Rukshan. Do your own research.”