Home » World News » ‘Why are you playing a fool?’: Putin snaps at minister over war planes

Vladimir Putin has accused a Russian minister of “fooling around” and failing to order enough military and civilian aircraft for the Ukraine war.

The rare outburst was directed at Denis Manturov, his trade and industry minister, who was given the task of overseeing Russia’s weapons industry last summer. 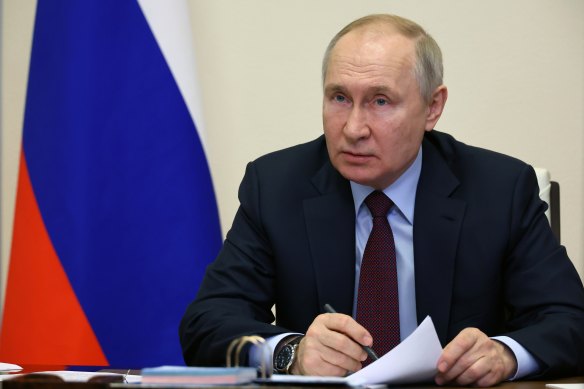 As Manturov delivered his report during a video conference call with leading government ministers on Wednesday, Putin fidgeted and made notes before interrupting him.

“When will there be contracts? Directors have told me that they have no contracts,” the Russian president said, referring to efforts to acquire new aircraft. “You are not trying hard enough,” a visibly angered Putin said. He later raised his voice and said: “Why are you playing a fool?”

When Manturov said he would try to make sure the job would be done during the first quarter of the year, Putin snapped back that it should be done sooner. “You do it within a month, no later than that,” he said.

Manturov tried to defend himself but this appeared to irritate Putin further during his government’s first meeting of 2023 which was broadcast on state TV.

The outburst betrayed the president’s frustration at the progress of his war in Ukraine and the impact of Western sanctions on the Russian economy. He usually delegates his deputies to admonish ministers who displease him.

The Russian air force has suffered heavy losses since the invasion of Ukraine began in February last year and is trying to replenish lost aircraft.

Last year, shortly after the start of the war, US officials reported that Putin was angrily lashing out at his inner circle over Russian military failures.

“This is somebody that’s clearly been caught off guard by the size of the Ukrainian resistance,” Senator Mark Warner, who receives classified briefings as chairman of the Senate intelligence committee, said at the time.

Husband who gave his ex-wife £230,000 divorce payout when they split 15 years ago is ordered to 'support her for life' after she took him to court for MORE money after spending all her cash